Remembering Gregg Allman on what would have been his 75th birthday 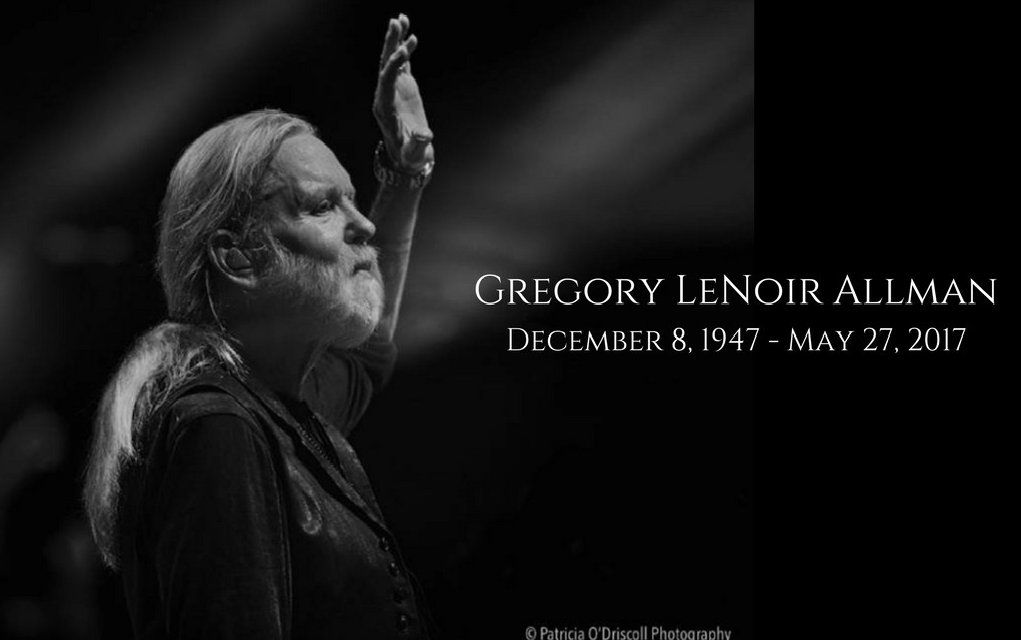 With the death of founding Allman Brother Gregg Allman on May 27th, 2017 the world lost a musical figure of almost mythic proportions. Filled with the blues, Allman endured tragedy, enjoyed glory, and played some of the best music of the 20th century. Here are ten things you may not know about the man.

1. Gregg Allman inspired Duane Allman to play slide guitar – an event that would make him one of the best and most sought after slide players in his tragically short life.

Duane was spending his 22nd birthday nursing a cold and an elbow injury that he blamed on his younger brother cold. Gregg stopped by his house and dropped off two birthday presents: A bottle of Coricidin decongestant and a copy of Taj Mahal’s debut album. Within two hours, Duane had washed the label off the bottle and was using it as a slide to play along with “Statesboro Blues.”

2. Allman’s grasp of the blues came from personal tragedy. His father was murdered in a robbery the day after Christmas, 1949. Gregg had just turned two a few days prior. Years later, while working through issues with a record label, he contemplated suicide.

3. Gregg Allman shot himself in the foot — on purpose. Both of the brothers Allman were against the war in Vietnam, and both had terrible memories of military school.

Duane was exempt from the draft, but at 18, Gregg was eligible. One afternoon in 1965, Duane came up with an idea to keep his younger brother out of the military. They got liquored up at their home in Daytona Beach, Florida, Duane invited some girls over, and they threw a “Foot Shootin’ Party”. Gregg drank heavily, drew a target on his moccasin, drank a bit more, called an ambulance, and then shot himself in the foot. The next day, he limped into the recruiter’s office and got a medical exemption.

4. The Allman Brothers got Jimmy Carter elected. While Carter was Governor of Georgia, he became friends with Gregg and the band, often appearing at their local shows. When he decided to run for president, he didn’t pull much financial backing. It was then that Capricorn Records founder Phil Walden gathered his artists, including The Allman Brothers, and did fundraising shows.

Incredibly effective, they raised over $800,000 for the campaign. Without that funding, Carter had a slim chance of even getting through the primaries. As a thank you gesture, Gregg was invited to share the first meal the Carter’s served in the White House. Not only that, but they ate in the residence portion, where most folks aren’t even allowed.

5. A known addict, Allman was threatened with a grand jury indictment if he didn’t testify against his dealer. He did, but it wasn’t that simple. The dealer, in this instance, was also the band’s road manager, Scooter Herring, who had, more than once, saved Allman from an overdose. Herring received a 75-year sentence, which was later reduced to 30 months. The damage, however, had already been done. His bandmates, and others, considered him a snitch, and in 1976 the band officially broke up.

6. Gregg Allman began recording solo albums 1973. In those days, his solo work was much more soulful than bluesy. In the ’80s, his work ran more toward a blues-rock feel, while his 2011 release, Low Country Blues, finally revealed a true Bluesman. The album is made up almost entirely of blues standards, covered by Allman and select special guests including Dr. John, Doyle Bramhall II, and T Bone Burnett. It also garnered him a Grammy nomination for Best Blues Album that year.

7. The movie Almost Famous has ties to the Allman Brothers. The film was written and directed by Cameron Crowe, who was a teenage writer for Rolling Stone Magazine, and traveled with several bands including The Allman Brothers, while they toured. He used the combined antics of those groups to create the fictional group Stillwater for the film.

The scene in which the lead singer jumps off a rooftop in Topeka, Kansas into a swimming pool, was taken from Duane Allman pulling the same stunt off a three-story Travelodge in San Francisco. Gregg and Dickey Betts also pulled a prank on Crowe, telling him that contract clauses would not allow his story to be published, just before the Rolling Stone deadline.

8. Gregg Allman was married seven times. Three of those before his 30th birthday. He also fathered five children. Three from marriages, and two (his eldest, and youngest) from relationships that did not involve marital vows. Four of his children, Devon, Michael, Elijah, and Layla, followed in their father’s footsteps, becoming not only musicians, but lead singers in various groups.

9. Arguably most famous for playing at the Fillmore East, Gregg and company did many more shows at New York’s Beacon Theatre. Between September, 1969, when they played their first gig there, until their final farewell on October 28th, 2014, they played more than 200 times at the historic venue. Their annual spring appearances ranged between 8 and 19 nights per year.

10.  In January, 1995, Gregg made the conscious decision to quit drinking. Alcohol had fueled not only the Allman Brothers, but most of the Southern Rock bands of the day. At this point, Gregg wrote in his autobiography that he was drinking at least a fifth of vodka per day.

He went on a five day bender while in New York for the band’s Rock and Roll Hall of Fame induction. While intending a heartfelt acceptance speech including thanks to his mother, and Fillmore manager, Bill Graham, what came out was somewhat more abridged. “This is for my brother – my mentor,” he said, then promptly left the stage. Watching footage of it later was the incentive he needed to quit. In-home nurses were hired, and worked in 12-hour shifts to help him kick his booze habit.