"For all the fame and celebrity in which Levon Helm was immersed for decade after decade, and for all the people I saw get starstruck in his presence, who literally could not speak, Levon Helm had absolutely no use for the trappings of fame and stardom." 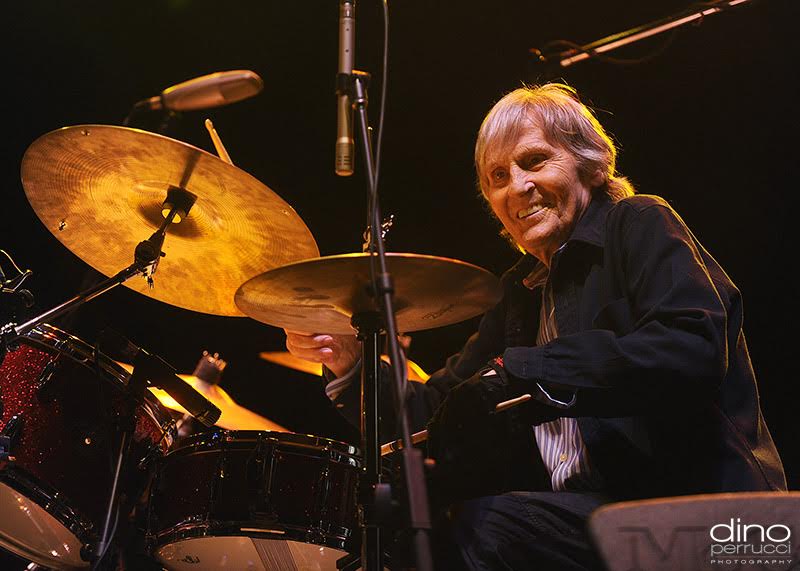 On Saturday, July 31, 2010, I found myself standing next to the refrigerator inside Levon Helm’s kitchen.

This was not out of the ordinary for me on any given Saturday night between, say, 2007 and 2012. I was, after all, collaborating with Levon on a book about his Midnight Ramble house concerts and triumphant comeback following his recovery from cancer of the vocal cords. Levon had also clawed his way out of bankruptcy and saved his home-recording studio, in which I was standing on July 31, 2010, from foreclosure. And all of his efforts, everything he did to get back on his feet financially, it all revolved around the Midnight Ramble.

Levon at this point had also won two Grammys, for two comeback albums, Dirt Farmer and Electric Dirt, that were inspired by the Rambles. And overall, there was a strong sense of triumph in the air at Levon Helm Studios. And nobody knew that a third Grammy, for Ramble At The Ryman, would also be in the cards.

The drummer, vocalist and mandolin player for The Band, who grew up in Turkey Scratch, Arkansas, welcomed fans into Levon Helm Studios, in Woodstock, New York every Saturday night for his Midnight Rambles. The Levon Helm Band sizzled and soared as they evoked the spirit of traveling shows that Levon saw as a kid, as they passed through Phillips County in the Mississippi River Delta.

Mike Gordon of Phish was in attendance that night, as was Oscar-nominated actress Catherine Keener and Oscar-winning actress Jane Fonda. Keener and Fonda were in Levon’s hometown Hudson Valley of New York State filming a movie, Peace, Love & Misunderstanding.

And all-things Arkansas commanded a lot of attention in the Hudson Valley on July 31, 2010. Former President Bill Clinton, who was also the 40th and 42nd governor of Arkansas, was, as the Ramble was proceeding at full steam, celebrating his daughter Chelsea’s marriage about 30 minutes away from Woodstock, across the Hudson River, in Rhinebeck.

But for all that was going on during the evening of July 31, 2010, Levon Helm’s refrigerator is what continues to stand out more than a decade later.

I was standing there, assuming my full and complete “Fly on the Wall” status, just kind of taking it all in, for purposes of the book, when Levon came over to the refrigerator to get some ice. He enjoyed a lot of ice with his Coca-Cola or Boylan’s Grape Soda, which he always drank in one of those red plastic Solo cups, slipped inside another red plastic Solo cup.

I was, of course, watching closely from across the room as Levon chatted with Jane Fonda on the other side of his kitchen table. They were old friends and had appeared together in The Dollmaker, a 1984 television movie.

But nothing could have prepared me for Levon, after filling his cup with ice at the refrigerator, taking me by the arm and saying, “John, let me introduce you to Jane Fonda.” I surely panicked and had no idea what I could possibly say to this movie star. But as you can read in this excerpt from the book that I ended up writing about Levon and the Rambles, everything with Jane Fonda turned out swell. And I ended up during this experience learning plenty about the man from Turkey Scratch, and how he had little use for something that enthralls millions: fame and celebrity.

From Levon Helm: Rock, Roll & Ramble—The Inside Story of the Man, the Music and the Midnight Ramble, which is based on exclusive interviews I conducted with Levon over several years during his Midnight Ramble era:

Levon grabbed me by the arm, walked me over to Jane Fonda and said, “Jane, let me introduce you to a friend of mine.“

For a brief moment, I wasn’t standing next to a rock star and a movie star. I was in the presence of two old friends standing around a kitchen table, talking about old times. Levon had a very gentle way of diffusing any notion of celebrity. He wouldn’t take anything away from anyone’s achievements, by any means. He just reinforced the human side of it all.

Collaborating on a book with Levon Helm brought me to some incredible places, with some incredible people in the room, so to speak. And as you can see from this excerpt from the book, regarding a Levon Helm Band gig at Saratoga Performing Arts Center, north of Woodstock, some instances were most compelling:

The Levon Helm Band shared the bill at the Saratoga Music Festival with Bob Dylan, Steve Earle and Allison Moorer, Gillian Welch and Dave Rawlings, Conor Oberst and the Mystic Valley Band, and The Swell Season with Glen Hansard from The Frames.

At some point during the early part of the day, musicians who weren’t performing were relaxing on a grassy slope off of stage left that was off limits but visible to the public. They were simply watching whoever was playing. I think I might have seen Hansard watching Earle, Oberst watching Hansard. You get the idea.

The last two acts were the Levon Helm Band, followed by Dylan. During Levon’s set, I walked over to where I had seen the performers taking in the show earlier in the day, just to see who was watching Levon play.

I thought I might find Steve Earle over there. But when I arrived, I found Dylan, standing, wearing a hooded sweatshirt, and paying close attention to the Levon Helm Band delivering a driving “Rag Mama Rag.” Dylan’s face was unshaven, and I kept talking myself out of the fact that it was him, standing just feet from unsuspecting thousands, and just feet from me, where I could take about six steps and touch him. Oblivious passersby walked right past him. I only stopped trying to talk myself out of it when I saw a white stripe down the side of Dylan’s pant leg—he was wearing those cowboy pants he so loves.

And there he was, Bob Dylan, so close I could toss a slice of watermelon to him. And for part of “Rag Mama Rag” that night, for a few minutes, he was just like me: one of thousands inside Saratoga Performing Arts Center paying close attention to the man from Turkey Scratch, Arkansas, watching every move he made. “Rag Mama Rag” ended. And Dylan, accompanied by a very big bodyguard, walked off into the darkness and boarded a tour bus.

But for all the fame and celebrity in which Levon Helm was immersed for decade after decade, and for all the people I saw get starstruck in his presence, who literally could not speak, Levon Helm had absolutely no use for the trappings of fame and stardom.

Showbiz, it’s just like any other half-ass biz. There ain’t no fuckin’ rules. You’re better off keeping your word and not fucking with anybody who won’t keep theirs.

And regarding Levon Helm Studios, the Levon Helm Band and Team Levon – the group of volunteers who staffed the Midnight Rambles and played a critical role in Levon’s comeback – Levon said in the book:

Everybody is on the same level. We’re not going to high-hat each other, or put somebody in that stupid-ass role to play, shit: ‘I’m going to play the big star,’ you know; what a dumb-ass predicament that would be.

Like music fans around the world, I am a fan of The Band and I am a fan of the music that Levon Helm made as a solo performer. And while Levon Helm: Rock, Roll & Ramble offers plenty about Levon’s musical side, there is more. This book is about a comeback kid, a guy who never gave up; someone who, when faced with calamity like losing his home to the bank, took a novel approach, as Levon explained in the book:

We were just about at the end of our rope financially. So the Midnight Ramble was going to be one big rent party or go out with a bang. We were going to have one more tear ‘em down night or two, and all of a sudden, the thing started getting legs of its own and people started wanting to come and pay to get in.

…And how did Levon sum up the Midnight Ramble?

The easiest thing I’ve ever done. The whole place turns into a temple for me. There is nothing else, and time and everything else is kind of suspended. All I’m conscious of is the pitch, if the pitch is correct. There are no echoes or fancy sound devices. And about 50 percent of what you hear, even on a full electrical tune, is acoustic. And walking out of your living room and playing a show—it’s the best. It’s the best. Especially the way the room responds.

All I have to do is go shave, take a shower and head out there. We usually stop when it feels like it’s time to stop. When the show’s over, I just walk next door and take my boots off. I believe this might be my payback for all the traveling and stuff. Musicians, their years are like dog years. All that traveling around and now, all of a sudden—I don’t know how we got it to happen. They’re coming here and we don’t even have to crank a car.

Head HERE to learn more about Levon Helm: Rock, Roll & Ramble – The Inside Story of the Man, the Music and the Midnight Ramble.