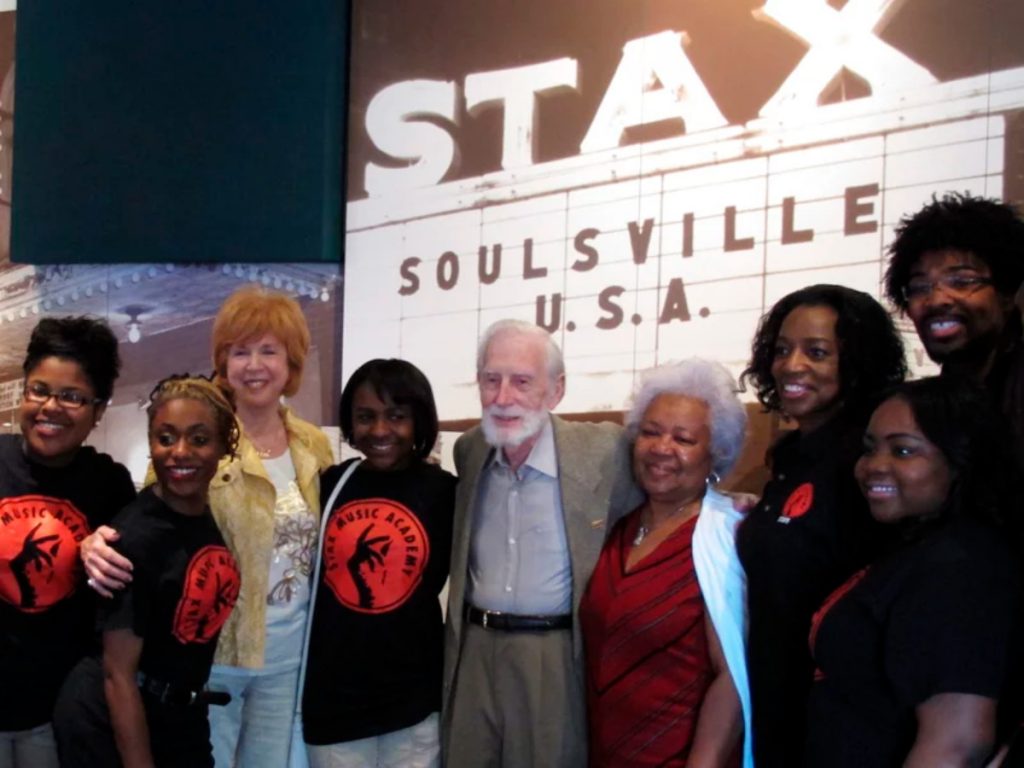 Jim Stewart, the white Tennessee farm boy and fiddle player who co-founded the influential Stax Records with his sister in a Black, inner-city Memphis neighborhood and helped build the soulful “Memphis Sound,” has died at age 92.

Stewart died peacefully and surrounded by his family on Monday, the Stax Museum of American Soul Music said in a news release. A cause of death was not disclosed and funeral plans were pending.

Stewart was co-founder of Stax Records in Memphis, where, during an era of racial strife, white musicians and producers worked alongside Black singers, songwriters and instrumentalists to create the “Memphis Sound” embodied by Otis Redding, Isaac Hayes, Booker T. and the MGs, Carla and Rufus Thomas, the Staple Singers, Wilson Pickett, Sam & Dave and many others.

Stewart was born July 29th, 1930, and grew up on a farm in Middleton, Tennessee, before moving to Memphis to attend Memphis State University and joining a group called the Canyon Cowboys as a country music fiddler.

Inspired by Sam Phillips’ success at Sun Records with artists like Elvis Presley, Johnny Cash, and Jerry Lee Lewis, Stewart began recording country artists on a tape machine in his wife’s uncle’s two-car garage in the mid-1950s and founded a record company named Satellite in 1957. A year later his sister Estelle Axton mortgaged her home in Memphis to help him buy some recording equipment and joined him in the venture. Soon thereafter, he met Memphis DJ Rufus Thomas, who came to Stewart’s new studio, a closed movie theater he had rented for $150 a month and renovated at 926 E. McLemore Avenue, the site of the Stax Museum today. Thomas recorded a song, “Cause I Love You,” with his 16-year old daughter Carla Thomas. The song was a regional hit, brought in some much-needed revenue, and Stewart gave up country music, focusing only on this new rhythm-and-blues music about which he previously knew very little.

In 1959, after learning of a California label with the Satellite name, Stewart and Axton decided to combine the first two letters of their last names to create a new name, Stax.

The auditorium was converted to studio space, and the stage was made into the control room. To save money, Stewart did not level the floor. This created unique acoustics, which are noticeable in the recordings made there, with many featuring a heavy, bassy sound.

Soon, young musicians from the neighborhood started hanging around, helping Stax build a house band that included organist Booker T. Jones, guitarist Steve Cropper, bassist Donald “Duck” Dunn and drummer Al Jackson Jr. — also known as Booker T. and the M.G.s. Booker T. and the M.G.s were racially mixed, as were the Memphis Horns, which backed many of Stax’s hits.

There was so much talent here, under circumstances that were almost considered impossible in Memphis, Tennessee in 1960, with the racial situation here. It was a sanctuary for all of us to get away from the outside world.

Stax and its affiliated record labels released 300 albums and 800 singles between 1959 and 1975, according to the Rock and Roll Hall of Fame. Stax fostered a raw sound born from Black church music, the blues and rock ‘n’ roll. It featured strong rhythm sections, powerful horn players, and singers who could be sexy and soulful in one tune, and loud and forceful in another.

In 2015, a letter written by George Harrison in 1966 revealed that the Beatles planned to record their Revolver album at Stax Studios with Jim Stewart as producer. The group had booked a two-week session in the studio for April in ’66. However, Harrison’s letter states that the session was canceled for financial reasons.

Before Stax went bankrupt in 1975, the recording studio in Memphis’ “Soulsville” neighborhood produced lasting hits such as Otis Redding’s “Dock of the Bay,” Eddie Floyd’s “Knock on Wood,” Sam & Dave’s “Hold On, I’m Comin'” and “Soul Man,” and “Green Onions” by Booker T. and the M.G.s.

Stewart said he turned Stax into a soul and R&B label after hearing Ray Charles sing “What’d I Say.”

I was converted, immediately. I had never heard anything like that before. It allowed me to expand from country into R&B, into jazz, into gospel, wrapped all in one. That’s what Stax is.

The first tragedy to hit the label was the death of Otis Redding and four members of his backup band, the Bar-Kays, in a plane crash in 1967. Then the assassination of civil rights leader Martin Luther King Jr. in April 1968 in Memphis led to riots in the city.

In 1968, Stewart, Axton and Bell sold Stax to Gulf & Western in exchange for stock. Stewart and Bell repurchased the label in 1970.

Stax saw a few more successes in the early 1970s, including the release of The Staple Singers’ “I’ll Take You There” and the Wattstax concert in Los Angeles in 1972. But cash flow started to slow down, bills stopped being paid and lawsuits were filed.

Stewart sold his share of Stax to Al Bell in 1972. Three creditors forced Stax into involuntary bankruptcy in 1975, marking the death of Stewart’s brainchild.

The studio was torn down in 1989. Since then, Stax has been rebuilt and reborn in the form of a museum, a music academy and a charter school.

Stewart, who mostly stayed out of the public eye after Stax stopped making music, was inducted into the Rock and Roll Hall of Fame in 2002, sending his granddaughter Jennifer to the induction ceremony to accept the award on his behalf.

In 2013, Stewart made a rare appearance at Stax, touring the museum before visiting with the teenage musicians who attend the Stax Music Academy. Stewart made a few other appearances at Stax after that, including in 2019 for a news conference to announce plans for the academy’s 20th anniversary.