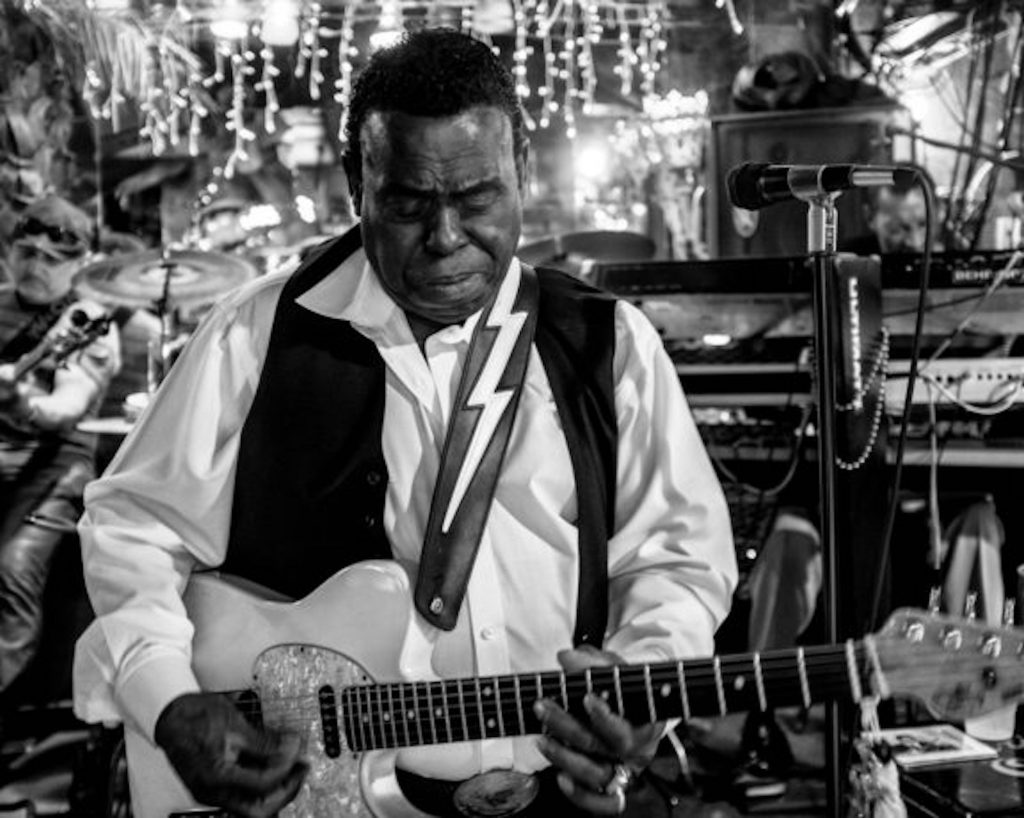 If you were attempting to tie together the forces of Delta blues, soul, R&B, funk, rock and roll, jazz, and even zydeco in a single theory, Ernie Vincent might just be the missing link. The GRAMMY-nominated, Louisiana Music Hall of Famer and his band the Top Notes came onto the New Orleans scene in the early 1970s, playing their own shows as well as backing others like Matilda Jones, King Floyd, Ernie K-Doe, Rufus Thomas, ZZ Hill, and Solomon Burke. “We started playing structured music at that time, Chicago and all that stuff was out. I was learning how to formulate all types of chords. I didn’t solo a lot, and I was putting chords together. We got so tight, and we started playing some Chicago stuff in black clubs. People didn’t know what the Chicago stuff was, but they liked the music.

“These guys were all excellent musicians. That’s when we started, I ended up putting together the ‘Dap Walk’ song because of the structure of the chords. It wasn’t blues chords. From that we started putting together horn parts. I mean, we were tight. We had a very good drummer, and we played a lot. We packed out everywhere. I mean, so we stayed on top of a lot of the late stuff too. You know, James Brown, all that kind of stuff. But I also didn’t lean on everything that went on in New Orleans. We’re from Orleans and we know sax lines. But we went and we did a lot of other complicated stuff with female singers and orchestrations behind it. Then we modified the chords to make it sound like bigger chords. We learned how to do that, and then we did voicing and stuff like that. It all came out on the trumpet, on the ‘Dap Walk’ song. There’s nothing but two trumpets in alto.”

Fast forward to Original Dap King, out today via Cornelius Chapel Records. This latest effort expands the borders between New Orleans R&B and progressive funk of the 1970s, a golden age of backup singers, and finds a chameleon who continues to adapt, weaving history with modern flair.

The album was tracked at Dial Back Sound in Water Valley, Mississippi with Bronson Tew and Drive-By Truckers’ Matt Patton at the wheel, as well as drums and bass respectively. Vincent carefully crafted every guitar solo on the album with Jimbo Mathus on keys, leading the band with Squirrel Nut Zippers’ horns and strings. Taylor Hollingsworth provided extra guitar, and Shaefer Llana with AJ Haynes sang backing vocals.

The recording process reminded Vincent of when he started. “Basically, if I wrote a song, I had to teach the song, then orchestrate the music for them to play the song. And I had ways I did that. Because I only played the three parts: me, bass player, and drummer. But that reminded me how many times I had written songs and also taught people how to sing songs I had written.”

But it taught him, too. “(Dial Back Sound) had a whole new concept of what they wanted to get done. Here I was being taught to do certain things. I couldn’t believe the first night, we ran over three songs and had to go back and touch up stuff. I had to read the song and then start working on fitting in the melodies. I was out there for a week, but we were doing two or three songs from that morning to that evening. It was amazing how it came out, and the reason is because of the musicianship of those guys. I gotta give all of them 100 percent.

“I was learning two songs a day,” Vincent tells me of firing away in the studio at point-blank range. “By the end of the week, we had covered it. It was all good. And Matt was excellent, how he orchestrated stuff. I told him, ‘Matt, you know something, you are one of a kind. You are special.’” The song “Good Daddy,” penned by Matt Patton, is a paramount example of the kind of talents Vincent is referring to. And if you’re not deeply moved by the soaring strings, horn flourishes, and enchanting guitar solos placed brilliantly at the service of communicating the lyrics and vocal character whom Vincent portrays, you should probably check your vital signs.

“It covers all of us,” he enlightens. “All people that work in institutions, like the federal government, police department, sheriff’s department, doctors, lawyers, especially people that are dedicated to the system. The men and women that work it have a real hard time mentally due to the fact – not that they don’t enjoy the work; it’s the pressure. It’s a never-ending task. That’s like a school teacher, same thing. You leave, teach, come back home, you’re at home going over work, then you go back to the same thing over and over. Now what happens with that? And Matt and I sat down and talked about this for about an hour. I said, ‘Matt, you know you’re special, because you’re dedicated to what you do.’ I feel the same way.

“It’s about how we live. In most cases we have marriage, we have relationships that break up because we are dedicated to the cause. It’s not the idea that you’re doing anything wrong; it’s that you’re after completing the task. And not everybody can relate to that. And when they can’t relate to that, then they start slipping away and doing all kinds of different things. You go home, go to bed, and you got on your mind to finish what you started. And that’s what I did with my music. Matt is the same way.”

What’s happening with “Good Daddy,” he tells me, is what every man thinks about his family somewhere along the line. “I’m working this, I’m doing this. I had two kids and my job was to make it work financially. I realized I neglected her to a degree,” he opens up about his wife who passed away just a few weeks before our interview. “You don’t see that when you’re busy trying to make a living. It takes someone special to understand that and give you time to finish that, finish what you want.”

Vincent has been credited with bringing the New Orleans scene to expansion on an international level. As he’s known as something of a musicologist, I wanted to know how he thought New Orleans played an important role in not just jazz and blues, but culture at large. “Well, I did research. New Orleans music is something special, especially Louisiana – the whole gamut of Louisiana. Louisiana plays a lot of country music. Elvis Presley started in Louisiana. Hank Williams lived in Shreveport. Nobody knew about it, but everybody was dancing, and I think it goes back to the zydeco thing. Zydeco really connects to the European system.

“Let me tell you something, 80% of all the music that’s placed all over the world, that’s Louisiana music. Depending on the climate, politically, sometimes that creates a seminar for certain types of music. But I came up under James Brown, Sly and the Family Stone, Gladys Knight, Ray Charles… All these people had a niche. Ray Charles had what you call a big band niche.”

Everybody had something, but Vincent had a little bit of everything. He played his little part in all of it, sounding every bit as good as his heroes, with his small band and inverted chords. Just as “Dap Walk” is more than a footnote to music history a half-century later, for my money the songs on Original Dap King will have arguably even more enduring power. “I wrote what was around me. I wrote songs I heard and liked, and I know other people will like it, too. I did my best to make it work rhythmically,” says the guy who only plays “normal” rhythm when he has to. “When I have to express what I do, it’s not just a normal rhythm… I believe if you’re doing something good and you have a good story behind it, it will never go away.”