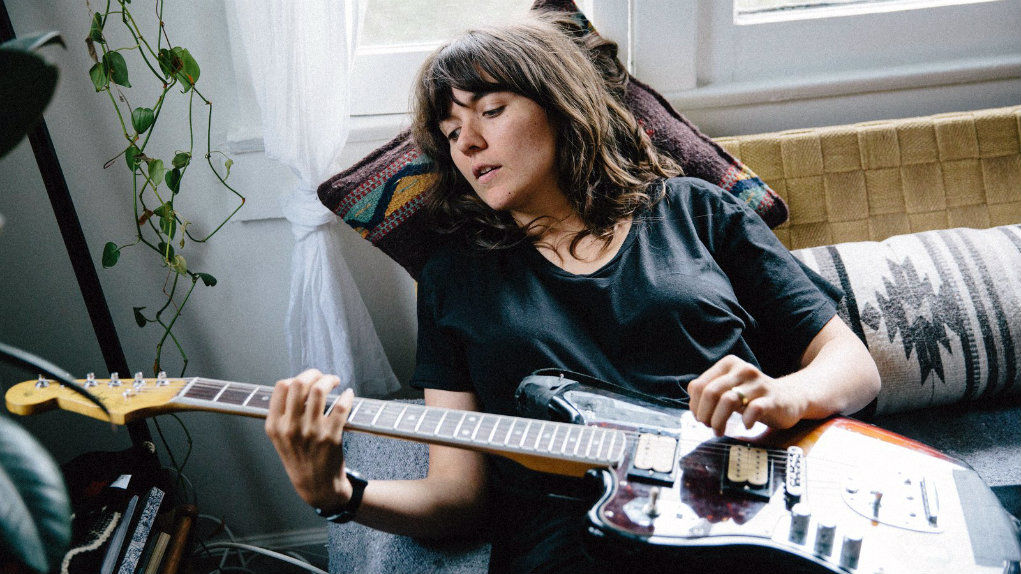 Courtney Barnett: ‘Tell Me How You Really Feel’

Say what you will about what slacker millennials bring to this world, but if they keep producing hard-working, ass-kicking, no-shit-taking, honest-at-all-costs rockers like Courtney Barnett, the music world will be a much better place.

One of my great joys in life is when I discover music. I don’t mean get “turned on” to something out there, which of course is still a wonderful moment. I mean true discovery. Like in the days when you’d go to the Sam Goody or Tower Records and hunt through bins of records, tapes, and CDs to grab something that caught your eye. I mean true stumble-upon-a-gold-mine discovery. I love these moments because it’s like lightning striking your soul. BOOM! The engine is turned on, the roller coaster is at the precipice, and you know someday in the future, you’re going to be describing how you were listening to them way before anyone else.

In this case, that story holds true. Way back in 2013, a great little website called Indie Shuffle (which has a blues category, btw) had a song in their indie rock category called “History Eraser,” by an Australian artist named Courtney Barnett. A driving, walking drum beat with a fuzzed out, grungy guitar cruising underneath the following lyrics: “I got drunk and fell asleep atop the sheets but luckily I left the heater on. And in my dreams I wrote the best song that I’ve ever written… can’t remember how it goes.” Ok Courtney, you have my attention.

It turns out Courtney was one of the young stars of the Melbourne indie music scene, one of the hotbeds for amazing indie rock (Brooklyn, Nashville, Austin, LA, and Reykjavik round out the list). Her fusion of indie rock, folk, grunge, and slacker singer-songwriter ethos somehow blended together into something that is truly special.

There are elements of Pixies, Link Wray, Nirvana, Weezer, and a slew of other artists that infuse her sound. Pick something you like about music and you can find threads of it woven into Courtney’s sound. I assume that you will come away with an appreciation for a sound that is all her own and continues to evolve with her latest release, Tell Me How You Really Feel.

You could call this a sophomore effort, as her first major EP Sometimes I Sit and Think, Sometimes I Just Sit was a critical success. It’s a deserved success, because the album is an evolution in quality and power over her first EP. So whether Tell Me is a sophomore or junior effort, it is both an opportunity for Courtney to further cement herself as not just an indie rock star, but a true rock star, or fall victim to the sophomore slump. The verdict?

Courtney is a rock star, and her spirit animal is Kurt Cobain.

Tell Me How You Really Feel is an album in full, a work of art, that tells a story from start to finish. It presents Courtney as a woman at a crossroads, wanting more from herself and struggling with the fact that in order to get it, she must address a partner who speaks but doesn’t listen, is loved but may not love in return, and ultimately must go. She has grown beyond this person but isn’t cold, isn’t heartless, and often cushions her blows with self-reflection that is simultaneously self-depreciating and brutally honest. You don’t have to be a millennial woman to understand these themes: a desire for growth, pain in loss, anger and frustration at our partners real and perceived faults, and reflecting on relationships that grow fonder with distance. She wants to be told how her partner really feels because Courtney is forcing herself to tell us how she really feels.

“City Looks Pretty”: The perils of life trapped as she becomes a star, watching the world go by as she struggles with the trappings – truly, trapped – that come with her new life. She watches the city from her hotel room, meets people she doesn’t know, meets people she knows who act like they don’t know her any longer, and is weary from her travels.

“Charity”: A song of a lover, tired of her partner’s BS – the charity is the time and honesty she provides her partner, the effort she is putting in while she is tired. So subservient she makes herself sick, while her partner has so much fun. It’s a rocking tale of selflessness and the charity of time & energy that isn’t returned. The one-sided relationship that we’ve all experienced, or been complicit in, or not worked to change, wrapped inside a great guitar pop riff.

“Need A Little Time Out” follows, which is the further unraveling of the relationship alluded to in “Charity.” Courtney sings about needing a break from her partner’s shit, needing a little time out from “me and you.” It starts off as an apology, taking ownership for the issues, but slowly transitioning to a truly cutting takedown, identifying her partner as lecherous, needing to be emotionally exposed (like a shaved head), and eventually being told that they need the time out. The lyrics build along with the music, which starts off with some gentle guitar strumming and ends with a cathartic crashing of cymbals & guitars. It’s a powerful song that precedes the albums first single…..

“Nameless Faceless” – a requiem for the now-dead relationship. Now freed from the baggage of this relationship, Courtney ruminates on the desire to just BE. But the friction between men and women, this partner and her, forces her to stay on guard as the post-breakup vile flows her way. She counters that with the power of her guitar and her own words, which in my mind will always win because Courtney is a bad ass. And she is angry, because what comes next is….

“Crippling Self Doubt and a General Lack Of Confidence” might be the most honest song title in the history of song titles, which is vintage Courtney. She doesn’t hold back, musically or lyrically. Here’s a woman who is now on her own, and like all of us in those moments, doesn’t know how to handle everything around her. She sings, “I don’t know anything, I don’t owe anything” – self-doubt about her own confidence all wrapped up in a rock song. The refrain is a classic and should be shouted while fists are pumped. Her band is locked in on this one, and the song really drives on top of a great rock beat.

That beat drives on in the next song, “Help Your Self.” The title is great because it separates Courtney’s self, as we all do when talking to ourselves in the third person. Courtney is ready to move forward, and this major chord, bluesy, uplifting rocker is an anthem to make it happen. The song opens with a classic back-beat driven drum line, a little cowbell (because, you know, more cowbell), and then a guitar riff you’ll be humming all day. She sings, “You got a lot on your plate, Don’t let it go to waste, Humble but hungry, Need validation. You got a lot on your mind, You know that half the time, It’s only half as true, Don’t let it swallow you.”

“Walking On Eggshells” sits in the next-to-last spot and it sounds like Courtney is ready to look back and feel confident about where she is today, especially relative to where her ex is now (“Say what you want, don’t got a lot, Oh but what I got, I’d give it all away” – as in “you’ve got nothing, I have myself, my honesty, my Self, and I can share that without you”). It’s a powerful statement that’s made beautiful by an almost Byrds-sounding, 60’s infused, piano and guitar (tuned to almost sound like a Sitar) that is Neil Young in its classic beauty.

“Sunday Roast” closes the album, and it presents a final meditation, both in tone and tenor, on this relationship we’ve just watched burn out. In those ashes, Courtney and her partner meet one last time, this time under the auspices of friendship (perhaps a Sunday dinner), and Courtney offers her friendship, her ear, her heart, and her honesty that she will miss this person. The song bubbles along until she opens it up on the back end with an upbeat, uplifting, and up-tempo shift that can’t help but feel like she is wrapping her arms around you as a friend who has been through some shit together.

It’s a proper coda to a true ALBUM, in all caps, in the truest sense of the word. Say what you will about what slacker millennials bring to this world, but if they keep producing hard-working, ass-kicking, no-shit-taking, honest-at-all-costs rockers like Courtney Barnett, the music world will be a much better place.

Title: Tell Me How You Really Feel