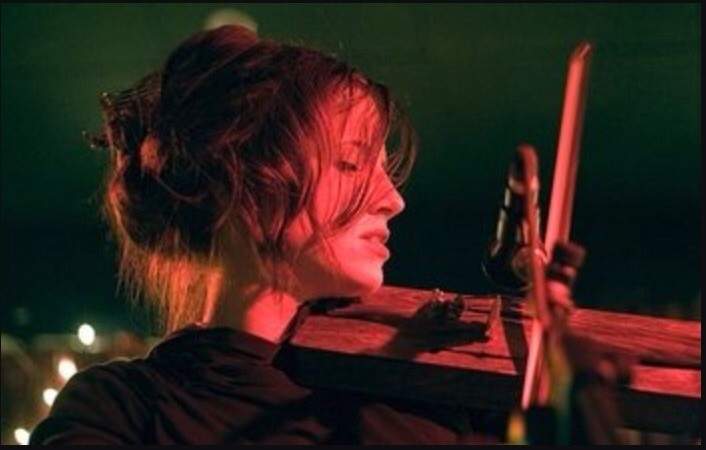 Jolie Holland to Reissue ‘Escondida’ on Vinyl for 15th Anniversary

There’s Bessie Smith, Billie Holiday, and Ella Fitzgerald. And then there’s Jolie Holland: the present day éminence grise of the jazz-folk-blues vein, whose voice so exquisitely demarcates the difference between solid gold and Pinchbeck alloy. The singer/songwriter will be reissuing her first full-length studio album, Escondida, as a limited edition vinyl-only release on January 31st to commemorate its 15th anniversary. Pressed on 140-gram vinyl for optimal audio quality, Escondida will come as two 45RPM LPs.

“It’s been really interesting just looking back. I often think about everything that’s changed in the music industry, how that record was made,” Jolie tells me in response to being asked how she felt about 15 years gone by. In the age of Spotify, she must be proud to release vinyl on her own label imprint, Cinquefoil Records. “Yeah, which is cool. My friends helped me set up crowdfunding on my own website, so it’s really in my own hands.”

How is fundraising going for the pressing? I ask her. “I’m about 16,000 in the hole to just create everything that I’ve made now. It’s expensive to make records. I set the first goal as 20,000. It doesn’t really describe even the amount of work that’s already been done. But in terms of a crowdfunding campaign, it’s going well. It’s over a third funded at this point. It’s been interesting learning how to do all this. I’ve never had to be on social media this much, but I’m doing it every single day.” Admittedly incredulous of social media’s utility, Jolie also jokes that she feels silly using hashtags.

“My cousin works in healthcare, and she works for this massive aids healthcare provider that comes out of really revolutionary organizing. They started out just being kind of scrappy aids hospice organization in the ‘90s, and now they’re the world’s largest healthcare provider for aids. They do all this other stuff to try to protect their clients and the community. They’re doing all this work around making drugs affordable and working on housing. Because they can treat somebody, but if they’re going out on the street then what’s the point? She’s pushing 70 now, and she’s been with this organization since the early ‘90s. It’s so interesting hearing how she talks about mass communication and mobilizing large groups of people and how that’s happened and how that’s changed. But she’s really not impressed with social media. She’s like, ‘The people who are on Twitter think everyone is on Twitter, and the world is not all on Twitter.’ But now I’m on Twitter,” she laughs.

A year before Escondida was released, after having ended up in San Francisco, she established her core trio and recorded a series of demos in friends’ houses and garages. The recordings were never intended for public consumption. But copies were passed along, word got around. Next thing you know, an album as thin on the ground as Catalpa was put on the shortlist of Anti- labelmates Tom Waits and Nick Cave. Waits persuaded his label to sign her at a time when she didn’t have a distributor and could only sell the homemade demos at shows.

The supernova success of Escondida was unprecedented; her journey to that point was spent on the fringes of society, ostracized by family for her emerging sexuality. For years she merely survived, bivouacking wherever she could, legal or not: in a house built on the back of a pickup truck, in a shack by a swamp in Louisiana, and in a tipi behind a wilderness boundary. She and her dumpster-diving compatriots knew how to subsist on just enough food and many pages of Leaves of Grass read aloud to one another. She didn’t know the life of having material things at her disposal.

“And it wasn’t of interest to me. And then the people who I played with were people who were also interested in that nakedness of sound. That was this really beautiful jazz drummer I played with, Dave Mihaly. Brian was less of a willing partner. Actually, he got out of music almost immediately after that record was made. Now he’s a therapist.”

She continues. “I think a lot of people who were professional musicians at that time, who were my age, had grown up with computers and were — and had grown up with money — so they had gear. They were into processing their vocals. For me, it was just all about the present magic trick of live sound. I was never in a position to fetishize gear or get into expensive sound.”

Escondida, meaning hidden, is not so if it makes its way into the right hands. The modesty of the production, as a matter of fact, reveals an unvarnished, soul-baring beauty. “It’s probably quieter than other studio recordings, so maybe it sounds more intimate. I strived for a similar connection through the music on every record. But it was very sparse.”

How has Jolie’s music evolved over time? “I feel like I’m more in touch with my voice now. I think I used to have this ethos of wanting to keep a southern accent in the music, just because I wanted to be honest. Because there were a lot of people around me at the time that had fake British accents. So, that was kind of a reaction against that. I remember the first time I heard Jay Farrar sing, and I was so inspired by his natural accent.” I mentioned Lucinda Williams as another voice not contrived and that which cannot be imitated. “I love her. She’s got such a great delivery,” she agrees.

I first became aware of Holland’s voice in 2006 when listening to an album called Cold as the Clay, which had been released that year by Bad Religion frontman Greg Graffin as his second solo album and first folk album. When I say aware of her voice, I suppose I mean in the most literal sense, as the voice a perfect octave above Greg’s induced a sudden and unexpected frisson coming out of my speakers for the first time.

“Thank you so much. That was really cool working on that. He asked me in, and I met him for the first time in the studio. But yeah, that was amazing. I’ve thought about making a gospel record. I would want to do gospel blues. His music is so direct, and I feel like that’s one of the things he gets from that.”

For other albums, it seems she had muses — Neil Young for Pints of Blood, Townes Van Zandt and Dylan for Wildflower Blues — but for Escondida she tells me, “Probably each song has specific influences.” Like Blind Willie McTell. “I love him. I quote him on that song, ‘Do You?’ “

Holland has been known to say the truth of the Torah is in the telling, to which she applies to the nature of live performance. She explains that it’s not necessarily the individual songs that connect you to an audience so much as the presence of both the artist in their performance and the audience in their presence entirely.

“I don’t think the song is the thing that does it. It’s more about being present in your performance. And it’s interesting; you would think the more popular songs would do that more. But often, your most popular work is the thing that people can pay attention to the least. I encountered that when I was playing a show with Samantha Parton. We played a show in Vancouver, where the Be Good Tanyas started, and it was like — the Be Good Tanyas were a little bit more Canadian popular because of the Canadian content laws. So the people who were there were a little more mainstream audience. They were so bad. They were talking the whole time. It was a place to be seen. It was a thing to do instead of this is music we care about and we’re here to listen. The more popular songs are not necessarily the songs that people are going to listen to more.”

“Sascha,” the opening torch track on Escondida, augurs well — with her voice as a whole instrument — a delivery as mellifluous as a Chet Baker trumpet solo. “Old-Fashioned Morphine” is a portmanteau, two-chord blend of Blind Willie Johnson’s “Wade in the Water” and the gospel standard “Old-Fashioned Religion.” The intro to “Tiny Idyll/Little Missy is the first song Jolie ever wrote around the age of 5 on a Jaymar toy piano. They happened to have a Jaymar at the studio, so that is what you hear.

The free-form jazz and ragtime blues atmospherics of Escondida have much to do with how the album turned out, but there is one song in particular, “Goodbye California,” that stands out a little more to me. While set to Norteño cadences, the inflection with which she carries out her vowels pulls me in the same way an old country song does. I confess to her that I relate everything to George Jones, as if having some kind of undiagnosed mental disorder. And like a George Jones song, “Goodbye California” is distinctive in its originality and singing style.

Relievably, she humors me: “I love that. George Jones is amazing. I really do think that I use my vowels in a similar way to him. He’s all about tone. And in order to make tone, sometimes you kind of distort your words.” She even asked me if I’d read the article that’s been circulating about George Jones being a better singer than Billie Holiday. “Of course he was,” she avows. “She only had 11 notes, Billie Holiday, but she did know how to use them.”

The crowdfunding campaign features some unique rewards for each tier of support, such as test pressings, the Lunatic Tarot deck by Stefan Jecusco, and the 1947 Epiphone guitar she played on tour for Escondida.

“So, there’s the crowdfunding levels and then there’s the Escondida-themed merch. The merch and the crowdfunding are two separate sources. The reason I did that is because I don’t wear T-shirts, and I assume that a lot of people don’t want a pile of merchandise. I was looking at other people’s crowdfunding campaigns and it was like, here’s this level and you get eight items. Some people don’t care about tote bags. So, I wanted to make it more like a choose your own adventure situation. One of the levels is pick an item of merch and these other things come with it. I wanted it to be more open.”

You can also support this campaign by purchasing handwritten lyrics, private command performances, coaching for songwriters, and even by having Jolie tell you one of many real ghost stories she’s collected since she was a teenager. She is currently working on a book of these ghost stories with illustrator Tony Millionaire. “I’ll make a physical thing to sell at shows and online. It’ll be fun. I’ve never made books before.”

The tarot cards designed by Stefan Jecusco were some of the original artwork in Escondida. They are offering the complete Lunatic Tarot deck to the public for the first time with a booklet explaining how to interpret the cards. “One of my best friends made that when he was a teenager, and they’re so brilliant. I was trying to get him to give me more extensive instructions for reading the cards. I was on the phone last night begging him. They’re really funny. The people who made the cards just want you to figure out what it means to you. I’m allowed to tell people in person, but I can’t write extensive instructions, which is hilarious.”