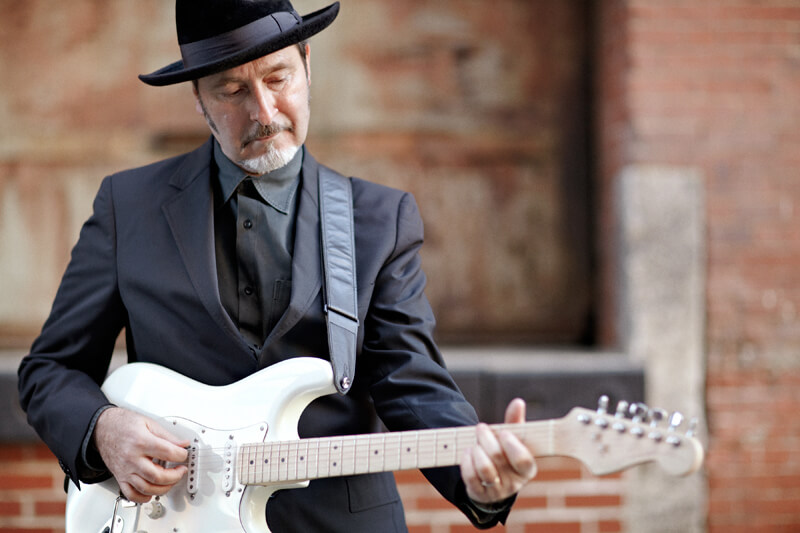 Peter Parcek: Blues Tradition is Just the Cornerstone of His Sound

'Mississippi Suitcase' has been nominated for 2021 Blues Music Award for Blues Rock Album! Be sure to catch Peter Parcek streaming on American Blues Scene's Facebook on Friday, February 26 at 8:00pm EST!

The credits on Peter Parcek’s third solo release, Mississippi Suitcase, cover a century of influences from Delta blues master Sleepy John Estes to The British Invasion’s Peter Green, from an obscure Bob Dylan song co-written with the Grateful Dead’s lyricist Robert Hunter to one by urban rock nihilist Lou Reed. Parcek even does an instrumental version of the Beatles’ “Eleanor Rigby.” And the record’s title cut would appear to be a remake of a song off his last release, Everybody Wants to Go to Heaven. Actually, it’s a completely different song but with the same name. 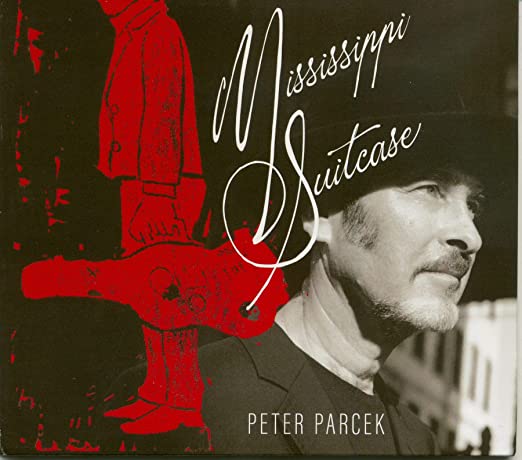 Credits are deceiving. Parcek is a blues original who is deeply inspired by first hand encounters with everyone from Delta progenitor Skip James to British invasion guitar master Peter Green. He’s spent more than a half century honing his own sound. A muscular blues-rock behemoth that cuts like a razor on Vaseline, he’s recently been thrust into the spotlight by this album’s status as a candidate for Blues Rock Album of The Year at the Blues Foundation’s 42nd Blues Music Awards.

On Mississippi Suitcase he breaks down the fundamentals of electric blues guitar and reimagines the genre with same sense of vision that Eric Clapton, John Mayall and Peter Green of Fleetwood Mac first brought to a mass audience during the British Invasion more than a half century ago. And he has the creds to pull it off with elan.

Parcek spent a year in England in the mid-60s playing and listening to the blues-rock masters in London clubs before they became arena headliners. As with many white blues rockers I’ve interviewed, Parcek feels that Peter Green of Fleetwod Mac was the best of the lot. “Eric Clapton is brilliant. Jeff Beck is brilliant, and there are a bunch of others who are brilliant, but for whatever reason, one of the facets of Peter Green that resonated with me was he made me believe it was possible if I could study hard enough and dig deep enough into my soul because I watched him, and it didn’t feel forced or put on.

“I felt like he was really feeling himself, his soul, and I saw him do it in little places. Some of the gigs were really amazing, especially early on. I guess I hit it lucky. I hit it right. I’m not trying to make any judgment. Peter Green hit me real hard. He was in touch with something. Let me put it that way.”

Parcek does a cover of an obscure Dylan song on Mississippi Suitcase “Beyond Here Lies Nothin” that credits Grateful Dead lyricist Robert Hunter as co-writer. “It’s on the Dylan record Together Through Life although it’s nothing like my version. I wanted to try to find a real romantic way to do it. I was lucky I actually got to open for the Dead one time at Wesleyan University in Middletown, Connecticut. The social committee brought them to do an outside show. It was between the two records, Workingman’s Dead and American Beauty (1970).

“There was a real country influence. They played for three hours, something like that, but we played a set in front of them. When we came off stage, Jerry Garcia came over to me, and he knew every reference. He knew the shit I was playing. He knew all of it, and he was really intelligent and really articulate: ‘I heard the Freddie King that you were doing there.’ I mean he could pinpoint it, and then he said, ‘One thing I’m gonna say is don’t drink anything backstage’ which was a really good tip for an impressionable young man. It was a really good thing that he did.” 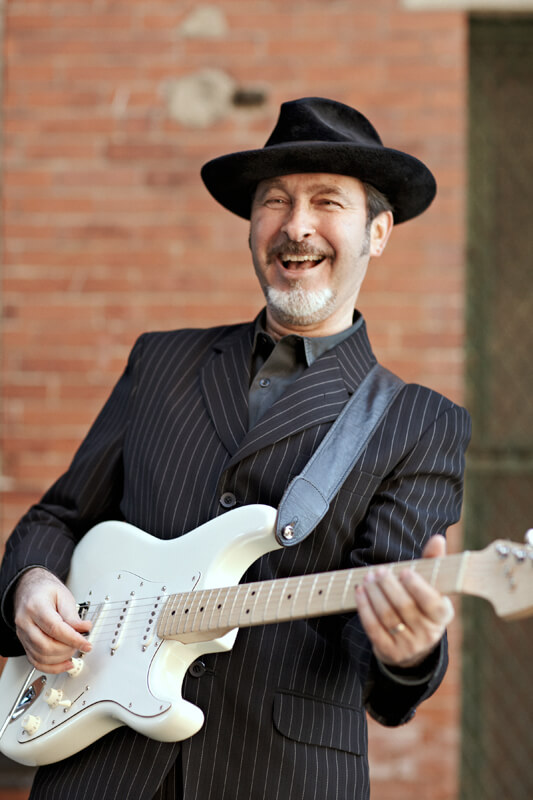 Parcek was scared to meet Buddy Guy. “I was scared shitless. He and I played at the Blues Awards in 2010. I know Tom Hambridge, a great drummer and producer and songwriter whose produced the last bunch of Buddy Guy records. He invited me to come over to the table, and I was still scared shitless.

“I could barely talk to him. I hung my head. He said hi to me and he grinned. I said, ‘Oh, man, I stole everything I know from you. Come on. Pretty much.’ And he was laughing. ‘We all steal from someone,’ basically is what he said in so many words, you know. ‘Don’t feel bad about it.’

“I remember reading your book on Buddy Guy (Damn Right I’ve Got The Blues by Don Wilcock/foreword by Eric Clapton. Woodford Press, 1993). I believe he says in the book the only person who ever showed him anything on guitar was B.B. King. There’s a really great picture of him and B.B. sitting together, and then there’s a section of your book where he’s talking about B. B. being essentially mentoring him. But it had to have been – I’m guessing, but I think it’s accurate. He didn’t give guitar lessons.”

One of Parcek’s earliest inspirations was Delta blues forefather Skip James. He remembers the concert like it was yesterday. “I got to see Skip James at a college one time. He came as part of some cultural program, and they put him in this beautiful room. They had a piano, and he had his guitar. There was no P.A. So, he came in, and the place was pretty packed. He was in a chair, and he began singing and playing. Of course, it was not just riveting, it was transporting, but people couldn’t shut up while he was playing.

“He stopped and said, ‘Mr. Skip would appreciate it if you would stop talking and perambulating when he is expressing his art,’ and then he got up and he walked out of the room, and they had to convince him to come back. When he came back, he didn’t touch the guitar. He goes to the piano and played the filthiest version of “All Night Long” that I’ve ever heard, and I’ve heard people do some filthy versions of basically “Rock Me Mama.” But he was playing whore house piano, and he was grinning from ear to ear. Not only was he brilliant – I think he was a genius – but he was mischievous as heck, and I just totally fell in love with him. Oh, my God. It was such an inspiration.”

Peter Parcek is one of many Boston-based artists who remain regional favorites while those from Chicago or Memphis have a greater international footprint. Hopefully the Blues Foundation acknowledgment of Mississippi Suitcase in its nomination for Blues Rock Album of The Year will change that. I also recommend catching Peter Parcek streaming on American Blues Scene’s Facebook on Friday, February 26 at 8:00 p.m. He will be performing five songs recorded at Q Division Studios in Somerville, MA.

“Mississippi Suitcase (Slight Return)” is one of the songs he will perform. He explains that this, the title song of his latest album, is a completely different song than the “Mississippi Suitcase” on his second solo album Everybody Wants to Go to Heaven.

“The original ‘Mississippi Suitcase’ was an instrumental, a hot instrumental. The inspiration for that song actually came from a cab driver in Memphis. He had told me about his life, and his relationships, and he had given me the title. He was breaking up with his wife and just decided he had to get out of there. It wasn’t gonna work.”

“I just looked at him blankly,” says Parcek, “because I didn’t know what he meant by Mississippi suitcase, and he laughed at me, and I laughed. ‘You’re from the north. You know a green Hefty Bag? Same thing.’

“So, I did that title, and it’s really an evocative title. I had done an instrumental, but it had nothing literally other than the title with the song came on this album. It just came out of nowhere, and it kind of reflects the story this guy told me. A buddy of mine actually produced the track in Memphis. He was kind of living the words to that song at the time. So, it just kinda came through, you know?”

On the American Blues Scene stream he also will perform Frankie Lee Sims’ “She Likes To Boogie Real Low” and Sleepy John Estes’ “Everybody Oughta Make A Change.” But don’t expect his version to take you on the way back machine. When I told him his version of this Delta jewel sounded more like a Roxy Music shimmy, he laughed. “I don’t exactly know what you mean by that. I had been playing the song in John Estes’ style and for good or bad, better or worse, I have a thing about trying to do stuff differently. Not because I can’t do it, but because some part of me wants to create something else.

“So, I had done it like John Estes. I even did it on the radio like that, and I was liking it. So, I said, ‘Ok, we’ll record it like that ’cause I love the lyric.’ And then I was sitting around. I had this amp. It’s got a beautiful tremolo. I just started playing, and that arpeggio just started coming put. And I started singing the words to it, and it was like, wow, here it is. And like somebody’s giving this to me. They’ve turned me into a channel, and they’ve led me here, and they’re giving me a hint. So, I took the hint, and fleshed it out.”

Ted Drozdowski is a veteran music journalist and himself leader of the band Coyote Motel. Ted plays guitar on Sonny Boy Williamson I’s “Until My Love Comes Down” on Mississippi Suitcase. He also produced Parcek’s The Mathematics of Love record in 2009. Ted says of his friend Peter Parcek: “There’s his ability to reframe classic material, whether by Sonny Boy Williamson or Lou Reed, in a way that’s respectful of history and yet resonant in the present. He can be wild and unpredictable, yet resolute as granite. And, like a bonfire, he burns. He is truly a master, and I love this album.”

Today’s blues artists all seem to go through some angst about taking the almost sacred works of the legacy artists and updating their songs and putting their own imprint on them. “I love the straight down the middle stuff,” says Parcek. “Don’t get me wrong. That’s what I love. We did “Until My Love Comes Down,” and it was a lot more traditional sounding. It sounded more like the Sonny Boy 1 recording, but I don’t know what it is in me. (I said) let’s try it a little bit differently or a little bit of something in the approach and that came out. I feel good about it because it’s a Sonny Boy song, but we do what a friend of mine would call “justice” to it as good as we could.”

At that point in the interview, I said to Parcek if everybody went back to the origins, we’d all be pounding rocks in a cave.

He laughed so hard I thought he was going to break the phone. When he caught his breath, he said, “Oh, my God. No shit, you know?”