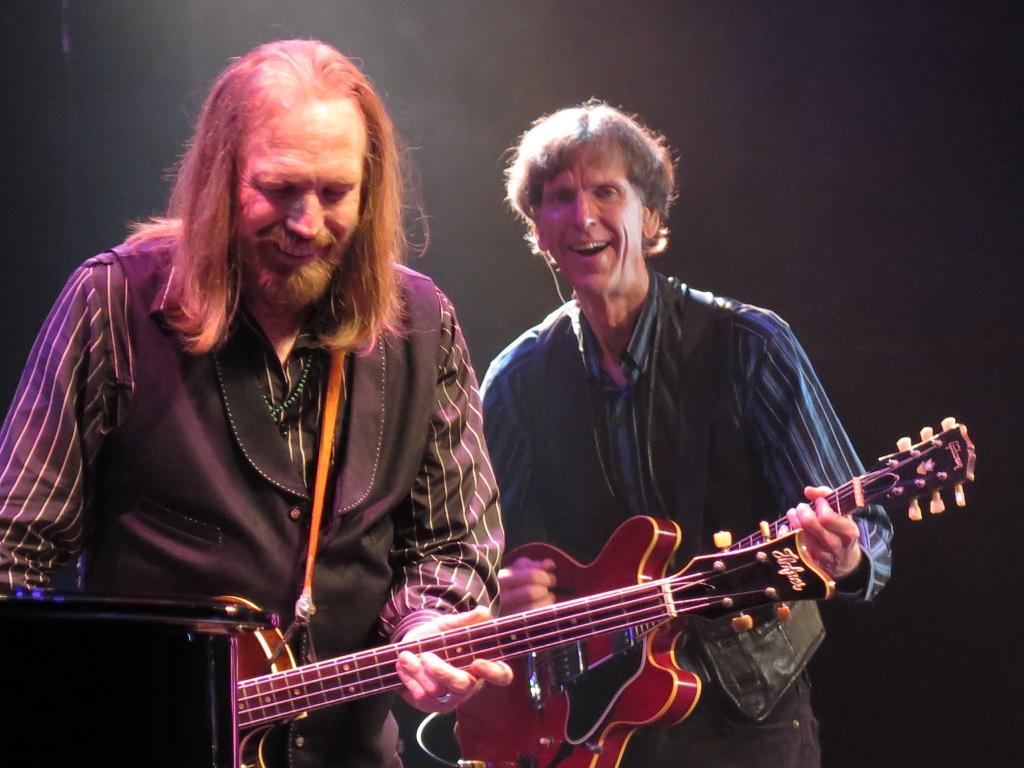 “Tommy was the closest friend I’ve ever had in my life and he was truly a wonderful, unique person who was a natural entertainer and so much fun to be with. And I miss him terribly."

In 1970, after having played in a band called the Epics together, a couple of Toms in Gainesville, Florida found themselves in a band they called Mudcrutch. Tom Petty and Tom Leadon, brother of Flying Burrito Brothers member and Eagles co-founder Bernie Leadon, were just kids when they started meeting in the park to work on harmonies. They liked the way their voices sounded together, and they knew they were onto something.

Before record deals in Los Angeles, there was the nightly gig at Dub’s Steer Room and the weekly music festivals on the Mudcrutch Farm where Petty, Mike Campbell, and Randall Marsh lived and split $75 in monthly rent three ways. Tom Leadon departed the band in 1972, and in ‘74 Mudcrutch had moved to Los Angeles to sign a contract with Shelter Records. By 1976, Petty, Campbell, and Benmont Tench had formed the Heartbreakers with bassist Ron Blair and drummer Stan Lynch.

“We stay down on Depot Street / Just dancin’ in the park,” sang Petty in the disarmingly catchy Mudcrutch single that failed to chart in 1974. And Depot is now the street on which a Tom Petty festival is held. The Tom Petty Birthday Bash at Depot Park was organized in 2017 by Jason Hedges, frontman for Heavy Petty — a local Tom Petty tribute band esteemed by many. This event is scheduled from October 18th – 20th. A block away from Depot Park is Heartwood Soundstage, a venue also hosting a Tom Petty Weekend from October 17th to October 19th.

Leadon performed Tom Petty Weekend last year and is blithe to play it again this year, he tells me. “I feel very glad to be a part of the Tom Petty Birthday Weekend at the Heartwood. It’s always great to come back to Gainesville, my hometown, and it is really special to perform to honor the life and the great music of my dear friend, Tom Petty, right there where I have so many memories of being with him.” Leadon and his band, The Bayjacks, will be playing Saturday night, October 19, at the Heartwood Soundstage. The Bayjacks are based out of Nashville, where Tom plies his trade as a songwriter and guitar teacher.

When Leadon was in Gainesville last year, he was also able to attend the sign dedication and renaming of Northeast Park to Tom Petty Park that same weekend. “I did not attend the first festival because I was in Los Angeles for the funeral, which was October 16. I flew back to Tennessee the next day and I was in no kind of shape emotionally to go out and perform. I can’t remember if I was invited to that first one. I received several requests to play tribute shows right away, but I was not ready to do that until I came down to Gainesville last year. I heard that the first one was a very spontaneous expression of love and appreciation for Tom and his music. And last year was the same, except more organized and on a bigger scale.”

As a longtime collaborator and best friend of Petty’s, the ceremony meant so much to him. “The park, which was known as City Park when we grew up there, was a very special place for Tom and it is still a very special place for me. We both played there together a lot as kids, before we met, then as teenagers we often hung out there together. It was a safe place where no one would hassle us and we could just relax. And I think it was the best possible way that the city could have honored him.”

The disbandment of Mudcrutch always felt a little unsettled — unfinished business and untapped potential. And in Tom Petty’s promethean mind, as with everything else he touched, he always had to tie up any loose ends. He just had to record those albums that Mudcrutch never got to make. Even 32 years later. Leadon received a call from Petty and thought he was joking at first when he told him he wanted to get the band playing together again. “He said that he felt there was some really good music back there with Mudcrutch and that he wanted to finally bring that out where the public could hear it and see what we could do together at that time as a reunited group. He wanted to try to do the same styles of music that we used to do, which was country rock and jam band rock.”

Interviews that Leadon did with filmmaker Peter Bogdanovich in 2006 may have had a hand in spurring the Mudcrutch reunion on as well. The Bogdanovich rockumentary, Tom Petty and the Heartbreakers: Runnin’ Down a Dream, is a full biography organized chronologically with serious depth into the inflection points in Tom’s life that shaped his character and his approach to music. I knew the Tower Road Branch of the Alachua County Library District in Gainesville had a copy, and I may or may not have checked it out a couple dozen times from 2007 to 2009.

“Peter told me when he came to Nashville to film my part of the movie that Tom was thinking about it. Tom‘s daughter, Adria, watched some of my interview from the movie with him (a lot of which was not in the movie) and she says that’s what sealed the deal. That Tom said some wonderful things about me then, how I just loved him and had never asked him for anything, and how he just had to get back together with me.”

And get back together they did, also rejoining forces with original Mudcrutch drummer Randall Marsh. At long last, wishes were fulfilled — for band members and fans. The dirt and decrepitude of the Mudcrutch Farm would not be lost to the detritus of history. The reunion saw two masterpiece albums, the eponymous Mudcrutch in 2008 and Mudcrutch 2 in 2016. It’s well-nigh impossible for me to pick favorites from each, but Leadon can narrow down a few favorites that he is still thrilled to play. “I always loved ‘Wrong Thing To Do,’ ‘Shady Grove,’ and ‘Dreams of Flying.’ ”

“Dreams of Flying” was my favorite on 2. Until, no, “Save your Water” was definitely my favorite. I don’t know. Maybe it’s a tie. From the first time you hear the opening chord of “Dreams of Flying,” you already know it’s going to possess that certain je ne sais quoi of only the finest Petty song. You know, one of his just-under-four-minutes-of-existential-relief kind of barn burners that you can’t listen to at any volume less than loud. “Save your Water” also seems to capture the quiddity of Mudcrutch’s sound — their Southern authenticity — so much so that I was actually curious about it being one of their early originals. “Yes. That was one of Tom’s first songs from 1969, when we still played with The Epics, who were called Mudcrutch by then. He wrote the 2nd and 3rd verse lyrics in 2016, because he couldn’t remember the original ones,” Leadon explains.

“Queen of the Go-Go Girls” from the debut Mudcrutch reunion album reminisces on the Dub’s Steer Room days when they were the house band of the topless bar in Gainesville. I hear Leadon’s guitar work and supernal singing kick in and I’m thinking if your gut is telling you to go with the first take, then you should definitely listen to your gut. “Yes. Everything was live, including my lead vocal, except Tom overdubbed his harmony vocal.”

There could have only been one thing missing from Mudcrutch from the outset, a certain element of refinement, and that is one Benmont Tench. “Yes, he added a lot of wonderful things, including a fullness. When Tom first called me to ask me to do the first album, I asked him if he thought we could could get Benmont to do it, because I knew he would enhance everything so well without changing our essential sound and chemistry. Ben and I had never been in the band together before, except for the couple times he sat in before I left in ‘72. I always admired his work with Tom Petty and The Heartbreakers.”

What can Tom disclose about The Bayjacks’ setlist for this year’s Tom Petty Weekend? “I’m sorry, that is top-secret information. Not even the U.S. House Committee on Rock ‘n’ Roll is going to get to see it, because I’m claiming executive privilege! Just kidding! I can tell you that we’re going to have a few new songs that we didn’t play last year and then we’re going to do a lot of the same ones we did before: the Mudcrutch songs and a Tom Petty and the Heartbreakers number, as well as an Eagles song that I wrote, and several of our originals that will be on our album we are working on.”

And as for what’s next for the Bayjacks: “We want to keep growing together artistically and to try to get some good music out there where people can enjoy it. We will be finishing our first album as soon as we can, and meanwhile I am trying to get our studio version of my song, ‘My Best Old Friend,’ which is about the passing of Tom Petty, finished and released as a single on all the digital music markets — hopefully before we play in Gainesville this October 19. So I better get back to work!”

As I reflect on the 2nd anniversary of his passing, I still feel at a loss. I still feel as though there is a Tom Petty-shaped void in the universe. But I still have the life force of the turntable at my fingertips in perpetuum. I still have his words and music, as I’ve always needed them, to make the good times better and the hard times count for something. For that I am pretty grateful. I am also grateful that these festivals for Tom exist. They are more than just stages with bands. Rather, one person bringing many people together to sing all his songs and celebrate his life on his birthday. For superfans who are surrounded by others who feel the same way, it can serve as a healing retreat.

Tom Leadon leaves me with these words: “Tommy was the closest friend I’ve ever had in my life and he was truly a wonderful, unique person who was a natural entertainer and so much fun to be with. And I miss him terribly. It means a lot to me to come to Gainesville, where we grew up and spent so much time together, to honor his life and his music and to perform for his fans. I am very pleased to have my own band, The Bayjacks, now. I’m enjoying it a lot and I’m hoping that the people there will enjoy our music also.”

For more information on the festivals, visit these websites: