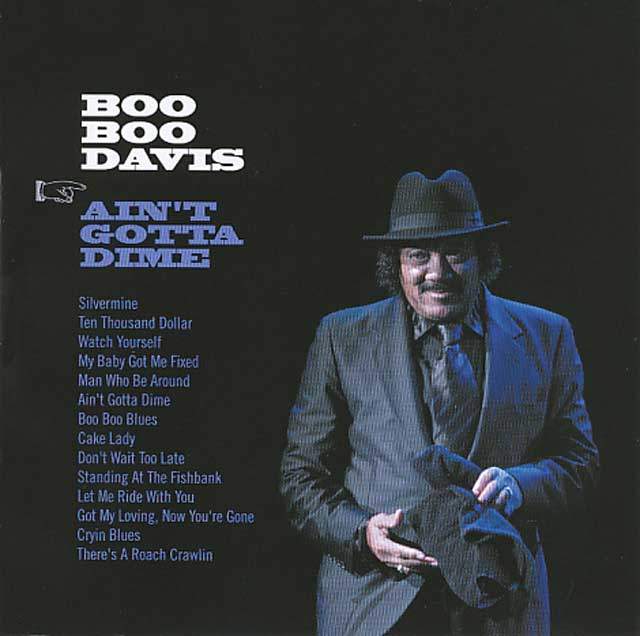 In the summer of 2009 the trio played a string of big blues & jazz festivals all over Europe. During those long travels they got a lot of ideas for new songs. So in the middle of the tour they went into the studio for two days and recorded a new record (AIN’T GOTTA DIME). All songs were played live in the studio without any overdubs and for most songs the first take turned out to be the best one. This is exactly how they sound live. Unlike many modern blues bands, Boo Boo and his band focus on the groove, the feel, and the basic truths found in the blues. Blues doesn’t come any ‘realer’ than this.

Boo Boo Davis is a survivor and belongs to the last generations of musicians that write and play the blues based on first hand experience of a hard life in the Mississippi Delta. He was born and raised in Drew, Mississippi in the heart of Delta. It was the richest cotton land in the South and the large amounts of field workers attracted the best musicians from the surrounding areas. The entire Delta region was rich with blues, but the town of Drew was a particularly fertile one. Charley Patton stayed near Drew for many years and several legendary performers spent time there. Sharecroppers sang loudly to help pass the grueling hours of work and without a doubt Boo Boo developed his loud, bellowing voice based on the singing he heard in the fields as a young boy. In fact, that voice, through the years has demolished many amps and speaker cabinets.

Boo Boo’s father, Sylvester Davis farmed cotton and played several instruments. Musicians who he played with include John Lee Hooker, Elmore James and Robert Pete Williams. Boo Boo remembers these and other musicians dropping by and rehearsing at their house. At the age of five Boo Boo was playing the harmonica and singing in church with his mother. By thirteen he was playing guitar, and by eighteen he was playing out with his father and older brothers under the name of The Lard Can Band. This band travelled all throughout the Delta. In the early sixties he went north to St Louis and was around during the heyday of the St Louis music scene (Albert King, Ike Turner, Chuck Berry and many others). Together with his brothers they were the weekend house band in Tabby’s Red Room in East St Louis for eighteen years.

Even though Boo Boo moved north to St. Louis, he will always be a southerner at heart. When he is at home (and not performing) his favorite pastimes are hunting with his dogs and fishing. During Boo Boo’s childhood there was no time or money for him to go to school so he never learned to read and write. However that did not prevent him to travel all over the world. Following his guiding spirit (that he calls Dave) Boo Boo has found a way to deal with modern society. The blues helps him to keep his spirit high and survive day-to-day life. It deals with all the basic raw elements of life; good and bad, plain and simple.

His first European tour took place in April 2000 and since then Boo Boo is touring Europe at least twice a year. So far Boo Boo has released 5 CD’s on Black and Tan Records and all of them were very well received. Number 4 (DREW, MISSISSIPPI) was listed with the 10 best blues records of 2006 by MOJO Magazine (UK). In 2007 Boo Boo was invited to perform on the POCONO BLUES FESTIVAL, one of the biggest blues festivals in the USA and in March 2007 Boo Boo performed live on CBC Radio One, national radio in Canada.

What started as a crazy idea after the European tour of Boo Boo in October 2007 has turned out to be not too crazy at all. On the Spring Tour of 2008 they decided to leave out the bass and tour as a trio (Boo Boo + drums & guitar). In June 2008 they went into the studio and the CD (NAME OF THE GAME) was released in September 2008.