"One Crow Murder" by Ben Prestage; Many Roots, One Man Band 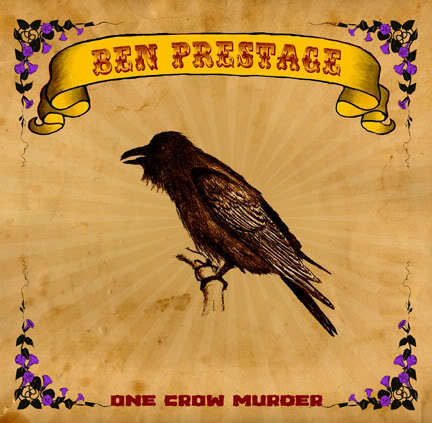 In brief, Ben Prestage plays fine roots music with a one man band twist. His latest album, One Crow Murder, is a diverse work that shows off his well-honed multi-instrument craftsmanship. Murder takes the listener on an exciting trip that spans the breadth of the South’s many influences. Listening to the album, one would never know there was one person playing all of the instruments at once. The drum patterns alone, with the majority of a full drum set playing at any given time, is enough to make one doubt. Yet, Prestage spent a great deal of time busking on the famous Beale Street in Memphis, honing his one man band art form.

The first track, “Tell the Devil I’m Gone”,  has the slide guitar feel & grit of Delta Blues and leaves the listener singing it’s wildly infectious chorus long after the song ends. Ben’s take on the traditional “Take Sick and Die”, despite the humorously macabre subject, is a slide guitar foot stompin’ good time. The gumbo of roots spans across  Vaudevillian, Appalachian, Delta, and even devotes a song to New Orleans with the aptly named “I Wish I was In New Orleans”

As with all true roots musicians, Prestage is a talented story teller. Original tracks such as “The Ballad of Ray and Ruby” and “Three Hots and a Cot” tell sometimes dark, sometimes humorous tales of dynamic characters.

Ben is one of the most tenacious and well respected musicians in his class, taking home 4th, 3rd, and 2nd in three consecutive years at the International Blues Challenge and piling up awards for his Didley Bow and unique playing styles. With it’s uncompromising, infections sound, One Crow Murder is sure to become one of the most celebrated albums of 2011.