The Windy City Gears Up For The Chicago Blues Festival 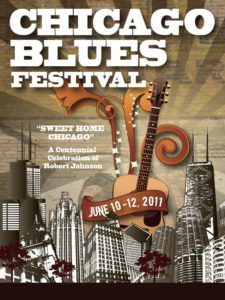 The Chicago Blues Festival, the largest free blues festival in the world, is now less than one month away. Well over half a million blues music fans will descend upon the Windy City for three days of blues bliss in one of the meccas of blues music. Dozens of artists will grace five separate stages, including American Blues Scene favorite Nick Moss and the Flip Tops, Hubert Sumlin, James “Super Chikan” Johnson, Honeyboy Edwards and many more. The festival prides itself on honoring milestones and achievements in the lives of great blues artists, with several artists in the past, such as Koko Taylor and Stevie Ray Vaughan, even receiving their Grammy awards on stage. This year is a particularly poignant year for the festival, however, as it celebrates an artist who, in a single song, may have created one of the most powerful testaments to Chicago’s blues in existence. The Chicago Blues Festival will be honoring Robert Johnson’s centennial birthday, and Robert Johnson’s famous “Sweet Home Chicago” has, in turn, been honoring the city for a few months shy of 75 years.

Created in 1984, the Chicago Blues Festival is located at the lakefront Grant Park. It has earned it’s reputation with years of top-notch stand out acts, including B.B. King, Bo Diddley, Buddy Guy, Koko Taylor, Stevie Ray Vaughan, Ray Charles, Chuck Berry and Keith Richards, Little Milton, and many, many more.

The Windy City Blues Society, Chicago’s premier volunteer blues organization and one of the most prominent blues societies in the country, will be hosting a free “Street Stage”. This year, the acts on the WCBS stage could rival the City of Chicago’s four main stages, with performances by Kilborn Alley, Cashbox Kings, Willie “Big Eyes” Smith, Nick Moss with special guest Curtis Salgado (an ABS favorite), Lurrie Bell, and Rob Blaine with Peaches Staten. Nick Moss, Rob Blaine and Peaches Staten have all received rave reviews from critics and the American Blues Scene alike. Rob and his band, Big Otis Blues, came in third at the IBC. Nick Moss has racked up 15 Blues Music Award nominations for his endlessly powerful guitar, songwriting, and singing work. Curtis Salgado won the Blues Music Award for “Best Male Soul Blues Artist” last year. Willie “Big Eyes” Smith has been a revered, Grammy award winning, Chicago blues legend for decades. With this much talent packed on the Street Stage alone, this year’s festival is guaranteed to be unforgettable. More information on the Street Stage can be found at the Windy City Blues Society’s facebook page or on their website.