Allen Whitley's "Where Southern Cross The Dog"; An Excellent Novel 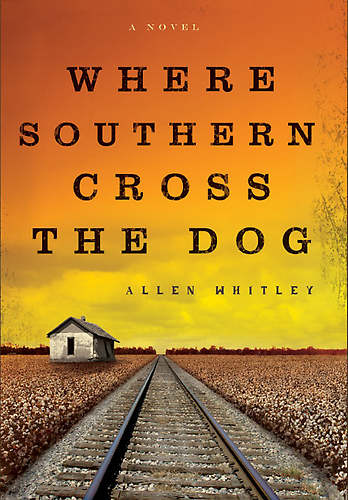 Allen Whitley is an Austin-based author who’s latest fiction novel, Where Southern Cross The Dog, is a blues gem, romping through the 1938 Mississippi delta on a wild adventure through murder, dancing, cotton, nazis, and a transcension of the Jim Crow racism that was so prevalent in the day. Yes, we said Nazis.

The book is set in Clarksdale, Mississippi, known by many as “ground zero” for blues music, because of the great many bluesmen and music to come from the area. The characters are rich and entertaining, and the book starts out on a slow simmer, much like being in the Mississippi Delta on a sweltering August day. The novel fires up fast, as a gruesome and mysterious murder by the Sunflower River, followed by another, then another with no leads, casts terror and fear over the town. Meanwhile, a German inventor is diligently working on the world’s first cotton harvester at a nearby plantation, which many will recognize was inspired by the world famous Shack Up Inn, and he’s a spy for the Reich. The invention, pending it’s success, threatens to make the livelihood of the area’s many sharecroppers obsolete, and casts further tensions upon the town, and the delta at large. The novel’s main character, a young man named Travis from the affluent white neighborhood in Clarksdale, meets Hannah, a teenager from the affluent black neighborhood. Though they live less than a mile apart, the two live in respective cultures and Jim Crow antiques that are worlds removed from one another, which they quickly overcome to form a close bond. The characters are an expertly written story of affection against all odds and societal norms. Before long, Southern Cross The Dog is nearly impossible to put down, as the characters find themselves in the midst of suspense, arson, Mississippi river boat chases, and, of course, the blues.

Overall it’s a fantastic book, one that immerses the reader in the endless cotton rows, diverse and captivating characters, and the infectiously simple and entertaining rituals of the Mississippi delta. Allen Whitley does a praiseworthy job of capturing the heart of Mississippi, and bringing the reader into not only a day-by-day, Jim Crow-era delta, but also a seamlessly woven world of mystery, tension, and endearing characters. The suspenseful tones of the novel will keep any reader yearning for just one… more… chapter… As a result, this is one of the few novels that can be read time and again. Fans of the blues, the delta, or suspense will find an excellent read. As an added bonus, the novel comes with a CD containing twenty tracks of real field recordings of the time, made by 1930s and ’40s residents in and around Clarksdale, and hand-selected by famed anthropologist and blues musicologist Jim O’Neil. The CD is a fantastic and thoughtful addition to set the mood of the time. Whitley has made the first chapter of his novel freely available on his website, AllenWhitley.com. Price point is only $24.95 for a hardcover on Amazon, but can be purchased for $5 off through Allen’s website!

Purchase a copy of Where Southern Cross The Dog on Allen Whitley’s Website for $5 off!

Read More and the first chapter of Where Southern Cross The Dog on Allen Whitley.com