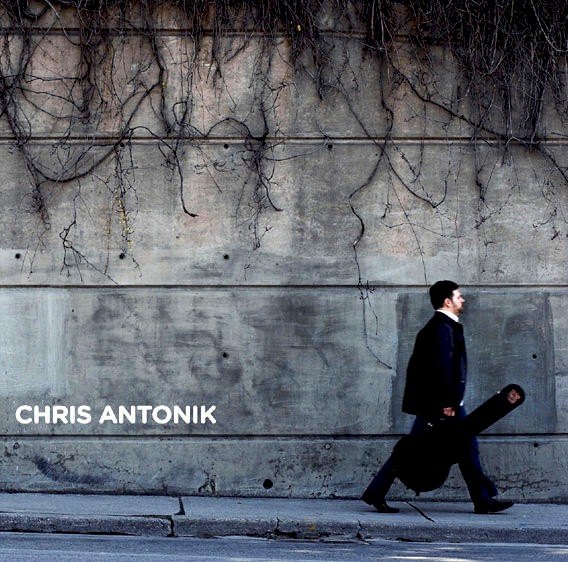 The cover of Chris Antonik's new self-titled album
Share
Facebook Twitter LinkedIn Pinterest Email
CHRIS ANTONIK is a hard working, sharp dressing Canadian blues guitarist and vocalist who’s gaining a lot of support in the blues community lately. He’s a relative newcomer on the scene, but he’s already broke into the 30s on the Roots Music Report last month for his new self-titled album! We were privileged to sit down for a few minutes of face time with Chris.

Chris, you just recently came out with your new self-titled album. I hear it’s making waves. Tell me about the reception?

Yes, my self-titled record “Chris Antonik” was released this past August. Blues radio in Canada, the US and Europe have been spinning it. While some US stations are playing it, I really want to increase the exposure in the US. I am thrilled with the reception. It gives you a great boost to keep on growing and becoming an even better guitarist, songwriter and singer.

I just found out last week that I have been nominated for a Maple Blues Award in the “Best New Artist” category (these are Canada’s national awards for achievement in blues music). I am so honoured by this and I am still digesting it. It’s quite surreal. The blues community here is so supportive of emerging talent and of helping them learn and grow. What an amazing feeling.

What “style” of blues would you say you play? Your album’s got a bit of a delta twang at times, and at others it simply rocks. Can you tell me a little about what you’re doing?

It’s interesting. There are a handful of traditional blues styles on this record and quite a few other styles. I see the album more as a contemporary blues-rock record laced with a couple traditional numbers. Given the variety of styles on it, in a sense this record is my tribute to the broader genre. It’s also, in a sense, a reflection of my love of music – we even have an alt-country, acoustic song closing the record.

I think the various song structures on the record essentially try to pay tribute to a number of influences. For example, on “More to Give,” I am inspired by early 70’s Clapton/Derek & the Dominoes-type material. “Roll with It” is a tip of the hat to the short and sweet sensibility of JJ Cale. “The King of Infidelity” pays homage to 1980s radio blues rock. There is also a BB King-inspired double shuffle, an instrumental dobro song, a 70’s horn-based blues funk tune (the “She’s a Burglar” cover) and the minor key “Double Trouble.” “Reap What You Sow,” is a slow, crawling, southern, Allman-esque blues rock thing. That was fun recording that one!

As you can see, I am all over the map! I guess I just love blues music. Ultimately, what I set out to do was create smart and interesting vehicles for guitar playing, while paying close attention the importance and priority of good song-writing.

“King of Infidelity” is one of my favorite tracks on that album; so soulful! You’re on the Roots music report this month. Where are you planning on going from here?

Feels great to have to the record charting and to see yourself up there with all those names….very cool.

From here, we are honing a solid live act for the festival circuit in Canada in 2011. I am based in Toronto and other parts of Ontario, but we’ll try and get out there as far as we can as The Chris Antonik Band in 2011. The core players from the album will be along for the ride – Josh Williams (vocals, organs), Andrew Taylor (bass) and Chris Chiarelli (drums). With the Maple Blues Award nomination now, I am hoping that will open the door to some really cool gigs in 2011. In addition, as someone keen on becoming a better singer, our live show will allow me to continue to grow in that area.

How did you get into the blues? How has it affected you?

I can’t explain it. One day, it just became apparent that this language on the guitar was something I was meant to tell stories in. I could always see notes in my head. I actually started my fascination with guitar soloing with Neil Young and Santana. I was fascinated with how deliberate and well-phrased their soloing was. How they could string ideas together on a fretboard – and how structured the fretboard really is while still allowing endless emotional note-bending, nuance and storytelling. I am sure its common for many players to start out like that. This led me to John Mayall’s Blues Breakers record with Eric Clapton – that blew me away. I was obsessed with playing in that style. Everything just stemmed from that – Freddie King, BB King, etc, but mostly Buddy Guy though. While I think Clapton and Freddie King have the most influence on me stylistically – Buddy is where I go when I need to find my voice again – that special place that only he can go – it is so inspiring…the way his Stratocaster becomes a visceral, soulful and unpredictable extension of himself. Truly mesmerizing. My wife actually took me to see him as a surprise gift last year. We were in the third row! That’s the technical side of how blues affects me. Emotionally, this was the outlet that chose me – it is where my strengths are in terms of expressing my appreciation for life and those around me.

Lately, I have been getting deeper into Muddy Waters and all the old Chicago players. On the side, I play in an old-school Chicago-type blues trio with a great harmonica player based in Toronto named Mark “Bird” Stafford and another guitarist, Pete Schmidt. Pete has played with everyone up here and I learn a lot from him. We do Little Walter, Sonny Boy Williamson, Jimmy Reed, Jimmy Rogers, Muddy, Howlin Wolf tunes. For this project, I needed to go back and listen to what these players were doing – how one of the players would effectively be playing basslines, etc. Not as many solos. Just structures and tone. I thank Mark Stafford for pushing me in this direction for the side project (whereas the Chris Antonik Band will be more contemporary).

You’re a Canadian bluesman. Tell me about the blues scene in Canada?

The scene here is full of incredible talent and supportive fans. We also have some considerable funding for blues festivals, societies, and other events. A lot of our folks have also done very well done at the International Blues Challenge. For example, the amazing Matt Andersen won it last year. Of course, the late, great Jeff Healy was from Canada. It was such a huge loss when we lost him.

You’re a pretty snazzy dresser; always wearing clean cut suits. It brings back memories of Muddy Waters, always dressed to the nines. Most people don’t expect a bluesman to dress like that. Why do you do it?

Haha…thanks man. I will tell my wife you said that. She’s also my stylist!

Who are your blues heroes and influences?

Thanks a lot for taking the time to share your thoughts with us! Any parting words?

Thanks Matt and keep up all the great work you do supporting the blues!

You can hear samples and pick up a copy of Chris Antonik’s great new album at Bluescentric.com, chrisantonik.com, or on iTunes!