Doyle Bramhall, one of the legendary 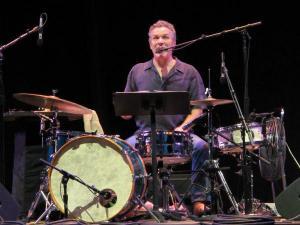 Austin drummers and a noted songwriter, passed away this morning.  He was 62.

A fixture in the Austin Blues Scene  and originally from Irving, Bramhall was friends with Jimmy Vaughan in high school. They played in The Chessmen before both migrated to Austin., where Bramhall formed The Nightcrawlers with Marc Benno. Young Stevie Ray Vaughan was the second guitarist in the band.

A solid drummer and a gravelly singer, Bramhall wrote several songs that were cut by Stevie Ray Vaughan including “Life By The Drop” and “Dirty Pool.” Bramhall was a huge influence on Vaughan’s vocal style. Bramhall released his first solo album, Bird Nest On the Ground, a stirring mix of originals and jaw-dropping covers such as Elvis Presley’s “(Marie’s The Name) His Latest Flame,” in 1994.

Bramhall was also a key cog in the blues renaissance that took place in Austin in the mid-70s. That core group included Tommy Shannon, Angela Streheli, Lou Ann Barton, the Vaughan brothers, and Benno, coalesced around Antone’s, one of the first music venues to open on Sixth Street in Austin and Austin’s most important blues venue at the time. Family Style, the only Vaughn Brothers album, featured Bramhall on drums.

Bramhall is survived by his wife Barbara Logan, his daughter, Georgia, and his son, guitarist Doyle Bramhall II