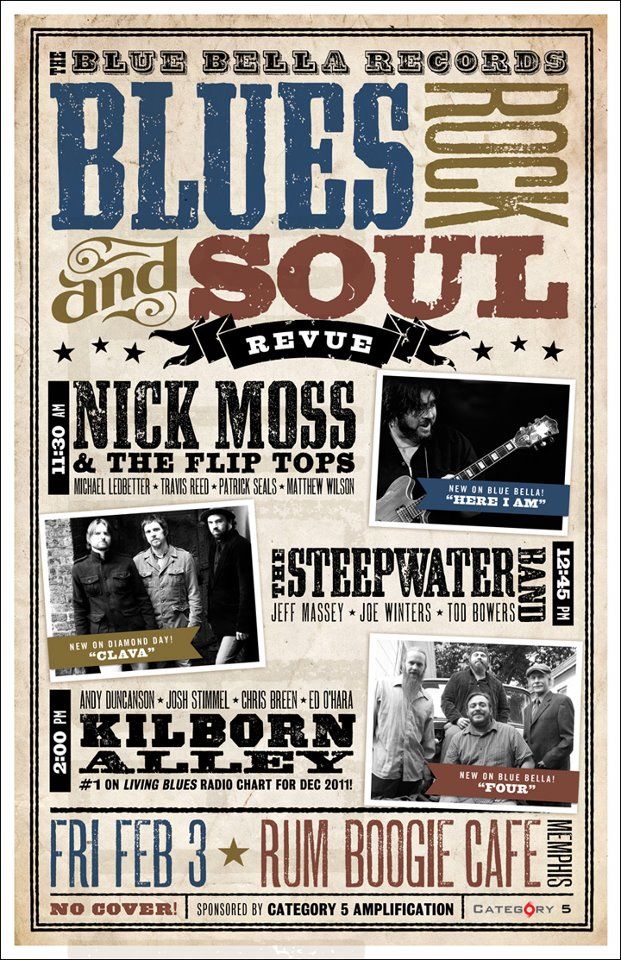 The Blue Bella Blues, Rock and Soul Revue is finally here! Blue Bella Records will be showcasing  Nick Moss and the Flip Tops, Kilborn Alley, and the newcomer Steepwater Band at Rum Boogie, famously sitting on the corner of the original Highway 61 and Beale Street. Rum Boogie is one of the most reliable places to catch live blues music at any given time on Beale.

Nick Moss, as we previously mentioned, is a long time Chicago Blues master who has been pioneering a new style and sound in the blues, winning accolades and fans across the country. Kilborn Alley, who’s most recent album we reviewed late last year, is an exciting blend of blue-eyed soul and gritty rock.

Nick is up first, and, as usual, blowing the roof of of the Rum Boogie Stage, (which has the original “Stax” from Stax Record’s neon sign sitting over it).

Several prominent labels, talent agencies, and blues entities host “Showcases” at various bars on Beale. Showcases are always free, and are a great way to discover talented, established acts from some of the best blues agencies and labels in the business. Since all showcases end before the nightly competitions begin, the worst choice a blues fan on Beale will have to make is which showcase to check out!