"One Night At Reds" DVD is a dramatic Delta Blues Experience 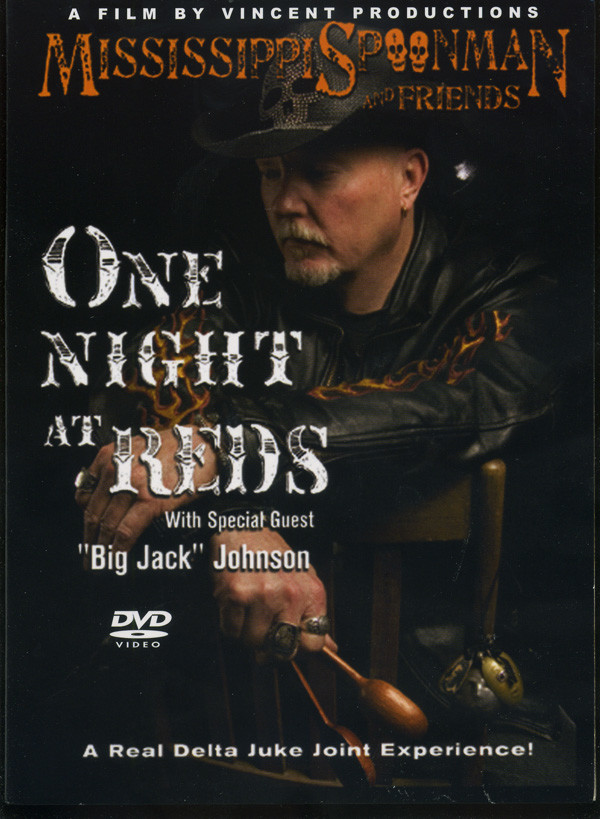 When a DVD showed up in our review list featuring the Mississippi Spoonman at a tiny Juke Joint, we knew we were in for a good time.

The premise to One Night at Reds could not be any more powerful: They say April showers bring May flowers, but the night this was filmed, as tornados touched down all around Clarksdale and power flickered on and off, the blues played on.

Played on they did. The spoons clacked out an intricate percussive beat while Spoonman sang razor sharp vocals and special guest Big Jack Johnson sat against the wall playing lead guitar, looking as cool as he ever had.

Filmed in Red’s Juke Joint, the famous little place on Sunflower Ave. in Clarksdale, Mississippi, the DVD is a juke joint experience in a box. Bobby “The Mississippi Spoonman” Rowell, and Big Jack Johnson, who died a year ago this month, are the main attractions in this foray. They start off playing at Reds, with scenes in between song breaks showing the two men sitting and enjoying a delta afternoon on Big Jack’s front porch, and Bobby at home in his studio with all manner of mystical curios. “I’m a spiritual person,” he says while holding John the Conqueror Root, a twinkle in his eye.

Though the music was hot inside the joint as they burned through Jimmy Reed and Muddy Waters and some original music by Johnson, hints of how bad the storm was were prevalent. Rainwater was literally pouring into the tiny building on the Sunflower River, and deep puddles were forming in the floor as the rain streamed through the ancient ceiling. Steady streams of water can be seen flowing right past the Spoonman’s head from nearly every camera angle, and the occasional thunderclap that was too loud to be mixed out sneaks into the sound. Nonetheless, the delta entertainers and the thrilled audience partied away, unaware of anything raining down but great blues. The surely unintended atmosphere couldn’t have been more dramatic, and added a powerful touch to the already entertaining scenes.

The Mississippi Spoonman has been a musical landmark in the Arkansas Delta area, as many who attend King Biscuit Festival in his hometown will attest. Spoonman’s got an excellent and poignant voice – cutting into the mic and singing with a rare degree of intensity. Playing the spoons may sound like a novelty at face value, but seeing the wide array of percussion and careful intonations, it becomes clear that in the hands of the Spoonman, who was handed down his handle by none other than James “Son” Thomas, those well worn pieces of carved wood become something unmistakably unique. The spoons contain a primitive quality, and break the normality of percussion in an enchanting way.

It shouldn’t be a surprise that the DVD is such a great delta blues experience. The Mississippi Spoonman, along with another Delta staple, Bill Abel, beat out 80 other acts, ascending to the finals in this year’s International Blues Challenge, and One Night at Red’s makes it obvious why.

There’s roughly 45 minutes of main footage, along with a load of interesting extra scenes. The deputy director of the Delta Cultural Center talks Helena’s History. Extended footage of the two friends, Spoonman and Big Jack Johnson on Jack’s front porch is fun and feels like a peaceful spring afternoon. There’s also extended footage of the Spoonman talking about his craft, which he’d been honing practically since birth, and even a beginner’s lesson from the Spoonman himself on playing the Spoons!

Overall, this is a great little “real deal” delta juke joint experience, and would be right at home in the hands of any blues music fan!