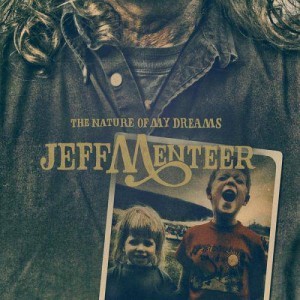 Jeff Menteer is a guy who went from high school bands to college bands, decided money is what he wanted, and ended up working the planet from Prudhoe Bay, Alaska to Saudi Arabia. He crewed on a 100 ton sailboat transiting the west coast of the Americas, then through the Panama Canal into the Caribbean. He settled down, and started into his music again while raising a family. He was getting ready to do his taxes before our interview. Sounds like a dream doesn’t it?

So what does a song writer aspire to — what do they dream about? Their own album, right? Such is The Nature of My Dreams. And the music! This album opens with “The Great Mystery That Surrounds Us”, a tune that has a definite Latin groove and as he said, was inspired by the movie, Motorcycle Diaries, with percussion by Rick J. Bowen. Shades of Santana’s Abraxas! Mui Bien!

Three of the 12 original songs on this CD are instrumentals, showing off great songwriting skills. “There’s Got to Be Something” features a Scotty Harris sax that reminds one of John Klemmer, and the opening weaving of the sax and guitar is so deft. Then the piano of Stacy Jones rolls into the picture, and there’s definitely something! “Ford Shuffle” is a laid back trio piece with shades of Mark Knopfler, and a beautiful bounce stroke by drummer Rick J. Bowen. The hat trick of instrumentals closes with “Good Question”; perhaps an appropriately titled last song (what’s next?) that has a great jazz feel with Robben Ford tints.

Having helped Stacy Jones Band of their recordings, the favor is returned, and Stacy’s skill on the harp and keyboards show up in “I Hope I’m Wrong”, “Honk Honk”, and “Back Again”. Elements of Chris Rhea, rockabilly, and a great 12 bar number reminiscent of old opera structure: instrumental sections punctuated by unaccompanied vocals. A great vibe and punch from the Tom Jones/Rick Bowen rhythm section.

A couple of tunes have a bit of an alt country rock punch, “So Much For So Little”, which had a reminder of Pousette Dart with a Layla-like ending with Randy Oxford on the trombone in the back. “Lonesome Dave” is a slide on a triplet rhythm structure, which is very cool. Doesn’t the title just scream a country boogie song!?

“Weak Weak Man” has Stacy Jones on backing vocals and harp, a straight up blues groove with a slight Bo Diddley drum piece, “Walking On Ice” has the delta slide smoothness meets LA edge and moved north, and another jazz feel to “With You”, featuring Susan Sims on vocals.

This is a dream you have to hear, and frankly, look at to appreciate the whole. You see, the album cover itself is part of the dream. It’s his debut of his own material, and there on the front? Another part of his dream: a picture of his children. And how that very album cover came to be as this dream manifested, in the right, but not initial artist, came along.

An artist shows off his influences no matter what. Jeff Menteer is no different. Many things influenced his dream, a dream that came true. He played in the Stacy Jones Band and now also with his own band, Beaten Path. It might have been a long time coming, but The Nature of My Dreams came true.

Find out more about Jeff Menteer at his Official Website