Magic Slim Passes Away at 75 – OBITUARY 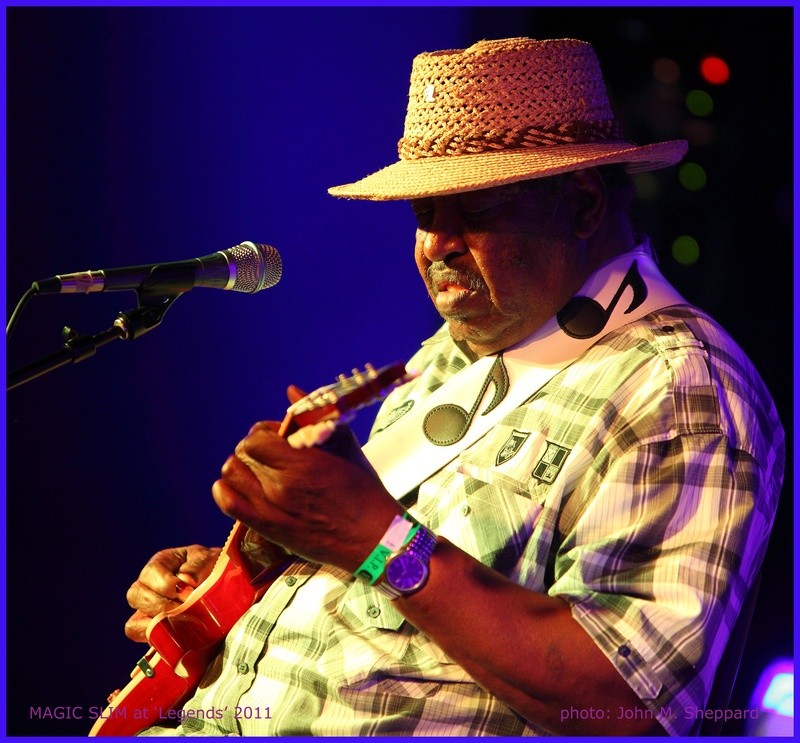 Veteran Chicago blues artist Magic Slim passed away on Thursday, February 21, 2013 after several months of illness. A consistent crowd pleaser, Magic played with a raw-boned intensity not often found in artists his age and reflective of such seminal Chicago blues giants as Howlin’ Wolf. He was able to capture that rough tone in scores of albums working with producers including Dick Shurman and Poppa Chubby. Born 75 years ago in Torrence, Mississippi, Magic Slim a.k.a. Morris Holt first came to Chicago in the mid-’50s and played bass for West Side soul man Magic Sam whom he’d known in Mississippi.

“Sam was four years older than me,” Slim told me many years ago, “and when we went to church on Sunday morning I’d go up to his house or he’d come down to my house, and we’d set up under the shade tree and play them guitars. His momma and my momma always said, ‘The devil gonna getcha all for playing guitar on Sunday.’”

Slim filled in for Hound Dog Taylor at Florence’s on the South Side in 1972 and began a long relationship with Blind Pig Records in 1990. His latest release for them is Bad Boy produced by band leader Michael Blakemore and Jerry Del Giudice released in 2012. Bad Boy is another chapter in the life of a musician that Blind Pig Records promoted as having “the meanest vibrato in blues.” His manager Marty Salzman with tongue only partly in cheek, says the guy knew 9000 songs.

Slim told me late last year that all the songs on the CD had been road tested. “Someone Else Steppin’ In” may be by Denise LaSalle and is a staple of Buddy Guy’s repertoire, but Slim claims he first heard it by Wilson Pickett. The title track is by Eddie Taylor, “that guy from the West Side.” There are three originals, “Sunrise Blues,” “Gambling Blues” and “Country Joyride.”

“When I’m sitting down like I am now, even in the hotel, I think of a couple words. I write ’em down, and then I go back and make them words rhyme. That’s how I do my songs.”

Magic Slim was industrial strength Chicago blues boogie with authentic Mississippi underpinnings. He played hard, he played mean, and his sound was so solid, right, and straight ahead, you don’t need a resume to know this guy came from the Mississippi mud.

Salzman admits they tried to get Slim to throw in some creative curve balls on some of his records. When I asked Slim himself about it, he answered with a comment that was not related to the question but puts any further questions down. “Magic Sam, we went to school together. See, I was slim and tall, and he’s the one that give me that name, and he told me to keep that name, and that name one day was gonna make me famous. So, at the time I’d kept Magic Slim, so, hey, I’ve had it ever since.”

Slim first gained attention outside of Chicago in 1989 when he toured Brazil with Buddy Guy. “It was Buddy Guy, Etta James, Jr. Wells and Albert Collins, all those and myself, all up on the show. I just had four pieces, guitar, bass and drums and myself.” When Marty Salzman walked into Slim’s dressing room for that show he told him that even though he wasn’t as famous as the others on the bill, no one in Brazil knew that. When he walked out on stage, all six foot, six inches with another six inches of cowboy hat, he got their attention, and it was Slim out of the five who got invited back several months later and for decades after that.

He’d been with Marty and Blind Pig ever since Brazil. “I can’t read and write that good, and I ain’t no dummy. I know when somebody doin’ right and when somebody ain’t doin’ right at all. Blind Pig and Marty Salzman they doin’ better than I think some other guys would do it. So, hey, man, I ain’t got no problem with ’em so I don’t see no sense of changing, booking and the record label and stuff like that. I don’t see no sense in that.”

Slim was missing his right pinky finger lost in a cotton gin accident when he was young. “There was a piece of wire in the cotton, and it was going up to the saw. I would then dry cotton. One spark would set it off. The saw went so fast. I see-ed the wire, but I tried to grab, but when I tried to grab it, it snatched my hand up in there. Lucky I didn’t lose my whole hand, but I was fast enough and quick enough to turn that wire loose.”

Magic Slim appears in an independent film Queen City produced by Buffalo native Peter McGennis and was first shown on the Legendary Rhythm ’n Blues Cruise in October of last year. Slim also appeared at the film’s official premiere in Buffalo in December. In the film Slim appears with such other high profile artists as Susan Tedeschi, Maria Mudlaur, Allen Tousaint, Sharon Jones, and Tony Lynn Washington. Slim plays the father of a policeman, a Buffalo cop, and he is basically squatting at the Hotel Lafayette which McGennis calls “something of equal majesty to Magic. There’s a synergy of magic when you put someone like Magic Slim in the Hotel.”

McGennis says, “Slim was such a pleasure to work with and his film cameo and music contribution “Rustbelt Woman” were fantastic. Slim typifies the living history and enduring spirit that Queen City pays respect to on screen.

“He got off the plane and wanted some spaghetti and meatballs. It was Sunday afternoon so we went to the only cop joint that was open, and we broke the bread literally, and then we got him in the studio. It took a little re-arranging to wrap around his playing, and that went well. Then the next day he played. We got him into this old hotel on a mattress with this old Victrola in the back, an old gun on a chair and him playing guitar, and he really just had to be Slim. That’s all we were looking for.”

“Although he’s playing a character in the film, he’s playing Slim, and it was great. It was a very touching scene because he’s playing a disconnected dad who’s kind of lost touch and disappeared. He did not make his son’s funeral, and I go to give something of value, of sentiment, to him and it’s a touching scene. He’s just kind of playing this walking blues track which is how I can hear him echoing down the halls of the hotel.”

“I kind of just follow the music, and I find him squatting up in this balcony. Then we’ve got (Michael) Blakemore (Magic Slim’s record producer) to play harmonica, and that was great. He closes the film in this Marquis ballroom that’s peeling plaster, falling apart, and there’s this little bit of a dance where these squatters are being entertained by him up on stage, and it sends kind of an enduring spirit message.”

Salzman recalls a recent opening set for Johnny Winter where Slim became to sick to go on, and his son Shawn fronted the band as a trio. The promoter was pleased enough with the set to pay the full contracted price even though Slim never set foot on stage. According to Salzman there’s talk of the band continuing as Shawn Holt and The Teradrops.

In announcing Slim’s pass Salzman said, “It is with great sorrow that I inform you that Magi
c Slim, a.k.a. Morris Holt of Grenada Mississippi passed away last night. He will be missed by his family, friends and blues fans all over the world. Funeral arrangements and a memorial service will be announced later this week. The family wishes to thank everyone for their kind words and prayers.”

Jerry Del Giudice from Blind Pig: “This is certainly a sad day. Magic Slim and I became good friends over a 24-year period. We made nine albums, one compilation and a DVD together, and when he passed away he was playing at the top of his game. Slim and the men and women who played true blues were the reason for Blind Pig Records existence. It’s as if a part of me died with him. May he rest in peace and may his music endure until the end of time.”

Peter McGennis: “My thoughts and prayers go out to Magic Slim’s family. He was such a character and a lovable mountain of man. As Queen City seeks distribution on the film festival circuit starting in April at Boston International Film Festival, I’ll be sure to pay highest respects to Magic Slim and to his wonderful legacy of music and inspiration.”