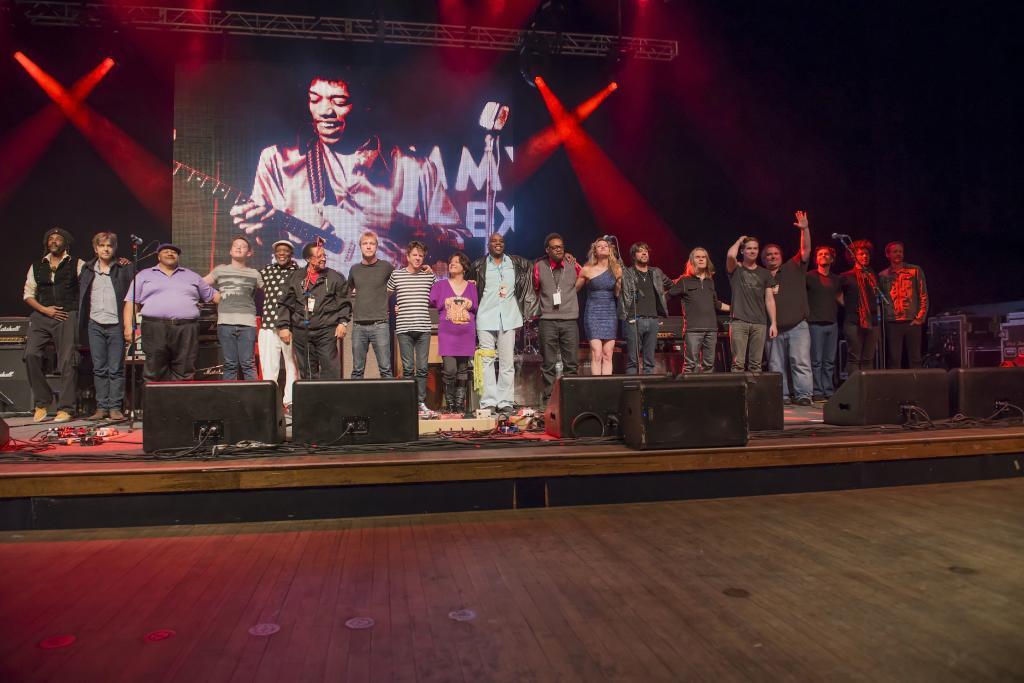 His eyes opened wide, his jaw dropped, and he made a gesture with his right toward the side of his head as if something alien had just taken over his mind. He was the three-year-old who made national news with videos showing him hearing for the first time. That’s how I felt when I first heard Jimi Hendrix in 1967. He wasn’t a black man playing electric guitar. He was a visitor from some galaxy far, far away who’d come to transport us into space. Saucers? We didn’t even need them. Just close your eyes and you’re gone.

Jimi was that out of context. At the Experience Hendrix Tour in Albany, New York, they played Elmore James slide guitar during the break, and Buddy Guy justified playing Muddy Waters’ “Hoochie Coochie Man” by lamenting on Hendrix telling him that Muddy inspired him to write “Voodoo Chile.” Jimi’s blues touchstones, though, seem more incidental than profound. It’s almost as though his sound materialized from the ethers like the voices in that three-year-old’s head.

I’ve heard hundreds, maybe thousands, of youngsters cover the Hendrix classics, and it all sounds like a summer breeze reduced to cement. Even seeing Hendrix live in 1968 somehow was more confining than releasing. But that was the same with the early Stones, Led Zeppelin and The Doors. The huge stacks on either side of the stage could not pump out the purity of these rock Gods’ magic to an auditorium that held more than 3000 people. People say to me today, “God, I wish I could have been there in the ’60s to see Hendrix live,” but note for note, the Experience Hendrix show is a better aural and visual experience.

Of course, you don’t have the transcendence that comes from knowing you’re in the middle of a profoundly historical musical experience that is changing the culture forever. But the sound on this year’s Experience Hendrix tour is exquisite. The big screen video shows Jimi materializing out of diamond-like stars in a velvet sky and makes the colored water amoeba light shows of the 60s seem like a horse and carriage from – well – a different century.

Guitarists Dweezil Zappa, Eric Johnson, Doyle Bramhall, Ana Popovic, and Eric Gales each bring to the party subtle influences from nearly a half century of post-Jimi musical evolution that frees Jimi’s music from the sealed in cement copies of Sunday night blues jammers. Dweezil has the studied and complex perfection of dad Frank. Doyle, too, takes his dad’s mastery of hard rock to new levels, and Ana earned the first standing ovation of the night in Albany with slide guitar work that demands that the gentlemen look beyond viewing her as just a beautiful blond in a little black dress. Johnson has a John McLaughlin fusion feel.

Frankly, the more straight ahead blues guitarists are Experience Hendrix’s weakest elements. Jonny Lang and Kenny Wayne Shepherd get the longest segments and dominate the second set of the three-hour-plus extravaganza. Plus, they get the crowd pleasing Hendrix hits like “Gypsy Eyes” and Let The Good Times Roll” for Kenny and an interminable version of “Voodoo Chile’ by Kenny Wayne Shepherd who still acts like a 15-year-old flashing and burning with the guitar behind his neck at the county fair. They don’t fly, they thrash.

Buddy Guy is the only guitarist who comes close to capturing the fluid excellence of Jimi’s spectacular feedback techniques, but that’s to be expected since Hendrix learned them from Buddy. How ironic that Buddy gets to walk through “Hey Joe,” “Red House” and “Them Changes” 43 years after the death of an artist who was inspired by his (Buddy’s) then novel use of string bending.