The Language of the Blues: GREENS 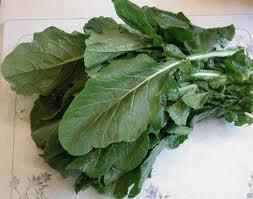 This is the latest installment of our weekly series, The Language of the Blues, in which author/rocker Debra Devi explores the meaning of a word or phrase found in the blues. To learn lots more about what your favorite blues songs really mean, grab a signed copy of Devi’s award-winning book The Language of the Blues: From Alcorub to ZuZu (Foreword by Dr. John) at Bluescentric.com. “One of the wittiest, bawdiest, most fascinating dictionaries ever.” (Reuters)

Greens are the tough-yet-nutritious leaves of collards, kale, mustard, or turnip. They are a popular soul food dish–cooked with pork fat (and sometimes ham hocks) until tender enough to eat.

Greens were often served in the black-owned nightclubs of the chitlin circuit, where countless blues musicians paid their dues playing one-night stands for a little pay and a hot meal.

Though delicious when cooked properly, greens are sometimes looked down upon as symbols of poverty. In “Black Gypsy Blues,” Furry Lewis gets the message that his woman is onto him for fooling around with someone else when:

Lewis is expressing the fact that his woman’s passion for him has cooled when she brings him some lowly turnip greens instead of some nice sweet cabbage. He may also be subtly referencing the use in the blues of cabbage as slang for a woman’s genitalia.