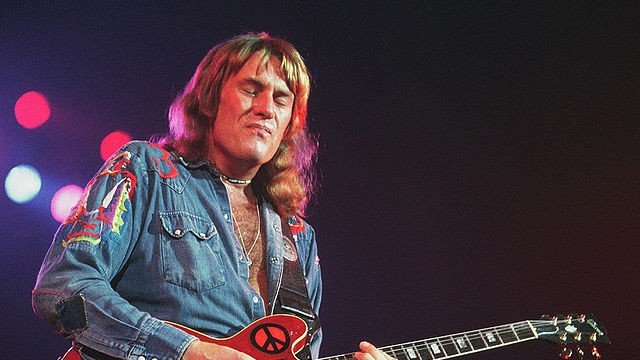 Who could ever forget the riveting performance at Woodstock 45 years ago when Ten Years After front man and lead guitarist Alvin Lee introduced the song “I’m Going Home.” Alvin electrified the stage with his ominous stage presence, singing, and lightning fast guitar licks. The historic performance by this British blues-rock guitarist would catapult him and the band into the spotlight that would span over 40 years until Alvin Lee passed away unexpectedly two years ago on March 6, 2013.

Ten Years After would be best known for rock driven songs like “I’m Going Home” and “I’d Love to Change the World”. However, the band was more then just a rock and roll sensation. After Woodstock, British blues and blues-rock bands invaded the U.S. with great success. Following Ten Years After’s instant success on the rock scene, they stayed true to their blues roots. The blues were important for the whole band as Ric Lee (Drums) of Ten Years After told us during a recent American Blues Scene interview.

“Both he (Alvin Lee) and I were into swing stuff and that, to a degree, was why there was always a swing track on most of our albums. I also loved his Bill Broonzy type acoustic song ‘Don’t Want You Woman’ which we played one time at the Marquee Club, London. Alvin played acoustic guitar and sang, Leo Lyons played an upright string bass, Chick Churchill an acoustic piano and me just a snare drum with brushes.” It was this love for blues that kept Alvin Lee active over a 40-year period putting out over 30 studio and live albums.

Two years after Alvin Lee’s passing, Ten Years After is again touring in support of a new album. “As Chick said in his sleeve notes for our new ‘live’ album, The Name Remains The Same, we really felt the need to keep the music of Ten Years After alive and continue Alvin’s legacy. Chick and I still love playing and getting the tremendous buzz and feedback from fans both old and new,” said Ric Lee.

The new line up consists of Marcus Bonfanti (Guitar & Vocals), Colin Hodgkinson (Bass), and founding members Chick Churchill (Keyboards), and Ric Lee (Drums). During the February 2015 gig on the Rock Legends Cruise III, Ten Years After performances were received with an enormous amount of enthusiasm and excitement.

Part of the excitement in the live shows can be directly attributed to the lead vocals and guitar of Marcus Bonfanti. From the moment he steps on the stage, he owns the crowd. As Ric Lee said, “Marcus is a master showman, as was Alvin. Like Alvin did, Marcus lives his music both onstage and off. When I first saw Marcus at a show in Lichfield, England, I was amazed how, when he walked onstage, he had a tremendous presence, which was similar to Alvin’s.”

Indeed, Marcus Bonfanti is already widely known and respected in the British blues community. He brings new energy to Ten Years After but still respects his position carrying the torch for Alvin Lee.

ABS asked Marcus Bonfanti what influence Alvin Lee had on him.

“I always loved the way Alvin played the guitar like he really meant it. I only had live records and visual footage that I could find on the Internet to experience this. I’m sure that in the flesh it was even more electric. Not only is he a great guitar player but the showmanship he added to the performances was great.”

During the Rock Legends Cruise III Ten Years After performance, Marcus Bonfanti’s long black hair bounced around as he comfortably bolted out one guitar lick after another. He looked and played the part of a well-seasoned rock star.

He continued on to tell ABS, “I want to bring the same approach to the band as Alvin did even though I am a very different guitar player to him (he was unique). It’s great rock and roll music and needs to be played with everything you’ve got, otherwise it’s not real and the audience always knows when it’s not real. It’s a real honor to be involved in such a legendary band and the energy I put in to each performance is based out of pure enjoyment.” After the Rock Legends Cruise’s last performance, Ric Lee took to the microphone and introduced the band. When he introduced Bonfanti, the crowd went wild, and he said, “I can see you’ve warmed to Marcus!”

Ten Years After is already touring Europe through 2015. Ric Lee tells ABS, “After the terrific reception we received on the Rock Legends Cruise III recently and requests from a lot of the audiences there, we’re working on putting an American tour together for later this year. “ Until U.S. tour dates are announced, listeners can purchase their live album The Name Remains The Same. The album was recorded in November 2014 at Z7 in Pratteln, Switzerland. Ten Years After is also writing and rehearsing for a new studio album for release later this year.

On this sobering anniversary of Alvin Lee’s loss, it’s reassuring to know his band mates are still keeping the memory alive. Although some of the members have changed for Ten Years After, the memory of Alvin Lee will continue because “the name remains the same.”