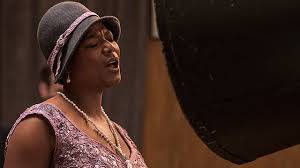 The first trailer of Queen Latifah playing Bessie Smith has just been released, and the short scenes show the actress & Grammy Award-winning singer searing as the “Empress of the Blues”. The movie, called Bessie, will be aired on HBO on Saturday, May 16th.

The film follows Smith’s journey to become one of the top entertainers of her era, and her struggles as a bisexual woman in a tumultuous marriage. Michael Kenneth Williams plays her famously estranged husband, Jack Gee. Williams was famed for his role as Omar in The Wire, a show that almost methodically is listed on every self-respecting “best TV shows in history” list. He most recently played Chalky White in Boardwalk Empire, a period piece almost perfectly overlapping with the Bessie Smith era, even playing Smith’s music in a number of the episodes.

While still a teenager, Bessie began singing professionally in a minstrel show in the early 20th century with then-unknown Ma Rainey. Her popularity as a singer soared and after she signed with Columbia Records in 1923, she became the highest paid African-American of the era, even riding in her own train car.

She appeared singing on film in 1929’s St. Louis Blues, and sang duets with Louis Armstrong that continue to be critically acclaimed. Tragically, Smith died at 43 years old in Clarksdale, Mississippi after a car accident on Highway 61.

In 1994, Smith was honored with a U.S. postage stamp, and in 1989, was posthumously given a Grammy Lifetime Achievement Award. She was inducted into the Blues Hall of Fame in 1980.

For blues fans wanting to see the film, HBO released the long-awaited HBO NOW this week, allowing anyone to subscribe to the premium network independently — without a cable subscription or bundle, for about $13 a month. For the next three months, the offer will exclusively be available on Apple iOS and Apple TV devices, and will be widely available after.