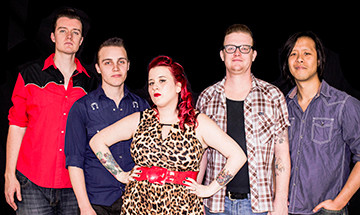 Had a really rough day?  Want to just relax, reboot, and get happy? If so, then the new 24th Street Wailers album, Where Evil Grows, is just the ticket. The album is the much anticipated follow-up to last year’s well received Wicked, and it doesn’t disappoint.

Sometimes, when music is described as “vintage” so-and-so, there is a connotation of being staid, perhaps even stale. The 24th Street Wailers aren’t having any of that. Their animated offerings are always a good time, full of spunk and passion. This outing features 10 tracks written by drummer and vocalist Lindsay Beaver, plus three covers. Like their previous album, Where Evil Grows is produced and engineered by Billy Horton at his Fort Horton Studios in Wyldwood, Texas. As with all their albums, the mix and sound are excellent. The band is made up of Canadian and American members including new guitarist, St. Louis native Elliot Sowell, who fills the vacancy left by Emily Burgeess’ departure last year.

Beaver’s vocals, a delightfully robust cross between Brenda Lee and Etta James, are wonderfully strong, nuanced, and convincing. The band is tight, and they continue to draw us in with their joy and enthusiasm.

Standout tracks on Where Evil Grows include the rocker “Cursed,” and “Just Wait,” which features sweet tenor sax soloing by Jon Wong. Pianist Jessie Whiteley, and Wong, both lay down fine solo work on “All I Think of Is You,” and a simply killer version of “I Found A Love” definitely takes one back in time. Mike Archer’s bass work is spot on throughout, and the band really gels as a unit.

If you enjoy your “vintage,” or if you prefer, “retro” jump blues, with some kick instead of a lame imitation, this album is for you.

Would we recommend this to our friends? Definitely.