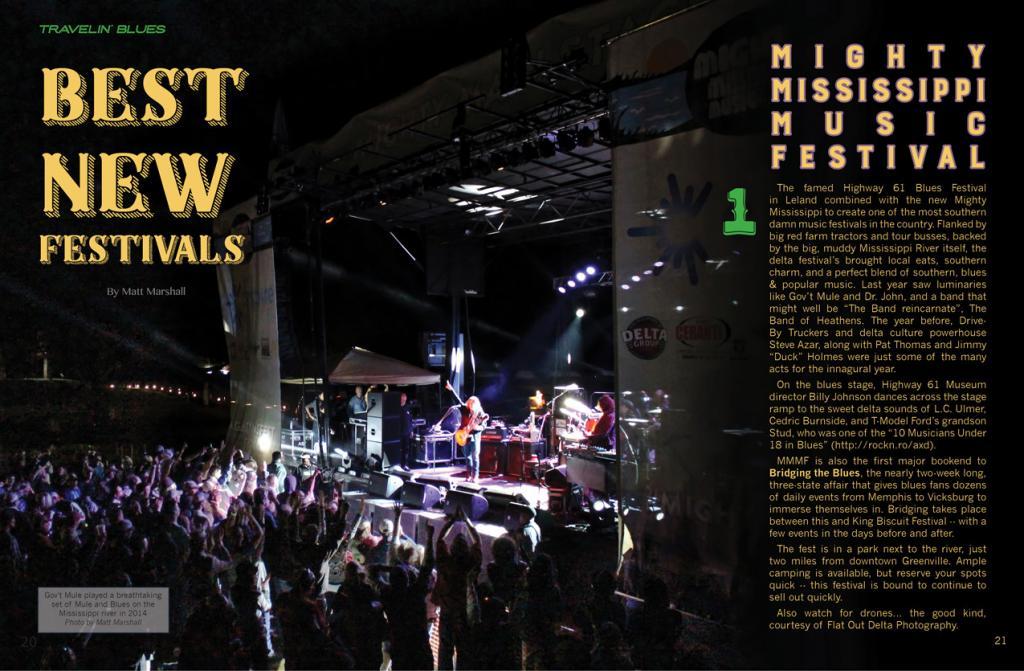 (GREENVILLE, MS) — Bridging the Blues, a tri-state effort to promote local musical culture, returns for its fourth year with over a hundred events in Memphis and the Delta regions of Mississippi and Arkansas between Friday, September 25 and Sunday, October 11. Signature events are the Mighty Mississippi Music Festival (Oct. 2-4) in Greenville, the 30th anniversary of the King Biscuit Blues Festival (Oct. 7-10) in Helena, Arkansas, and the 2nd annual International Conference on the Blues (Oct. 5-6) in Cleveland, Mississippi. To see the full schedule,
visit www.bridgingtheblues.com.

On Monday and Tuesday October 5-6 Delta State University once again hosts the International Conference on the Blues, whose highlights include a workshop and performance with Dom Flemons, formerly of the Carolina Chocolate Drops (Oct. 5), and a storytelling session with Bobby Rush and James “Super Chikan” Johnson (Oct. 6). Other events include a keynote talk by folklorist Dr. William Ferris and the dedication of a Mississippi Blues Trail (MBT) marker (“Gospel and the Blues”) at the former church of Rev. C.L. Franklin, father of Aretha (Oct. 6). There are over fifty MBT markers in the Delta region, including several in both Memphis and Helena. Be sure to download the free MBT app, which features interactive maps.

On Wednesday Oct. 7 there’ll be a “Blues Tweetup” featuring 16-year-old blues phenom Christone “Kingfish” Ingram at the newly opened Gateway to the Blues Museum and Visitor Center in Tunica. Be sure to stop by the Delta Blues Museum in Clarksdale, the Highway 61 Blues Museum in Leland, the Stax Museum of American Soul Music and the new Blues Hall of Fame Museum at the Blues Foundation’s headquarters in Memphis, and the B.B. King Museum and Delta Interpretive Center in Indianola. The latter will host a free outdoor show with the Big Time Rhythm & Blues Band on October 2.

Helena’s King Biscuit Blues Festival is staged alongside the Mississippi River levee, and will celebrate its
30th anniversary with headliners including Bobby Rush (Oct. 8), Jimmie Vaughan and Tilt-a-Whirl with Lou Ann Barton (Oct. 9), and Taj Mahal (Oct. 10). Dozens of artists perform across its multiple stages, including those dedicated to gospel and children’s music, and on Oct. 9 is the associated 5th annual Call and Response Blues Symposium, featuring a panel of veteran juke joint owners. Helena’s Delta Cultural Center, which features music exhibits, is also presenting its own Front Porch Blues Bash (Oct. 9-10), and each weekday hosts live broadcasts of the historic King Biscuit Time radio broadcast, with 89-year-old host Sunshine Sonny Payne.

Nearby Clarksdale is always hopping during “the Biscuit,” and is the site of the Second Street Blues Party (Oct. 10-11), and the Cat Head Mini Blues Festival and the 15th annual Pinetop Perkins Homecoming at Hopson Plantation (both events on Oct. 11). Throughout BTB there’s live music seven nights a week in Clarksdale at venues including Ground Zero Blues Club, Red’s, and the New Roxy. The internationally syndicated and Memphis-based radio program Beale Street Caravan will return to document many BTB performances for later broadcast.

Bridging the Blues has attracted tens of thousands of visitors from across the nation and around the globe and was recently named an event to watch in ABA’s Top 100 Events in North America for 2015. The Mississippi Tourism Association named BTB as the 2013 Tourism Achievement Winner. Mighty Mississippi Music Festival was also named by Acoustic Guitar Magazine as the “Do Not Miss” Festival in Mississippi, a Visitsouth.com Top 8 Festival, #1 New Festival in America by American Blues Scene Magazine, and a “Southern Travel Treasure” by AAA.

Bridging the Blues is a non-profit partnership between Mississippi Delta Tourism Association, Arkansas Delta Byways, Arkansas Parks & Tourism, the Mississippi Development Authority Division of Tourism, and the Memphis Convention and Visitors Bureau. BTB does not book artists, but simply coordinates information from our many partners.