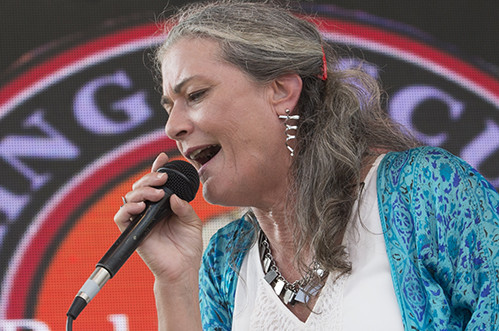 Reba Russell calls herself “a stepchild of the blues.” On “Blues Is Mine,” she sings, “I’m not privileged/I’m not rich/But I’m one hell of a blessed bitch.” A perennial favorite at the King Biscuit Blues Festival, she performs at the landmark festival Friday, October 9. The next day she’s my guest on the Fifth Annual Call and Response Blues Symposium, free to all, beginning noon at the Malco Theater on Cherry St. in downtown Helena, Arkansas.

Reba expresses her love for the Biscuit in “Heaven Came to Helena.” The youngest of four children, she lost her father at age seven, moved to Memphis in her 20s and never looked back. “Memphis is blues, but King Biscuit is the freaking deal. This is it. It’s like are you kidding me?”

Reba is as raw as her back story, and talking to her is like peeling back the skin of an onion. The meatier it gets, the more you cry. She lost her dad when she was seven. “Within a week or two weeks of my daddy’s death, we were leaving this nice house and moving to Florida so my mama could be closer to her sister and lived in a little tiny, cheap, inexpensive house, and all the luxuries at that point were no more.

“I was 10 or 11 years old when Martin Luther King got assassinated, Bobby Kennedy got assassinated, it just seemed like there was no future. I took drugs the first time when I was 13 years old. We all lived close to Coco Beach. Everybody was doing drugs, so it wasn’t hard to get. I’m not straight now, but my old man is.”

In the early ’80s she moved to Memphis. “I got here and started hearing all this music and stuff. It completely changed my world. I mean it was in your face seeing white and black people playing together.”

She’s done background vocals for John Nemeth, Tracy Nelson, Huey Lewis & The News, Jimmy Thackery, and Jim Dickinson. That’s Reba on background vocals for U2 and B. B. King on “When Love Comes to Town” on Rattle & Hum recorded in 1990 at Sun Studios. “Talk about a ghetto setup, they were so obviously hungry and embracing the whole Memphis and Sun Studio history, vibe, and mojo. That session was as chitlin circuit as it gets. I mean we set everybody up in that little tiny studio floor live, no headphones, sweatin’ like pigs in that place cutting those songs. It was an amazing experience, and believe me, I’ve done a lot of studio work in Memphis and some old school stuff, but never like that, and that experience was them completely embracing the whole Delta – and it was amazing to me ’cause they were not fancy, you know what I mean?”

Rufus Thomas heard her in a cover band when she first started playing Beale St. “He was one of the people who was so encouraging to me and telling me, ‘Ya got it! You use it! Do it!’ She took his message to heart and in 1992 fired everyone out of her rock cover band after they were voted best band in Memphis and went in a different direction. As if it has to be said, she adds a footnote, “I don’t really run in the mainstream circle.” Her other Memphis influences include Memphis’ own Jimi Jamison, Joyce Cobb, and Rick Christian.

In 2006 BluesWax suggested that Reba may be “the best contemporary vocalist out of Memphis.” Blues Revue Editor Art Tipaldi nailed it when he said, “Reba Russell has polished her powerful voice with a maturity that relies as much on brawn as it does on control, authority, and emotional nuances.”

It has been a constant struggle. KFFA’s King Biscuit Time host Sunshine Sonny Payne told her in no uncertain terms the first few times they met that she was a great singer, but that she needed management and better songs. “God all mighty, you got to do something, girl, ’cause I can’t play this.”

She makes her 20th annual appearance at this years’ Biscuit with eight CDs under her belt including originals and covers by artists like Willie Dixon, Memphis Minnie, and Tracy Nelson. She’s earned three Premiere Vocalist Awards from the Memphis chapter of the National Recording Arts and Sciences, and her eighth CD 8 was recorded at Jim Dickinson’s Zebra Ranch studio and mixed at Ardent Studios in Memphis for BEB Productions standing for Blue-eyed Bitches Production.

“I’m not up there to look pretty and sing pretty and all that. I’m up there to let it out. That is what encouraged the black people that I met who took me under their wings to like me because I wasn’t fake. I was really trying to be blues. I was trying to have soul regardless of what kind of music I was doing.

“It’s all about how do you feel watching me sing, not how do I look, but yeah, I think I totally got that from being here. I mean I don’t think if I hadn’t moved here I probably would be a singer at all. And being here made me realize that there’s a lot more to this music stuff than I ever expected, and everybody that plays here can kick ass. So it was like, ‘Yeah, I’m doing this come hell or high water. I don’t care,’ but until I kinda gave myself over to that, Delta roots music was what was moving me. I was just peddling till then. I didn’t realize that was what I was doing, but I decided ok, I’m gonna take it upon myself to make a record and do what I want to do, write my own stuff.

“I totally think there is something that rises up from that river and that dirt there. I think that the ancestry, the ghost, everything remains there. It remains there. There is no getting rid of it. I don’t care if anybody ever played another note of music there ever, that whole part of the country is just filled with the spirit of pain quite honestly.

“I haven’t done nearly as many festivals as the top blues artists, but I’ve done a lot and nothing has ever made me feel like that place makes me feel, nowhere that I’ve ever gone.”