Jeff Healey's "The Best of the Stony Plain Years" Is Exquisite 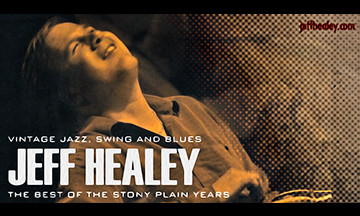 When Jeff Healey left this earthy plane in March 2008 at only 41 years old, his departure was deeply felt not only in his native Canada and the United States, but around the world. Healey was loved by his fans and respected by his peers. He was not one to be put off by difficulties, and throughout his life he strove to overcome any obstacle in his path. Even being blind since childhood did not stop him from his love for, and love of making music.

Most of Healey’s fans know him for his brilliant rock and blues guitar work on albums such as See the Light and Hell to Pay, along with his performance in the 1989 film Roadhouse. Still, many are none the less surprised to learn that his first love was jazz. Having hosted a radio show that showcased blues and jazz, he became known for the music he played from his own impressive and extensive 78rpm collection.

After having success with The Jeff Healey Band, in 2000, Healey began to focus his attention and efforts on his true love, jazz. He would record Adventures In Jazzland, Among Friends, and It’s Tight Like That as Jeff Healey and the Jazz Wizards. Another jazz album, Last Call was released posthumously in 2010. On these albums Healey played trumpet as well as acoustic and electric guitar.

Jeff Healey – The Best of the Stony Plain Years brings together tracks from these various albums as well as a promo only release with Chris Barber. This is a well rounded collection, with excellent sound quality and mixing. Production is minimal and effective. The best part of listening to these performances is hearing and sharing in the joy Healey finds in bringing this music to us. It is impossible not to be instantly cognizant of this.

This is just over 53 minutes of sunshine for the soul. The music here is delightful. We especially enjoyed the vocal on “Three Little Worlds,” and the horn and guitar work on “The Wild Cat.” Healey performs an airy rendition of “Star Dust” that features some exquisite guitar lines. Then there is the dance hall excitement of “The Sheik of Araby,” and the swinging “Some of These Days,” again with winning guitar lines and trumpet as well.

For blues fans with an appreciation for swing and jazz in the early style, Jeff Healey – The Best of the Stony Plain Years is a chance to experience Healey enjoying himself as he brings this amazing music to them for their listening pleasure. Fans who are more familiar with his rock oriented blues will also no doubt find these performances enlightening and thrilling for their simplistic beauty.