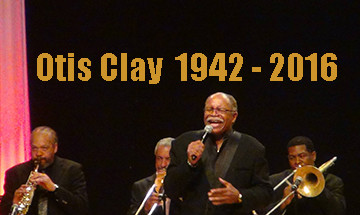 Earlier today Miki Mulvehill, owner of Clay’s management company, Heart & Soul Artist Management, expressed their sadness at the loss of their friend in a post on Clay’s Facebook page. “We are very sad to confirm that Otis died early Friday evening of a heart attack.Our hearts are broken, the world has lost an amazing musician, teacher, humanitarian and friend.” Clay was 73 years old.

Clay was born in Bolivar County, Mississippi, and as so many great artists before him, he eventually made his way up to Chicago. He initially released several gospel flavored records before moving more into an R&B and soul direction.

Over the years Clay built a huge following in Europe and Japan, as well as in the U.S. His 2007 release Walk A Mile in My Shoes earned a Grammy Award nomination for Best Traditional R&B Vocal Performance. He released Truth Is in 2013, and Soul Brothers with Johnny Rawls in 2014, both receiving critical and fan acclaim. In 2013, Clay was inducted into the Blues Hall of Fame.

Living on Chicago’s West Side, Clay was deeply involved with many community programs including the planning, fund raising, development, and nurturing of The Harold Washington Cultural Center. Clay worked tirelessly to give his fellows a hand-up, and to improve the lives of others however he could. He was ever mindful of the needs of others.

Otis Clay was an accomplished singer, performer, and a giving human being. He will be deeply missed by his fellow performers, his fans, and his neighbors.