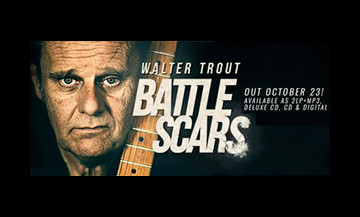 New York, NY — Walter Trout hits the highways of the U.S. this March for the long-anticipated tour to support his recent studio album Battle Scars.  The tour begins on March 10 in Las Vegas, and will run through June.  Alongside headline dates across the country, Trout will appear at the New Orleans Jazz & Heritage Festival, headline several festivals including the Tampa Bay Blues Festival and the Beale Street Music Fest in Memphis. Trout will also perform at the Grand Ole Opry in Nashville for Lead Belly Fest (which follows his recent show-stopping appearance at Carnegie Hall in New York).  He will then return to Europe for an extensive tour of prestigious festivals overseas.

With bristling energy, unflagging virtuosity and lyrics that cut to the core of human hope and willpower, Trout’s Battle Scars, chronicles his horrific battle with liver failure. The 12-song set, released worldwide by Mascot Label Group’s Provogue Records, captures the international guitar hero, on a new high — playing and singing at the peak of his abilities, infusing even his darkest numbers with creative joy that sweeps like a beacon.  “I’m thrilled about this album, about my life and about my music,” says Trout, who returned to the stage in June 2015 at the esteemed Lead Belly Festival at London’s Royal Albert Hall. “I feel that I’m reborn as a songwriter, a singer, a guitarist and a human being. I have a new chance at being the best musician and the best man that I can be. And I’m incredibly happy and grateful.”

Trout looks forward to playing the songs from his recent release for his US fans. Speaking from his home in Southern California, he relates: “The songs come out a little bit different each night, as I feed off inspiration from the audience. It is still a therapeutic experience for me to play these songs about my journey to death’s door and back, and each time I share them with a live audience, I heal a little bit more.”

Battle Scars is Trout’s 18th album released by the Netherlands-based Provogue label and his 42nd overall, counting his pre-solo-career recordings as a member of the historic groups: Canned Heat and John Mayall’s Bluesbreakers. Trout’s practical schooling started in earnest when he arrived in Los Angeles in 1973 and got gigs backing Hooker, Big Mama Thornton, Finis Tasby, Pee Wee Crayton, Lowell Fulsom, Percy Mayfield and Joe Tex. In 1981 he joined the remaining original members of Canned Heat. But the real turning point was his five-year tenure with British blues giant Mayall. Trout became part of the Bluesbreakers’ lineage of great guitarists along with Eric Clapton, Peter Green and Mick Taylor.

Trout founded his own band in 1989 and cut his debut album Life In the Jungle, rapidly becoming a chart-topping star in Europe. His first U.S. release, 1998’s critically heralded Walter Trout, also made him a fixture of the American blues-rock scene.

Over the decades Trout has accumulated numerous honors. He is a three-time winner of the “Overseas Artist of the Year” title at the British Blues Awards, and is a three-time Blues Music Awards nominee (US). In 2015, Trout won the Sena European Guitar Award, and honor he shares with a handful of acclaimed previous winners such as Brian May, Steve Lukather, and Slash. Trout’s six-string prowess earned the number six slot in BBC Radio 1’s “Top 20 Guitarist” listener’s poll.

Trout is now moving triumphantly forward in his 50th year as a guitarist. He is joined on the road by keyboardist Sammy Avila, drummer Michael Leasure, and bassist Johnny Griparic, with a special appearance by son Jon Trout.  “I don’t take this lightly,” Trout declares. “My wife, Marie says that all of the people who donated to our fundraiser for my medical expenses” — which generated more than $240,000 – “bought stock in me and my liver. When I play for them now, I have a responsibility to give back and offer the very best that I have.”