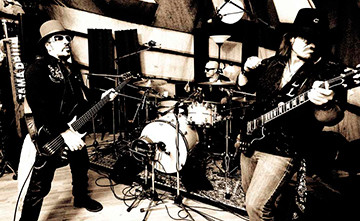 How many of us have marveled at the deep, rich, spacial, balls-to-the-wall intensity of bands like say, Nazareth? What about the harmonic, often jazzy and sometimes almost funky seduction of the Allman Brothers? Ever wonder what would happen if someone brought all that together into a single band? Well the wait is over; Supersonic Blues Machine has arrived.

A trio born out of a desire for bassist/producer Fabrizio Grossi to return to his roots, he has connected with veteran drummer Kenny Aronoff, and guitarist/vocalist Lance Lopez. Grossi has said “The blues is what makes me tick. It is the main ingredient of any successful music recipe.” He calls it “a blast from the past, aimed at the future.”

West of Flushing South of Frisco, SBM’s debut album, nods to the blues while firmly diving into the future. Issued by Provogue, of the Mascot Label Group, the 13 tracks run about 56 minutes. Along with Grossi, Aronoff, and Lopez, we are treated to guest appearances by Billy Gibbons, Chris Duarte, Walter Trout, Eric Gales, Warren Haynes, and Robben Ford.

We really enjoyed the entire album, which has this trio’s talents on grand display. There were tracks that we especially enjoyed though. “Running Whiskey,” featuring Billy Gibbons, is a great car top down song, and we easily see ourselves burying our foot in the gas as we turn this up to 11. “Remedy,” featuring Warren Haynes, is a beautiful tapestry of sound with a glorious southern flavor about it. Chris Duarte plays on “That’s My Way,” with it’s gritty, just this side of funky backing behind sweet guitar and bass lines.

We wallowed in the Michael Price/Dan Walsh hit first performed by Bobby Blue Bland, “Ain’t No Love [In The Heart of the City].” The performance here is an edgy, tight, piercing take on this classic.

Eric Gales is right in the pocket as he joins the fellas on “Nightmares and Dreams,” with everyone delivering pointed lines and beautiful fills throughout. The band was absolutely elated to have Walter Trout healthy and joining them on “Can’t Take It No More.” ABS premiered the video for this amazing track earlier this month. This track slowly builds, and then explodes into bursts of intense lead guitar goodness.

“Let’s Call It A Day” features Robben Ford, and his lines are so sweet here; always the right note in the right place. He and Lopez trade licks that really let each other shine. Beautiful piece all the way around. The album closes with “Watchagonnado,” a killer groove. This is what WAR would have sounded like if they had been more rock than soul.

West of Flushing South of Frisco is a keeper. This is definitely one to check out soon. Turn the sound up, and jump in with both feet. It’s everything blues rock should be. Drops on February 26th. Don’t miss out!