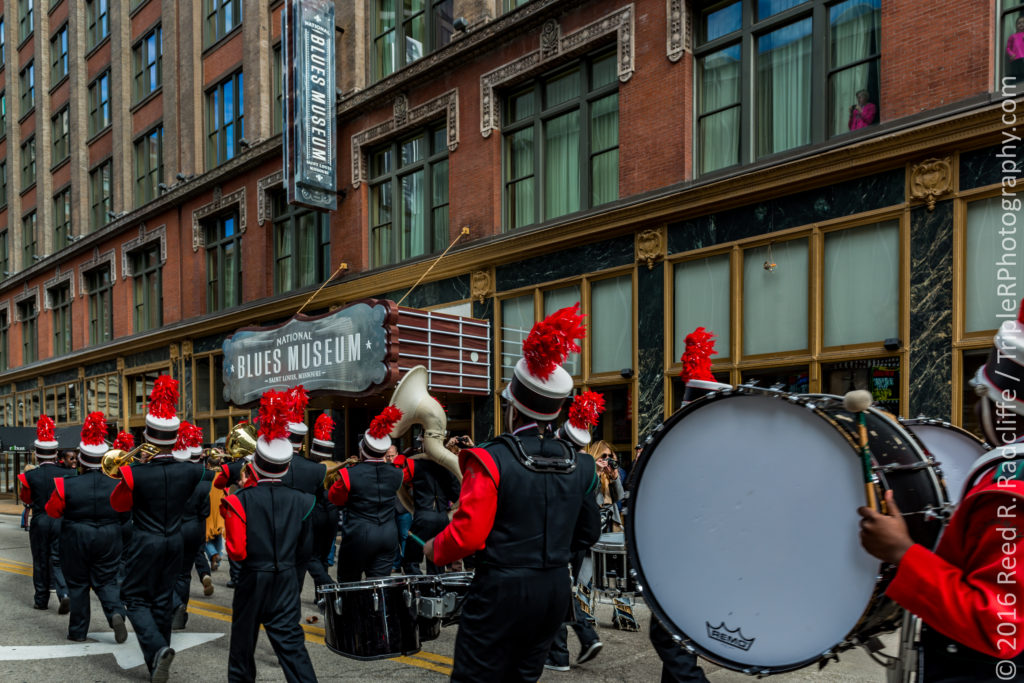 Police had blocked off the streets, smiling and clapping with the school marching band parade from the formerly embattled St. Louis suburb of Ferguson, Missouri. The excellent band even played some blues standards on marching brass and percussion. The air was electric with excitement.

“I hope that on opening morning, there will be a line of people all the way around this block,” said National Blues Museum Interpretation Coordinator Dave Beardsley two days earlier. His hope was more than affirmed as crowds flocked to the Museum that spring Saturday. The line to enter snaked around the city block. Several days after the opening, Mr. Beardsley became the first person to be married inside the National Blues Museum.

But this is not the kind of long overdue ticker tape parade, red carpet reception that the blues has become accustomed to. A genre that has far-and-away continued to be the most influential to American music, has also paradoxically not always been widely popular or recognized until relatively recently.

While since at least the 1960’s, nobody has denied its continued influence — the music even experienced several vast revivals in 60s folk, late 80s blues, et al. — but with some exceptions, efforts at celebrating and preserving the giant cultural achievement that is the Blues have often been grass roots. In some cases, the legacies of the men who made the music, and the music itself, were already slipping away largely unacknowledged into time.

While focus is beginning to become more clear that the blues is seeing a national renaissance (though not by any means its first), the city of Saint Louis has proudly created a timely, state-of-the-art permanent downtown attraction that helps honor and preserve not just the history, but also the future of the blues music genre.

What does the National Blues Museum Feature?

The museum begins chronologically, with field hollers, slaves and sharecroppers harmonizing as they worked, and branches into the roaring twenties and through musical hotspots like Chicago, Memphis and the Mississippi Delta. It works its way into the many acts like Jimi and The Allman Brothers, who explored new music with the blues as their guide.

Visitors flocked to one of the National Blues Museum’s coolest attractions: a fully functional studio where you can record your own blues album, instruments, lyrics, vocals and all! Don’t worry, it’s an exciting and unique activity that anyone can do; there’s even instruments that anyone can play! Towards the end, in a control room that Jack White was instrumental in creating, you can mix your own songs, pick album art and even share your new music on social media or email it to yourself for free.

There’s a large, inviting gift shop which promises to continue to be filled with great new music merchandise, all going to support the persistent success of blues music.

A unique, charming stage faces the busy city street windows. Even on its first day, passers-by gazed through into venue with wonder and imagination as they watched a bluesman create soul from his guitar. That day, the bluesman was the wildly talented young Marquise Knox. The museum hopes to host music “as often as possible,” says Executive Director Dion Brown.

Saint Louis opens the museum during what is a sort of “banner” time for Blues Music. Buddy Guy was recently honored with a Kennedy Center Award not long after getting President Obama to sing “Sweet Home Chicago”, as PBS and In Performance at the White House created a special star-studded event honoring the blues.

Just five hours by car from the National Blues Museum, The Blues Foundation just opened the permanent Blues Hall of Fame in Memphis, and the Delta Blues Museum just opened an entire Muddy Waters Wing. Younger, influential artists like Gary Clark Jr, Joe Bonamassa, Jack White, Leon Bridges, and many other contemporaries are gaining new national attention with their genre-spanning interpretations of the blues. Forbes Magazine acknowledged this changing tide of attention on the blues with the recent headline “blues is the new cool music… again”.

With a growing amount of attention focused on the genre, the city of Saint Louis and the many collaborators that made the museum possible could not have chosen a more fortuitous time to fully realize a permanent organization dedicated to preserving and continuing blues music.

Why Saint Louis and What Does it Have to Offer?

The National Blues Museum is in Downtown Saint Louis, which is right on the Mississippi River, upstream from New Orleans and Memphis. It’s also just down the road from Detroit and Chicago, by way of the famous “Blues Highway” Highway 61.

Saint Louis is where Chuck Berry lives, where Stagger Lee really murdered Billy Shelton, where Miles Davis learned jazz, and a whole mess of bluesmen like Big George Brock and Albert King cut their teeth. W.C. Handy made himself and “The Lou” famous almost 90 years ago with his smash hit song “Saint Louis Blues”. The town’s NHL Hockey Team still honors the city’s contribution to the music with it’s name: The Blues.

The Museum is just blocks from the MLB Cardinals‘ and NFL Blues‘ Stadiums, and there’s ample parking available nearby. The old river town boasts too many incredible and diverse established eating attractions to name. There is also a deep well of free and cost-effective attractions in Saint Louis, like the Saint Louis Zoo, the “have to see it to believe it” City Museum (a shoe-factory-turned-“playground” for all ages), and the Saint Louis Art Museum.

For music travelers, grab a sandwich from Vinnie at nearby Blues City Deli in historic Benton Park. Also check out two close longstanding blues bars, just minutes from the Museum: BB’s Jazz Blues and Soups and Broadway Oyster Bar have kept awesome touring blues flowing in town for over thirty years! Just past that is the Historic Soulard, home to lots of live music entertainment and the world’s third largest Mardi Gras after Brazil and New Orleans.

The beautifully revitalized Delmar Loop is a live music mecca that’s earning an international reputation as one of the greatest streets in America. The Loop is home to “Chuck Berry’s hangout”, the Blueberry Hill venue and restaurant, The Pageant venue, and the boutique Moonrise Hotel, among a host of other dining and entertainment options.

While on the loop, go to the famed longstanding Vintage Vinyl record store, take a sticker and some records home. Also prepare to be blown away by the famous minds, musicians, actors, businessmen and characters enshrined on the Saint Louis Walk of Fame sidewalks. Get a picture with the Chuck Berry Statue!

We were guests of Explore Saint Louis and The Four Seasons Hotel, who with the rest of the town, proudly worked hard to support the new National Blues Museum and warmly welcome their many blues visitors. The beautiful Four Diamond Four Seasons Hotel and Casino has unmatched service, entertainment, and amenities, and a majestic, Jeffersonian view of the world famous Saint Louis Arch over the Mississippi River.

St. Louis’ historic Laclede’s Landing, walking distance from both the hotel and the Museum, hosts the Big Muddy Blues Festival every Labor Day. The annual Saint Louis Bluesweek Festival holds down an entire week dedicated to the blues on Memorial Day.

For all the music that was cultivated and continues to come from Saint Louis, because it doesn’t have to, the National Blues Museum doesn’t shine the brightest spotlight on it’s own city. It rather stands as a central beacon to the the Blues Music that came from the delta fields, up and down the Mississippi river, and went on to change the world.

For everyone planning their National Blues Museum experience, there’s a deep wealth of attractions for any age, and no shortage of music entertainment experiences that could keep any party busy for days! Find music on any night in Saint Louis, and honor the blues in grand fashion with the National Blues Museum.