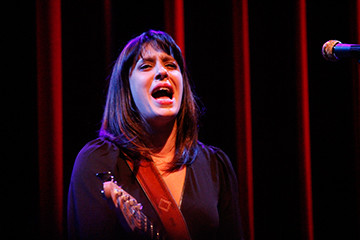 After fighting heavy Friday night traffic, I finally arrived to the Narrows Center in Fall River, Massachusetts to see The Danielle Nicole Band. Arriving, I lucked out, grabbing the last parking spot in the back of the old textile building. A perfect start to the evening!

This powerhouse band from Kansas City took the stage a little after eight o’clock to a warm welcome from the eager crowd of around two hundred. A force to be reckoned with, DNB features Danielle Nicole on lead vocals and bass, Mike “Shinetop” Sedovic on keys, Brandon Miller on guitar and Theremin, and holding down the beat on the drum kit, Jan Faircloth.

From the moment the Danielle Nicole and company took the stage, they owned the night, playing their hearts out for over three hours!  The band played three different sets, the first set consisting of favorites such as the slow drifting “Easin’ into the Night.” Many in the audience were taping their feet or swaying to the music in the aisles. This earned one of many standing ovations throughout the evening.

As if that wasn’t enough to get the crowd going, the band brought the flavor and feel of New Orleans to Fall River with a Professor Longhair style tune called “In My Dreams.” This song is one of many that singer songwriter Anders Osborne collaborated on with Danielle.  While there were no beads or Mardi Gras Indians, this song’s rhythm transformed the atmosphere of this old textile mill to walking down Bourbon Street in New Orleans!

“Wandering Heart” from the EP was another number that showcased the true power of Danielle Nicole’s voice.   There is no doubt that Schnebelen was channeling her inner Cab Calloway with a hard-hitting performance on “Wandering Heart.”  “Burning for You” is a gritty display of the talent that the band possesses. Jan Faircloth provided some hard hitting action on the skins, while Brandon Miller and Danielle Nicole accompanied each other nicely on guitar and bass respectively, and the talented Mike “Shinetop” Sedovic displayed his skills on the eighty eights.

Without pausing, the band dug deep into the Schnebelen archives playing a fan favorite from the Trampled Under Foot years, “Bad Bad Feeling.” This TUF number received a standing ovation, one of several during the evening. Wrapping up the first set of the evening, the band closed with “Wolf Den,” the title track to the album Wolf Den, released in 2015.  “Wolf Den” is a down and dirty tour de force showing that this band came to play.

After a short break, Danielle was back on stage for her short acoustic set. The 2014 Blues Music Award winner for Instrumentalist – Bass proved that she is equally talented in on the six string.  Schnebelen played three songs, leading off with an original number that is not often played, but a treat to the ears, “Devil with Baby Eyes.”  This was followed with a moving rendition of John Prine’s 1971 classic “Angel From Montgomery.”  Schnebelen closed out this mini-set with a tribute to country legend Dolly Parton, playing a spirited “Jolene.” Her solo mini-set concluded, she was greeted with thunderous applause from the audience!

The band’s second set featured more tunes off of the 2015 release Wolf Den, such as the heartbreaking “Take It All,” the story of a romance that once had promise, but has now soured. “You Only Need Me When You’re Down” from Wolf Den, was a number that had the fans on their feet swaying side to side, and clapping their hands!

Before the evening came to a close, the band played two encores! The first was a heartfelt tribute to the late Prince with a moving version of ‘Purple Rain.”  Led Zeppelin’s “Whole Lotta Love” closed out the night that saw guitarist Brandon Miller not only rocking the Gibson, owning the Theremin as well!  These two favorites brought down the house. If you have not seen the Danielle Nicole Band, add them to your list. Once you see them, you will become a member of their growing wolf pack of fans!