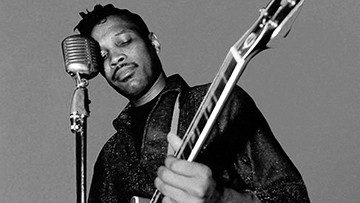 Editor’s Note: Usually this Throwback Thursday space looks back at an album previously issued, or an event that shaped the music world, or it takes a long view of an artist’s body of work and their contributions as a whole. This week, we will look at a recently issued deluxe edition of a Chicago blues classic. The original article appeared at ChicagoBlues.com this past April 21st. Thanks to them for allowing us to share this with our fans.

Originally released in 1969 and featuring the fruits of two studio sessions from late in 1968, Delmark’s Black Magic album by Magic Sam was a beautiful nexus of the musical universe. 1969 was a time of huge upheaval and change in the world, and in the world of music as well. The “Summer of Love” had long since ended two years before, taking any remaining innocence the sixties had left along with it. The folk movement had evolved and for the most part, had moved on, embracing acoustic rock. Soul had evolved from the Motown sounds of the inner city to a grittier form of soul that was beginning to convey the story of day to day life and the trials and tribulations of that same inner city as it was, not as we wished it was. Funk was morphing with blues and rock, and jazz was beginning to incorporate elements of funk and rock as well. Everything was in flux.

Shortly after Black Magic was released by Delmark, Samuel “Magic Sam” Gene Maghett was dead of a heart attack – at age 32! There were so many aspects of this album that made it the masterpiece that it is. First and foremost, it was recorded beautifully, and simply, without anything getting in the way of the music. Sam himself is relaxed and in fine form, without a care in the world because as he puts it, “I got nothing but expert musicians. I don’t have to worry about it.” Those musicians are Magic Sam – guitar, Eddie Shaw – tenor sax, Lafayette Leake – piano, Mighty Joe Young – guitar, Mac Thompson – bass, and Odie Payne Jr. on drums.

This record is such a fine example of how to mix a perfect soul stew, seasoned with a huge helping of heart, and blues. There are echoes of James Brown, the Staples Singers, Matt “Guitar” Murphy, Byther Smith, and even hints of Wilson Pickett. There’s West Side Soul with a dash of Memphis soul for just the perfect flavor. Of, course there is a truckload of great Chicago blues too!

So what makes this new, “Deluxe Edition” so deluxe? Well now, there’s the fact that all the music has remastered from analog tapes and sounds amazing! This edition includes several alternate takes and two previously unreleased tracks. There’s also a 16 page booklet with liner notes and some very cool photos too.

There are several standout tracks here including “I Just Want A Little Bit,” “It’s All Your Fault,” “Everything’s Gonna Be All Right,” and “Keep On Doin’ What You’re Doin'”. This is an excellent way to spend 68 minutes enjoying some of the finest blues that Chicago has ever produced. We highly recommend this album for any blues lover.