Vaughan Brothers to Be Honored with Artwork In Dallas 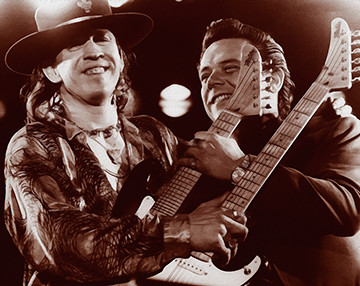 When Stevie Ray Vaughan died on the morning of August 27th, 1990, a piece of the blues world’s heart died with him. B.B. King, Eric Clapton, Buddy Guy, and many more lost a friend. Jimmie Vaughan lost his brother. For the rest of us, it was as though the air had been sucked out of the room; it just didn’t seem real.

It was real though. As time went on, the enormity of this loss became more and more apparent. Austin erected a bronze sculpture by Ralph Helmick honoring Stevie at the intersection of South Bank at South 1st and Riverside Drive. Dallas, where Stevie and Jimmie grew up in Oak Cliff, has not erected a statue, or any artwork honoring either of the Vaughan brothers.

That is fixin’ to change. There has been a movement afoot to install artwork in Dallas’ Oak Cliff neighborhood for a while now. It has been a long haul, and much has been accomplished to make this monument a reality. Funding had to be secured, a sight had to be selected and approved by the powers that be, and Jimmie Vaughan himself had to be brought on board.

On Wednesday, May 25th, in a 15-0 affirmation, the Dallas City Council voted to go ahead with installation of the Vaughan Brothers monument in Kiest park. The monument is expected to be completed and installed by the end of summer next year, a mere few streets down from where the brothers grew up on Glenfield Avenue in Oak Cliff. The artwork is designed by Spanish artist Casto Solano, and consists of four large, interconnected panels displaying an array of photographs of the two brothers, along with the lyrics to their hit song, “Tick Tock.” Solano will construct the artwork at his studio in his native Spain.

Two individuals instrumental in the effort to honor the Vaughan brothers in Dallas where they grew up are Kirby Warnock, and Kay Kallos, the public art program manager in the city’s Office of Cultural Affairs.  Warnock raised $68,000 through the Oak Cliff Foundation, and also got Jimmie Vaughan onboard with the project. The project is also funded through $47,200 in 2006 bond funds that were intened to use for public art in Kiest Park.

Meeting with Warock after the council had voted, Kallos told him that his efforts had “established a precedent for how community groups can work in partnership with the city for public art.” Warock has suggested that another favorite son of Dallas, guitarist Freddie King should be recognized next. Only time will tell.