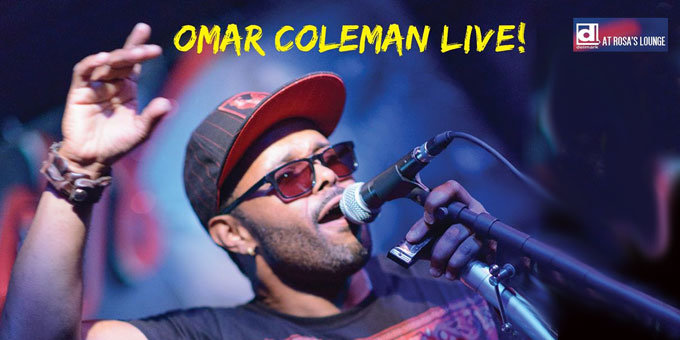 Singer, songwriter, and harp master, Omar Coleman, is Chicago. As his 2015 release on the Delmark label proudly proclaimed, he was Born and Raised on the city’s West Side. Growing up in that atmosphere exposed the young man to the blues, soul, and funk of the Windy City. He absorbed the harmonica music of masters, Junior Wells, Little Walter, and Sugar Blue. The funk and soul dripping vocals of Bobby Rush, Al Green and Syl Johnson inspired his own voice. The Sunday morning gospel sounds of Mighty Clouds of Joy galvanized his resolve. Now, he combines all those influences and brings us Live!

Recorded at Rosa’s Lounge, one of the premier blues clubs in Chi-Town, Coleman serves up a high energy set of respectful covers, and thrilling originals. The very first track sets the mood as the Junior Wells/Buddy Guy classic, “Snatch It Back And Hold It” segues flawlessly into Johnnie Taylor’s “Wall To Wall.” He pays homage to Willie Dixon with spot on covers of “I’m Ready,” and “Two Headed Woman,” and gets as funky as can be on Rufus Thomas’, “Give Me The Green Light.”

One of our favorite tracks is the original composition, “Slow Down Baby,” which, ironically, is a very up-tempo shuffle with a distinct New Orleans flavor. Coleman’s harmonica on this song comes across as accordion like, and the rolling piano of  Neal O’Hara backing Pete Galanis’ driving guitar surely left Rosa’s dance floor soaked.

Marty Binder is a solid drummer throughout, and the bass parts were handled by Dave Forte on the first five tracks, and Ari Seder on the last five. The album was recorded on three different nights in a span of nearly a month, which helps explain the use of two bassists. Speaking of recording, Live! is well engineered and recorded with the approving shouts and applause of the crowd only at the end of each track and not overpowering the performance.

Coleman is a relative newcomer to music as a profession. He didn’t begin playing harp until around the age of 25, with his first recorded performance just 11 years ago. Since then, he has, quite literally, toured the world, played dozens of major festivals and is a popular main stay at the finest clubs in his hometown. His voice tells us that he is an old soul, but his music mixes that old school feel with a very modern, refreshing take.

If you haven’t yet seen him play live, then this album is a must. Live! is all the power, emotion, and wit of his live performance captured on one killer CD.