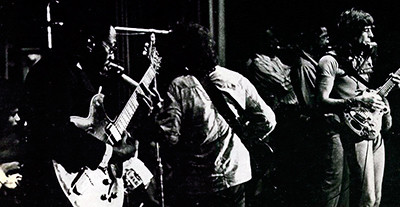 John Mayall has been making consistently brilliant music for over six decades now, a great legacy by any standard. Like other musicians of great stature, Mayall has been particularly blessed in being able to perform with some of the best and most endearing artists on the planet, including Eric Clapton, Peter Green, Jack Bruce, John McVie, Mick Fleetwood, Mick Taylor, Aynsley Dunbar, Walter Trout, Coco Montoya and Buddy Whittington. His albums are the fodder of blues legend, including the “Beano” album, Blues Breakers With Eric Clapton, Wake Up Call, and A Hard Road, just to name a few.

When the 82 year old Mayall issues an album, it is a celebration. There will be “ah-ha” moments, and “unbelievable” moments for listeners to bask in, and without doubt there are always moments of revelation. For the most part, this has always been so.

Recorded in November–December 1971, and released in 1971 on Polydor, Jazz Blues Fusion‘s seven tracks have an all too short running time of just this side of 45 minutes. All songs on the album are credited to Mayall, who has assembled a remarkable ensemble of musicians here. We have Mayall on vocals, piano, guitar, and harmonica, joined by Freddy Robinson on lead guitar, Larry Taylor caressing the bass, and Ron Selico keeping the beat on percussion. Also coloring the mood are Blue Mitchell blowing trumpet, and Clifford Solomon coaxing bliss from his alto & tenor saxophones.

Jazz Blues Fusion is a perfect example of what today’s so-called hipsters strive so hard to project and achieve: suave cool that is unforced, awakened from the depths of a carefree spirit and an unbound, buoyant heart. Listening to this music, one is immediately caught up in the joy and enthusiasm of the performances. These musicians are not working; their hearts are singing and dancing as their hands lovingly encourage the instruments to yield their beautiful fruit. These songs are a breath of fresh air; they are a simple and tantalizing truth, beckoning weary spirits to smile and be contented.

An album of pure delight, Jazz Blues Fusion is a gift that will be welcomed by any music lover. Share this album with a friend, lover, or even yourself. What a considerate gift it is!