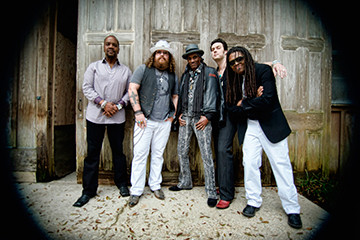 Royal Southern Brotherhood is back with their latest release, The Royal Gospel, and it’s the group’s grittiest sounding, adrenaline pumping album yet.  Twelve brand new tracks consisting of blues, blues rock, soul and funk to get your summer off and grooving on the right foot!

The band has gone through a few changes over the years, with guitarists Mike Zito leaving in October of 2014, replaced with Bart Walker, and Devon Allman leaving in April of 2015 with Tyrone Vaughan filling the vacancy.  The mix of founding members with the two new additions sees this band sounding better than ever!

Some of the tracks we liked from the new album are “Hooked On The Plastic” a funky number that features some groovy guitar riffs by Bart Walker and Tyrone Vaughan.  “Can’t Waste Time” blends a slow reggae feel with a type swagger that grabs the listeners ear.

“I’ve Seen Enough To Know” is a smooth, slow paced ballad with a hypnotic bass that captivates from the moment Yonrico Scott opens with a hard-hitting drum solo in the first several measures.  This song has a definite seventies vibe to it that transports us back to a time when platform shoes, eight track players and shag carpeting were all the rage.

We also enjoyed “Spirit Man,” and its gritty, in your face soulful feel had us laying back, diggin’ the groove.  Sporting a darker sound from the band, the talent of Norman Caesar on keys is a perfect compliment to guitarists Walker and Vaughan.

“I Wonder Why” is destined to become a hit with RSB fans for sure. It showcases the Hammond B3 as well as a pulsating percussive beat, making it irresistible. “Stand Up” is the most up-tempo song on the album, featuring lighting fast guitar riffs.  The song’s gospel feel had us wanting to go to church and sing in the choir come Sunday.

The Royal Gospel is the band’s fifth album, and they do not appear to be slowing down.  They have adapted to the departures of Zito and Allman and are still a powerhouse, remaining true to their sound.  This album has something for every music lover whether it’s blues, blues rock, soul, funk or reggae.  One of the hottest albums out this year, The Royal Gospel certainly deserves a spin in your house (or car).