Trampled Under Foot Reunion a Street Party With 1,200 Guests 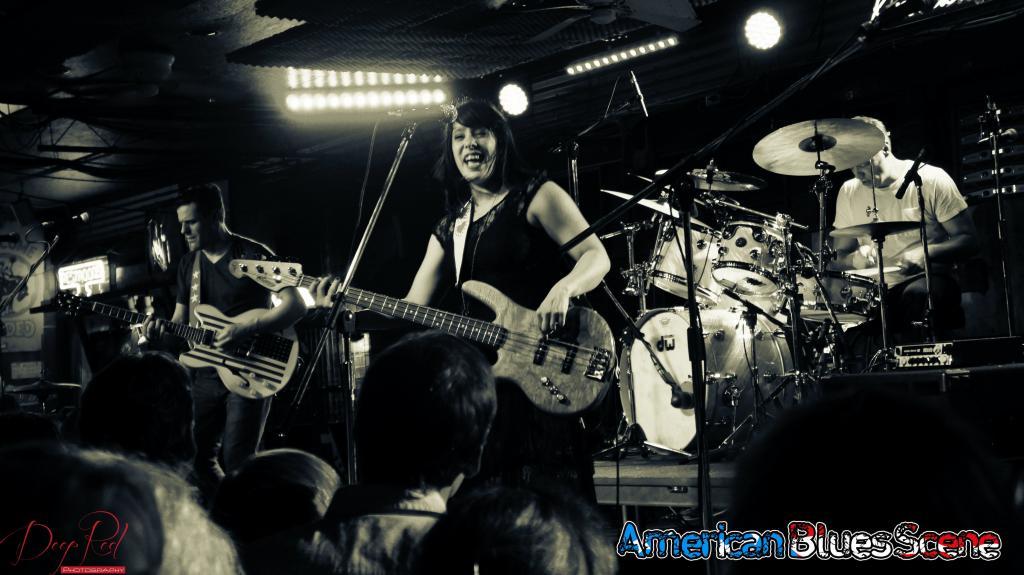 Editor’s Note: Special thanks to Frank and Mary Hicks for their hospitality, all of the performing artists for “keeping it real,” and Caralee White of Deep Red Photography for her wonderful images.

Billed as the “TUFstravaganza,” Kansas City’s favorite family band, Trampled Under Foot, recently performed two home town reunion shows at Knuckleheads Saloon. We were fortunate enough to be in attendance for the Friday night blowout on June 15th, among the capacity crowd of 1,200 rabid fans.

This reunion was two years in the making, and expectations were sky-high prior to the show, with folks chatting anxiously about all the rumored guest appearances and supporting acts. Mostly, however, the crowd was electrified at the prospect of seeing the Schnebelen siblings all together, once more, on one stage. The group disbanded in 2014, after playing as an extremely popular and award winning band for well over a decade. Still, the night’s lineup was undefined and nobody was quite sure of the batting order. It all became crystalline when the first act appeared on stage.

Any show that begins with a seven-time Blues Music Award winner, and 2009 BB King Entertainer of the Year, promises to be stellar from the outset. And so it was when soul blues idol, Janiva Magness and her band took to the stage. On the heels of her most recent release, Love Wins Again, Magness delivered an exemplary, full album’s worth of music to the throng of blues lovers who were, at this point, beginning to crowd up to the outdoor stage. “Sometimes, when you’re on tour, night after night and city after city, you kind of forget where you are,” she remarked. “We don’t get to Kansas City very often, but there’s no mistake that’s where we are tonight, and it sure is sweet to be here.” Her powerful and sultry voice wafted out into the Missouri night, through 11 songs from throughout her amazing career, including her superb cover of Creedence Clearwater Revival’s, “Long as I Can See the Light,” with over a thousand voices singing along.

Anticipating many sell-out crowds at their establishment, Knuckleheads owners, Frank and Mary Hicks, had the foresight to install large screens and projectors in every public and performer area of the the club, including the 220 seat indoor stage area and the 50 seat, “Gospel Lounge.” During the break, many people, not wanting to get amidst the ever growing audience near the outdoor stage, were settling into comfortable seats in various areas to see the show, covered by 3 stage cameras. Between those seats, the patio tables, VIP area, balcony and tables, chairs and bleachers set up in the street, there wasn’t a bad seat in the house.

The word was out that South Florida, slide guitar slinger, Albert Castiglia, and Memphis based vocalist and harp player, John Németh, would both be appearing on Friday night’s blues bill of fare. Once again the murmuring of the crowd lent to curiosity and anticipation. With this kind of star power in the house, who would be next to perform?

That question was answered as the members of Trampled Under Foot began setting up their gear. Scant moments later, the “TUF Love” the band has for its hometown, blasted from the stage with the opening riffs of Led Zeppelin’s, “Rock and Roll.” Bassist and lead singer, Danielle Schnebelen, with her powerhouse voice, belted out, “It’s been a long time since we rock and rolled,” and the fervent assemblage couldn’t have agreed more.

TUF was at its full performance strength with Danielle, her big brothers Nick on lead guitar and Kris on drums, as well as keyboardist, Mike “Shinetop Jr.” Sedovic. The family was gathered and in fine form, with Danielle stating, “Playing with these guys is like riding a bicycle.” Immediately the band broke into the area where Ms Schnebelen really shines, a ballad. Not just any romantic ditty, but a soul stirring rendition of the Gershwin classic, “Summertime.” It took until the third song of the night for them to play an original composition, but it was their boogie-woogie hit, “Hot Headed Woman,” from 2008. With Nick taking the lead vocals, they reminded everyone why they were the International Blues Challenge winners that year.

Many times at a live performance, pauses between songs can be, at the least, irksome, if not exasperating for those in attendance. Not so on this warm summer night. Even though the band did not smoothly transition from song to song, the banter was genuinely comfortable among the artists and sincerely complimentary to the attendees. “Its like Christmas in the summer,” and, “The first time I played here was on a flat-bed trailer in the parking lot. This is way better,” are examples of how Danielle would keep the crowd engaged.

After three more jam length songs, they welcomed Albert Castiglia to the stage. For those who may be unfamiliar with this Miami, Florida artist, his slide guitar and Van Morrison-like vocal talents belie his 46 years. The former Junior Wells guitarist, now recognized as one of the modern blues greats, fell into the TUF groove with the ease of slipping on a favorite pair of sneakers. The ensuing set included original creations such as his current hit, “Let the Big Dog Eat,” along with spot-on covers of classics from Luther Allison and the legendary Sam Cooke hit, “Bring It on Home to Me.”

With most of the group taking a short break, Nick stayed on stage and kept on playing. His guitar, slide and vocals melded into an entertaining mélange that included such varied ditties as “Mean Old Town,” and “Black Betty.” It was now after midnight and the performers made their way back up, recognizing owner Mary Hick’s birthday, and then breaking into a beautifully extended cover of “I’d Rather Go Blind.”

The crowd had begun to thin a bit, mostly in the more outlying areas of the club. The majority of those who were vacating were older fans who one could tell wanted to stay, but the lateness of the evening just wouldn’t allow it. Those who did depart, however, missed out on some of the highlights of the entire performance.

After two different airline complications, the soul man of the evening, John Németh, had arrived and was ready to join in the celebration. Obviously dressed for traveling comfort in tie-dye coveralls, ball cap and his ever present shades, he wasted no time in kicking the whole party up a notch. Using the blaring horn of a passing freight train as a cue, his almost impossibly powerful voice broke into, “Every Night About This Time,” sending shivers of pure delight up the spines of everyone there.

The thrills continued with, “Ain’t Too Old,” “Country Boy,” and a rousing version of “Got My Mojo Workin’,” which featured Németh’s harmonica, and the opportunity for rock-solid drummer, Kris, to really show his chops on an extended solo.

It was about this time, the band came to the realization that they had been playing for over 3 hours, and could have easily called it a night. That is not what happened. Castiglia rejoined the cast, and with him, two more Kansas City area artists. Kris Lager Band saxophonist, Michael Aloysius Lefever-Vargas, and bassist Cliff Moore of the Nick Schnebelen Band jumped into the fray, adding even more dimensions to the sound and freeing Danielle to focus on vocals through a 30 minute, jam session medley.

When all was said and done, it was just shy of 2 AM. Many artists would take a well deserved hiatus in the green room to recuperate, but all the players from this night’s blockbuster performance came out front, signing autographs, posing for fan pictures, and hugging old friends. It was hard to imagine that in just 18 hours, Trampled Under Foot would once again take the stage for night number two of this reunion weekend.

With all its members touring and recording with their respective bands, when TUF came back together on this night, it was if they had never split up in the first place. Through the playing of cover songs, originals of their own, as well as those penned by their guest artists, their musicianship was exemplary.

Németh summed up his experience, post show, with the best quote of the night.

“It’s family man. I mean they’re a family, sure, but it’s more than that. It’s like, black-eyed peas, fried chicken, cornbread, and greens. Getting on stage with them is like being invited to someone’s home for dinner, and it turns into music.”