Tinsley Ellis Says "Make Your Album for Your Fans" 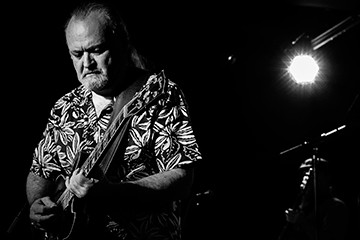 One month after the release of his 20th album Red Clay Soul, American Blues Scene was able to catch up with Tinsley Ellis kicking off his east coast swing at the Rams Head Onstage in Annapolis, Maryland.  In our interview, he shares his experience at the Blues Music Awards and some background on his latest album. He also talks about his influences and playing live music.

Congratulations on your Tough Love album nomination as The Blues Foundation’s 2016 Rock Blues Album of the Year. There was some stiff competition in that category, so this must be a great honor for you?

Yes, It was. Walter Trout got the award. He made a great album, and the people spoke. When I saw I was up against Walter Trout and Joe Bonamassa, I thought, could it be any stiffer competition? Maybe if they threw Derek Trucks in there for good measure! To be nominated is to win and to be able to perform there and to do a couple of tunes is an honor among my peers and friends.

Do you remember what songs you played?

Oh yeah, I went out there and did probably one of my biggest, ‘A Quitter Never Wins,’ and I did a song off the album that got nominated, ‘Midnight Ride.’

On your new album, Red Clay Soul, the track “Givin’ You Up” features Oliver Wood from the Wood Brothers. Can you tell me how this came about?

Oliver Wood was a guitarist in my band for my Storm Warning album which was by far my biggest album I’ve ever put out. He helped me with songs like ‘To The Devil For A Dime,’ ‘A Quitter Never Wins,’ ‘Cut You Loose,’ and some of the other songs I’m known for.

So this song was a collaborative effort between you and Oliver Wood?

Yes, Oliver and I wrote it together 6 to 7 years ago. I’ve been holding on to that song for quite a while. He came and sang the backup on it and played a very similar guitar part on the new album. I think it’s probably my favorite track on the album. Oliver plays the lead guitar throughout the song and sings the harmony part on the chorus. I sing the lead vocal and play the harmonica and rhythm guitar parts.

‘Givin’ You Up’ is also the longest track on the album with sweet improv dueling guitar jam at the end.

When we recorded that live in the studio, the trend is to fade it out with a sing-along chorus in the end. Kevin (McKendre) said ‘No! We are going keep the whole song as is.’ I said, ‘It gets kind of wild at the end,’ and he said, ‘That’s what I like about it!’ We left the whole thing on there, on faded so it sounded just like you were in a nightclub listening to it or at a blues festival.

The influences of Red Clay Soul include a mixture of soul, rhythm and blues, rock blues, and blues.

In my albums, I’ve always sort of mixed the rock which is my heritage and the blues which is my love. I couldn’t make an album without doing both those styles (rock & blues) they are so closely intertwined. With this album, I wanted to get some of the soul music in there too. A little bit of an Atlanta, Georgia feel to it.

You say that the Red Clay Soul is a celebration of the sound that is distinct from that area of the country-Georgia, and I like your quote “It’s where the blues got its soul.”

In Georgia, there are a lot of people that mix blues with soul, like Clarence Carter, Otis Redding, Ray Charles. Georgia is where the blues got its soul.

Lets talk about the opening track on the album, “All I Think About.” Is this maybe a little bit of a self-reflection?

A guy made that comment one time, and I thought what a great song title. ‘I ain’t much, but it’s all I think about.’ It’s funny, but I think we all have our moments like that, where we feel like king of the world and the next day we feel like we’ve been kicked to the curb. We are all an interesting collection of people.

Yes, we are. I hope that the track “Party For One” isn’t a self-reflection?

That is another tongue and cheek song. Again, I heard another guy say ‘Paging Mr. Bitter, party of one.’ Which means if you’re bitter, no one is going to want to hang out with you. I wrote that in the style of Mose Allison. He wrote so many funny blues songs. What a great writer. He wrote one that says, ‘My mind is on vacation, but my mouth is on overtime.’ I thought ‘Party of One’ is definitely the bluest song on the album. I wanted it to be an homage to Mose Allison.

There were also some distinct keyboards by Kevin McKendre on this track.

Oh yeah, Kevin is great, and he’s from your area of the country, from the Washington, D.C. area. He got his start playing with artist like Big Joe & the Dynaflows. He moved to Nashville and plays and records with people like Delbert McClinton, and Brian Setzer. He has a studio (Rock House) in Nashville. We’ve been together since 1996 in the studio. I don’t know if I could do what I do without him. He’s been on every studio album I’ve done in the past 20 years. Now, he makes the albums and co-produced this record. He had ideas for this album that I don’t know if I could have come up with on my own, so I allowed him to co-produce.

Why is Red Soul Clay so much different than the other 19 albums you’ve put out?

That is certainly a good question. I don’t want to be an artist that makes the same album over and over again, but by the same token, you can’t go wrong making an album for your fans,, so you don’t want to deviate too much. What separates this one, I think is I really wrote a ton of songs and really picked the best ones for the album. Maybe this will be known for the songwriting but also the fact that Kevin McKendre produced the album. He insisted we record live in the studio like we did back in the old days. This is very much a live album done in the studio. Very little was fixed on it, very little redone. I would say 95 percent was live. Make your album for your fans. You can’t go wrong, and that’s what we did.

Tell me about the state of radio play and the promotion of blues rock music?

The rock stations are more geared to the young listeners and the blues more towards the older listeners, although it was not always like that. But lately, it seems at blues festivals people are more in their 40s and 50s. Blues is an adult themed music where we talk about jobs, taxes, love, divorce, and death. Young listeners don’t necessary want to hear about the stuff they haven’t gone through like we have. The blues seems to speak to the working men and women, and people who have gone through some stuff and come out the other side.

At your shows, I notice listeners get excited when you slip into a guitar riff. Sometimes these riffs extend a lot longer than they would on the studio album. It just pumps up the blood pressure, in a good way!

Several of our songs on our live album, 2005 Live Highway Man, are over 10 minutes long. I think about the music I listen to. These live albums like Live at the Fillmore East, by the Allman Brothers. They had a couple songs that took up a whole album side. It’s that improv of music when the singing stops, and the music goes into an almost different movement within the song. I had hoped to get to even near the mark that they got (Allman Brothers) with that album, because it was a real high water mark in American rock blues music.