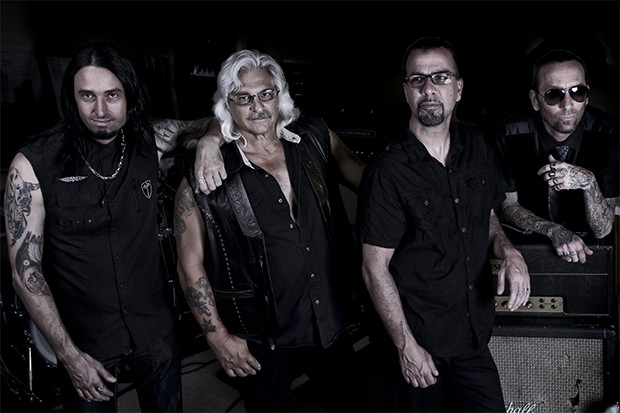 The new, blues rock band, The Apocalypse Blues Revue, will be releasing their eponymous debut album this month. The group was founded by Godsmack veterans, drummer, Shannon Larkin and guitarist, Tony Rombola. Then they added Brian Carpenter on bass, and Ray “Rafer John” Cerbone as lead vocalist. We had to take to a listen to this.

2010. Both musicians, tired of the constant metal playing, put together a side project, and jammed whenever they could.  They added Carpenter when he won a talent contest and met Cerbone in a biker bar. The stage was set. From there they morphed into their current incarnation, signing a contract with Provogue Records, the blues branch of the Mascot Label Group.

Larkin best describes their approach as, “…a little heavier, a little darker, and has some punk rock attitude in the lyrics.” He goes on to say, “We wanted to make something deep that will provoke thought. It had to be evil though. We’re not trying to make it happy. It’s called blues for a reason!”

They unequivocally succeeded, as this album is indeed, dark, heavy, and filled with demonic imagery. Although not quite how you would expect. The opening track, “Evil Is As Evil Does,” is a swampy, southern rocker that brings to mind what the famous devil song-writing Johnsons, Robert and Tommy, may be performing if they lived in this century.

From there it drops into a somber, Chicago style blues track describing the grip, and consequences of addiction. “Junkie Hell,” pulls no punches with lyrics such as, “Man, she was the queen of the prom, now she’s just a crack whore.” It evokes graphic images with no apologies, though the title should have given us a clue.

Some songs are reminiscent of other artists’ work, but modernized and made their own. “Devil Plays a Strat,” is an obvious nod to Charlie Daniels‘, “Devil Went Down to Georgia,” albeit ‘Ol Scratch wins this one. “I Think Not,” begins as a sweet, jazz-infused, I got done wrong song, but once again, the tables get turned, hard.

One of our favorite tracks is “Whiskey in My Coffee.” This is a sly, rockabilly meets surf guitar, shuffle describing a standard morning on the road for a hard core, road weary musician, facing yet another day. The band has released it as an instant gratification track, which can be heard on their website by following the link below.

“Blues Are Fallin’ From the Sky” is another favored tune, with its musical change-up midway through and its crying guitar. Written on a lonely, rainy day while on tour, this is string bending blues that even the most staunch of purists will recognize, regardless of its rock backdrop.

Whether or not to add a sense of legitimacy to their genre jump, Rombola brought in Memphis guitar great, Eric “Raw Dawg” Gales, to play on the fiery, “The Tower.” Gales is no stranger to the hard, jagged edge of the blues, and meshed, hand in glove, with the band.

With all of their references to the devil, evil, and darkness on this self-titled offering, there is something else that makes it haunting. Ray Cerbone’s voice is unnervingly similar to that of the late, Jim Morrison. Nowhere is that more evident than on the final, bonus track. The only cover song out of the twelve is “Music’s Over,” their take on the Doors‘ “When the Music’s Over,” from the album Strange Days. Morrison and company would often perform this 11 minute epic as an encore, and The Apocalypse Blues Revue rightfully puts their truncated, 6 minute version at the tail end. Cerbone’s uncanny vocals make it sound as if Morrison had risen from his Paris grave and sat in on this session.

The Apocalypse Blues Revue isn’t for everyone. Only those with a hard rock heart and blues soul will truly appreciate this effort. The musicianship is exemplary, the lyrics thought provoking, and the overall feeling, ominous. To quote their own, spot on, description, “The quartet honors blues traditions, while etching their stamp on the genre in blood.”