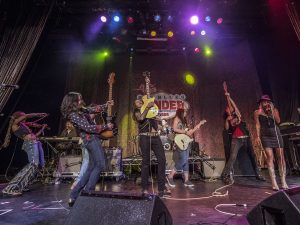 The pre-event excitement for the 4th Big Blues Bender, based on the scheduled bands and the long list of “At-Large” performers (that kept growing), was completely satisfied! In fact, it exceeded all expectations by the majority of the attendees who came to this Las Vegas festival in a hotel. The staff’s commitment to excellence and willingness to “listen” and make both immediate and long-term corrections each year has made this young festival a premier Las Vegas Blues event that will be a “sell-out” for years to come.

As the list of “At-Large” musicians continued to grow during the year, the mystery of how they would all find a place to play was handled brilliantly by Jimmy Carpenter, New Orleans Saxophone player, and music director. The nightly jams became mini-festivals, enriched and led by The Bender Brass (Jimmy Carpenter, Randy Oxford, Doug Woolverton, Mark Earley, and Deanna Bogart), and Bender Jam Band regulars – Alastair Greene-guitar, Russell Jackson-bass, and Michael Leasure-drums. 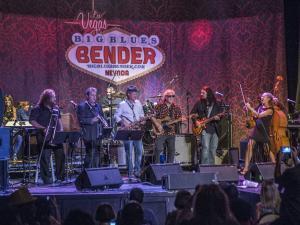 The Jam Schedule was handed out upon arrival, but the entirety of who played at the jams was always a delightful surprise. The players also included scheduled band members and musicians from across the country who came to The Bender to just be a part of this colossal gathering. The jams ended in the wee hours of the morning only when the janitor kicked them out of the showroom and the musicians wandered out to the casino to join the Piano Bar Jam, hosted by Mitch Woods or Leon Blue.  When not scheduled at the nightly jams, the Bender Brass and “At-Large” performers joined the scheduled performances for some incredible interactions during the day included Anne Harris, fiddle; Taz Niederauer, guitar, and on break from his Broadway gig “School of Rock.” Also included in this group were Johnny Sansone, harmonica, and accordion; Annika Chambers, searing vocals; Mike Zito, guitar; Bob Corritore, harmonica; Bob Margolin, guitar; and on it goes.

One of the best-scheduled sets was when all of the women musicians of the festival joined the incredible Jane Lee Hooker band for a Ladies Jam. In addition to Anne Harris and Deanna Bogart, the jam included Teresa James, Shari Puorto, Terrie Odabi, Mindy Canter, and young Grace Kuch. It is still a WOW! 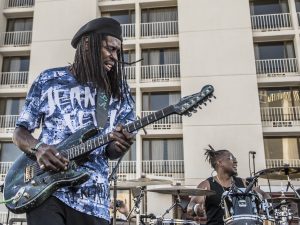 In response to previous years requests and popularity, the Piano Bar in the casino has been expanded with more seating, a full stage, and scheduled performances.  Billy D & The Hoodoos (from Portland, OR) hosted all-day jams, with both scheduled and non-scheduled pro performers from across the country joining in.  The entire outdoor pool venue has been completely remodeled by the Plaza Hotel and now included two stages, cabanas, covered seating, three bars, and a pool that was always full of attendees having a great time. There was music all day long, and everyone had a couple of opportunities to see their favorite bands at one of the venues, except the headliners, who were scheduled once in the evenings in the large ballroom. 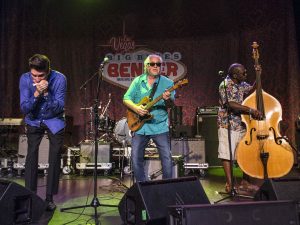 If Aj Gross, event promoter, changed nothing in 2017, the event would be another huge success, as it will be hard to beat 2016. But alas, although lineups will change, his concept and vision will not.  The Bender Brass and Band, At-Large Performers, and the great mix of scheduled performers, who stick around for the weekend and hang out with the close-knit Blues Community Family, is the ultimate recipe for genuine fun and success. And given the reaction to this event, it would be prudent to pre-book for 2017 as it will sell out fast!! This is now a “must go next year and bring my friends with me” event.