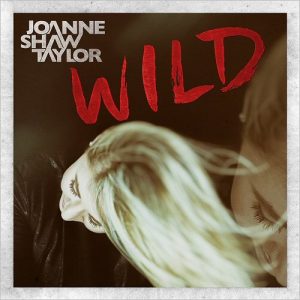 In 2009, British blues guitarist-singer-songwriter Joanne Shaw Taylor released her debut album, White Sugar.  Five years, four studio albums, a DVD and live album later we are treated to her latest effort, Wild.  The album was recorded in Nashville, Tennessee at the Grand Victor studios with an all Nashville-based musicians on the album. Joining Taylor on Wild are Greg Morrow on drums, Michael Rhodes on guitar, Rob Mcnelley on bass and Steve Nathan on keys.

Wild has thirteen tasty, farm fresh tracks, each providing the listener with a different perspective on Joanne Shaw Taylor’s playing.  “Dyin’ to Know” leads off the album and displays  Taylor’s raspy voice and blazing speed on her trusty six-string axe. Fans and music lovers will easily hear the variation  Though the shortest track on the album, “Dyin’ to Know” will become one of the most popular tunes.  This track is also featured as a bonus video on Joanne Shaw Taylor’s Youtube channel, complete with lyrics!

“Get You Back” is a straight out rockin’ blues number featuring Greg Morrow on drums. His hard hitting beat will have fans head banging.  “Get You Back” is the theme song for anyone who has been hurt by their significant other.  Wth a Fleetwood Mac vibe and some groovy piano action, “No Reason to Stay” will keep the fans perched by the speakers drinking in every note.

The title track provides the listener with a perfect, laid back, slow dance beat when the lights go down low.  Taylor’s guitar playing and vocals are fresh, and she sounds renewed. She leaves listeners breathless as the song fades out briefly around the 5:50 mark and then a rockin’ blues jam springs up to finish the song.

Wild is nonpareil, and well worth the wait.  Each song is new and vibrant, reflecting Taylor’s always growing skills as a musician and songwriter. This fine album is sure to be a hit with JST fans, and everyone else should pick up a copy too!