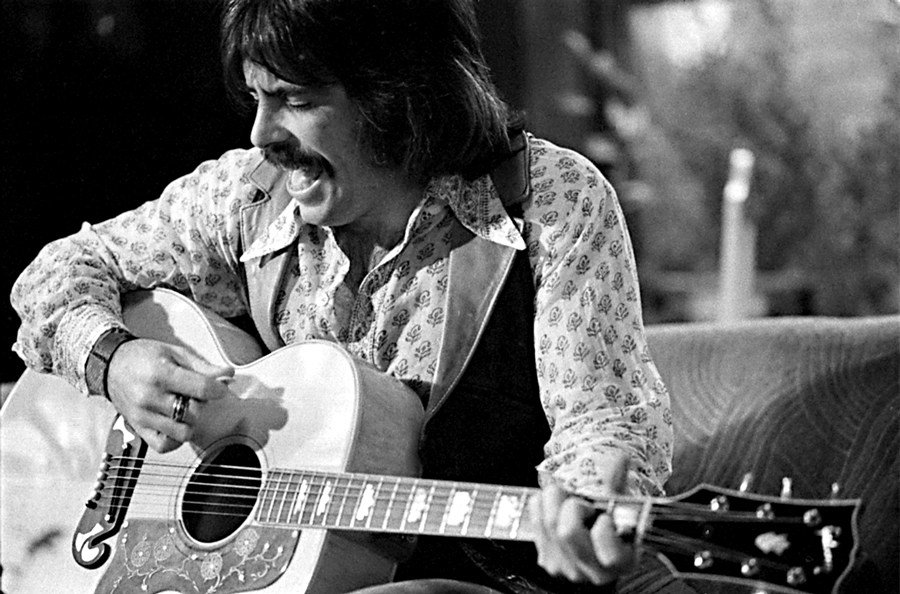 By 1968, Terry Dolan had become a fixture at hip San Francisco clubs like the Matrix and Keystone Korner, and was soon playing colleges, festivals and larger concert venues, opening for big names, including B.B. King, Elvin Bishop,

Blue Cheer, and Taj Mahal. However, Dolan never achieved the mega-stardom of many of his peers from the 1960s San Francisco rock scene. One of the reasons for this was Warner Bros. inexplicable cancellation of his superb self-titled, debut album, a mere two months before its release date. This lost gem is finally getting its due with a release on High Moon Records (Vinyl & CD) on November 25th. Terry Dolan, featuring an all star cast — including Nicky Hopkins (The Rolling Stones, The Kinks), John Cipollina (Quicksilver Messenger Service), Lonnie Turner (The Steve Miller Band) and Neal Schon (Santana, Journey) — is the missing link between the increasingly electric instrumentation of the San Francisco singer-songwriters, and the era of ‘70s arena rock gods. The album captures the dual nature of Terry himself, an East Coast folkie with a penchant for soul-stirring rock ‘n’ roll, his music is equally influenced by Leadbelly, Buddy Holly, and the late-‘60s San Francisco rock scene. Amazingly, the chemistry captured on the album’s eight indelible tracks, and six bonus tracks, have never seen the light of day, until now.

The conception of Terry Dolan is a story in two parts, and about two producers; one for each side of this unreleased masterpiece:

Side A: Terry Dolan moved to San Francisco from Weston, Connecticut in 1965, at the tender age of 21, and quickly made a name for himself with his wild, electric energy and passionate performances. Based on the strength of a demo for his song “Inlaws & Outlaws,”  Dolan was offered a major record deal with Warner Bros. in 1971. Dolan tapped renowned, British session pianist Hopkins to produce, (the only time he ever did so for another artist), and play keyboards on the album. Together, they put together a band of the “Who’s Who” of the San Francisco music community. Prairie Prince, founding member of Journey and The Tubes, played drums, and on bass, Lonnie Turner of the Steve Miller Band. Greg Douglass (who would go on to co-write “Jungle Love” with Turner, and join The Steve Miller Band) and John Cipollina (from the pioneering Quicksilver Messenger Service), shared guitar duties. Rounding out the group were and June, Bonnie, and Anita Pointer, aka The Pointer Sisters, singing backing vocals. The ensuing sessions created the mix of folk-infused, high-octane rock that became the Terry Dolan sound, but with only four of the album’s eight songs tracked and mixed, Hopkins was called on tour by The Rolling Stones, and Dolan was forced to regroup.

Side B: The unexpected departure of the producer/pianist Hopkins was a major setback, but Dolan found a solution the the form of Pete Sears, another virtuoso Englishman who’s numerous credits included Rod Stewart’s early solo albums. Sears would produce the album’s second side and brought on guitarist Neal Schon, who would soon co-found Journey, and drummer David Weber. Greg Douglass returned on guitar. Even considering the six-month break and pressure from Warner Bros, it is no stretch to call Sears the “secret weapon” of Dolan’s unreleased debut album. He shepherded the final four tracks and arranged the album into a cohesive and dynamic release. By September 1972, the album was completed and Warner’s assigned it a catalog number: BS 2669. The record was slated for a February, 1973 release, however, with no explanation ever provided, just two months before it was to hit the record racks of the world, the album was cancelled, and Dolan was dropped by the label. Adding insult to injury, Warner Bros. failed to inform Dolan of their decision. He was naturally devastated, but determined to forge ahead.
Less than six months after being dropped by Warner’s, Dolan formed Terry & The Pirates, who’s revolving and evolving lineup (featuring many of the musicians on his record) became a beloved fixture of the Bay Area music scene over the next 30 years. When he passed away on January 15th, 2012, Dolan’s unreleased album had still only been heard by a handful of people. Now, 43 years later, the music still brims with soul and passion, and with this first-time-ever release of Terry Dolan’s debut album, the world can finally hear how those early sessions, along with  the friendships, collaborations, and glorious hours of music they spawned over the years, still echo across the ages.

“An historic gem – incredible that WB left it on the vine. This is the one that might have sealed his reputation.” – David Fricke, Rolling Stone/Sirius XM “The Writer’s Block.”