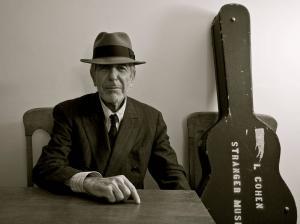 Cohen was almost a mythic figure to several successive generations, in many ways reminiscent of the cultural icon status accorded to Andy Warhol. Where Warhol braved new fronts in the artistic domains of graphics, film, design, and sometimes recording, Cohen explored the boundaries of the human psyche, condition, and intellect.

He was born Leonard Norman Cohen, into a middle class Jewish family on September 21st, 1934 in Westmount, Quebec. Westmount was an predominantly English-speaking area of Montreal. Cohen moved into the Little Portugal neighborhood of Montreal, and it was here that he would write songs that would later be among his most famous works. He would also read poetry in the surrounding clubs and venues. Joining McGill University in 1951, he would graduate in 1955 with a B.A. Degree. During this time at the university he had been president of the McGill Debating Union, and for his poems poems “Sparrows” and “Thoughts of a Landsman,” he won the Chester MacNaghten Literary Competition. Cohen published his first public book of poetry, Let Us Compare Mythologies in 1956. Other schooling that Cohen would attend included a term at McGill’s law school, a year at Columbia University’s School of General Studies.  In 1961 he published The Spice-Box of Earth, his second book of poems.

Over the coming decades Cohen would continue to write poetry, although there were sometimes long gaps between releases. Death of a Lady’s Man in 1978, Stranger Music: Selected Poems and Songs in 1993, and Fifteen Poems, an eBook in 2012, were among the volumes published. He would also publish the novels The Favorite Game in 1963 (reissued as The Favourite Game in 1994), and Beautiful Losers in 1966 (1991, and 2003).

Cohen was also involved in film and television, but had become well known for his recording career. Over the course of almost five decades he released 14 studio albums, as well as 8 live albums. His most recent album, You Want It Darker, on Columbia Records, was just released on the 21st of October, 2016.

“Hallelujah,” was first released on Cohen’s studio album Various Positions in 1984, with many people being more familiar perhaps with the John Cale and later, Jeff Buckley performances of this work. This one work has been recorded and performed by over 200 artists. His poignant, haunting song, “Famous Blue Raincoat,” on the album Songs of Love and Hate, released in 1971, has also been recorded and performed by numerous artists.

It is with profound sorrow we report that legendary poet, songwriter and artist, Leonard Cohen has passed away.
We have lost one of music’s most revered and prolific visionaries.

A memorial will take place in Los Angeles at a later date. The family requests privacy during their time of grief.

In a farewell letter to Marianne C. Stang Jensen Ihlen, whom he lived with in Greece in the 1960s following her death on July 28th, 2016 Cohen wrote, “… our bodies are falling apart and I think I will follow you very soon. Know that I am so close behind you that if you stretch out your hand, I think you can reach mine.”