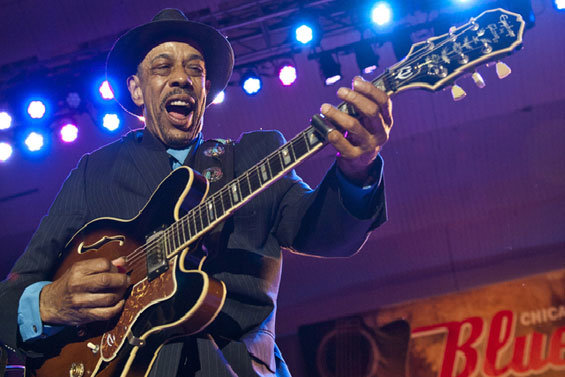 Remember summer camp when we were kids? We’d travel away from home, spend a week or more in an exciting, perhaps unfamiliar place, learn new things, make great friends, and remember it forever. Now, have you ever wondered why there isn’t a thing like that for adults? For blues lovers and musicians of all skill levels, now there is.

Chicago Blues Camp has announced enrollment for the Summer 2017 sessions. An intensive learning and performing “camp” experience for adult musicians, it offers an opportunity to learn Chicago-style blues, from talented Chicago musicians, and then play that music in the city where it all began.

The brainchild of Executive Director, Brett Champlin, Chicago Blues Camp is like nothing else out there. “I got some really good advice from someone who has been running a country blues workshop out on the west coast for about 30 years,” Champlin told us. “Its a vacation experience, I guess I would say. Its a place you go for a week, play nothing but blues, and be immersed in playing the blues with other people that just want to play some blues.”

The camp will offer two one-week sessions, that bookend the 2017 Chicago Blues Festival. Sessions are scheduled for Monday through Friday, June 5th through the 9th, and June 12th through the 16th in downtown Chicago. Weekend stay over packages are available for those who also want to attend the festival.

Although the camp is dedicated to teaching Chicago-style, urban, electric blues through lessons, presentations and performances, campers won’t be spending their whole time in the classroom. Much like the great evening bonfires of our childhood camp days, Chicago Blues Camp attendees will participate in nightly excursions through the Windy City.

“We’ll be going on outings to Willie Dixon’s Blues Heaven, Buddy Guy’s Legends, Rosa’s Lounge, Kingston Mines, all the famous blues clubs,” Champlin explained. “We’ll be holding the classes at the College of Performing Arts at Roosevelt University. We’re using their studio classrooms. Buddy Guy’s is just about a block away… for the others we’ll have rented buses with about 20 people going to each club, each night.”

Due to classroom size restrictions, each of the five classes, will be limited to approximately 12 campers each week. For the classroom portions its learning the music, and much more. Champlin says, “We have authors, academics and performers giving lectures about blues history, performers, and the development of Chicago blues. They’re actually more workshops than lectures. Its an important aspect to understand how it developed, and how it all goes together.”

When we asked Champlin what gave him the idea for the camp, his answer was very personal. “I got the idea because I was going to harmonica workshops, and harmonica conferences, as well as a couple guitar camps. Jorma Kaukonen, who used to be with Jefferson Airplane, has a camp called Fur Peace Ranch. It was a lot of fun. I really enjoyed it, but what I really wanted was to focus more on Chicago-style blues. I kept looking around for a place like that for myself, and there was nothing. So I thought to myself, hmm, there doesn’t seem to be anything like this. I guess I should start one.”

“I realized that a lot of players wanted to know more about Chicago-style blues,” he continued. “The subtleties of playing with an ensemble, the intricacies and multitude of variations on the basic blues themes. That became the impetus of the blues camp idea. In the classes, students learn from local blues masters – what they do, and how they work with the other musicians they’re playing with.”

Champlin is a retired Fortune 500 company IT Manager and educator, but he’s also a seasoned musician in his own right. He, and the Devil’s Kitchen Band, were part of the famed Northern California music scene in the 1960s. They performed in clubs, both large and small, up and down the left coast, opening for artists including Taj Mahal, Lightnin’ Hopkins, and Big Mama Thornton. They played tiny clubs with Carlos Santana and Creedence Clearwater Revival. Folks like Elvin Bishop, Jerry Garcia, and Phil Lesh were frequent jam partners with Champlin and company. The combination of his performance experience, business management acumen, and the camp’s proximity to the birthplace of the Chicago blues is what sets his camp apart from all the others.

Cost for the week-long camp is $2,195, which includes 30 hours of group instruction, 10 hours of jam sessions, the presentation/workshops, nightly outings to the famous area blues clubs, lodging, and meals. 20 percent of all profits are donated to non-profit organizations that support the blues community.

With his extensive business background, Champlin did a cost comparison analysis to approximately 50 other similar programs. “We priced it about midway,” he said. “Its not the cheapest, but its not even close to the most expensive when compared to similar programs. You have to remember we’re in downtown Chicago, so it may be a little more expensive than I would have wanted, but with all that the camp includes, I think its priced just about right. There are other places, where you actually camp out, that aren’t in a major metropolitan area, that are less expensive, but to put all this together, that’s just what it takes. I think its a good value for what you’re (the campers), are getting.”