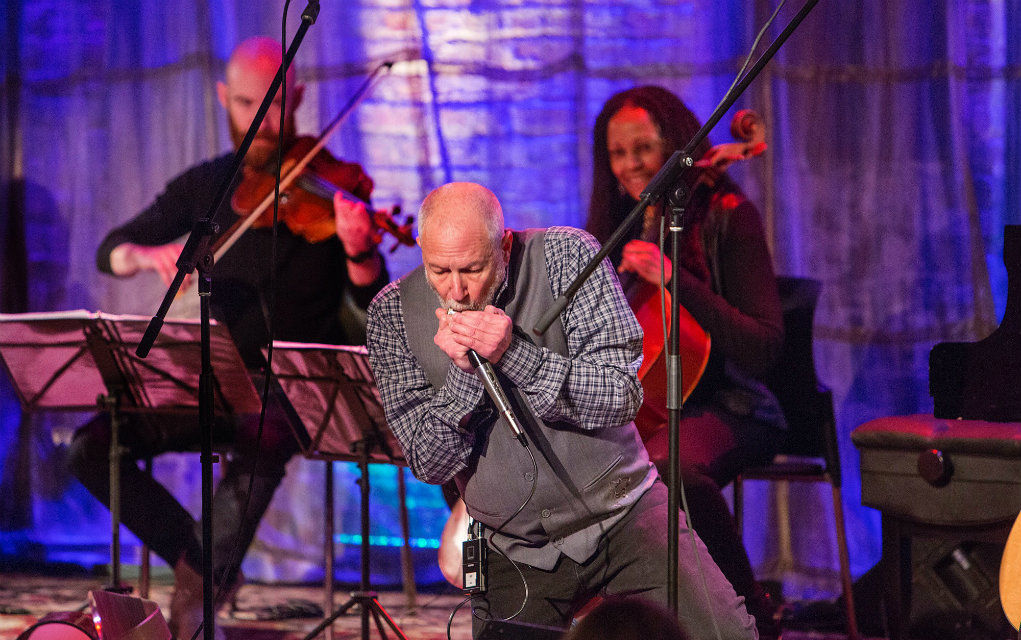 Corky Siegel, is a talented multi-instrumentalist, who has played with the biggest names in blues, rock, jazz, and classical music. For over five decades, he’s entertained from the bare-bones Pepper’s Lounge in Chicago, to the Fillmore West, and far beyond. Credited for introducing blues harmonica to classical music, his latest release, Different Voices, is a culmination of his life’s experiences set to blues harp and a string quartet.

We had the opportunity to speak to Corky about his time in Chicago, the upcoming festival, and just what makes his music so unique.

You are taking part in the big Paramount anniversary show that’s coming up in September correct?

What is your personal connection to the Paramount label?

Oh yeah, one of the great, early Paramount recording artists.

My partner, Jim Schwall, was good friends with Big Bill Broonzy. Big Bill took him all over the city of Chicago to see the great blues players. He took him to see Muddy Waters, for example. Jim never told me, he never tells me anything, but Jim was in Pepper’s Show Lounge, before we went in and got the residency there. I had no idea where we were walking into. I was completely naive about it, but Schwall knew about it.

In fact, Schwall got me started on harmonica. He was also Mike Bloomfield’s first harmonica player. He’s done some amazing things. So if I have a connection to Paramount, it’s certainly through Jim Schwall. Also, a number of players who sat it with Siegel-Schwall during our residency there would have surely been on that label.

Is that where you really started playing blues?

What’s really interesting about me, is my first three records were Muddy Waters, Howlin’ Wolf, and Jimmy Reed. I played those, day and night, for months and months, and danced, ecstatically around my parents’ home. But, I never read the back of the albums. So when Little Walter came to sit in, I said, ‘Why don’t you come back at another time, when you’re feeling better.’ He had been drinking, you could tell. Well, the audience said, ‘Hey, let him sit in. That’s Little Walter.’ Here I am at Pepper’s Show Lounge, in 1965, being taken under the wing of all these great blues players, and I don’t know who Little Walter is. Anyway, he sat in with us, and I’m thinking…that’s amazing…that’s Little Walter.

I was completely naive. I had never studied the history of the blues. My focus was on the music. I know I was bad for not studying the history, but I just didn’t. I left that to everyone else.

So you weren’t much of a history buff?

I’ve always been so deep into the music. What’s going on? What’s that feeling? How do you get that? I would chase every other musician out of the room. Nobody wanted to talk to me. I was into trying to find out the mechanical elements that create the spiritual sounds. I dug deep, and deep, and deep into that, beyond what any other human being wants to talk about. So instead of being into the history of the blues, my connection was underneath the surface. The best way I can describe it is digging deep.

Can you give me an example?

I started learning to play a shuffle on the piano. I played two notes, you know, that make up the shuffle. I played them over, and over, and over, without ever making a chord change. I did that for months, trying to find what’s going on in there. Where are the goose bumps coming from? What happens? Why do these blues players sound this way, and other people, playing the same lick, don’t sound that way. What are all those things that contribute to the ecstasy of that feeling? I’m still doing that to this day, fifty years later.

Have you found the answers?

I can tell you the mechanics of what creates the ecstasy. I don’t teach it, but if anyone ever wants to ask, I’m happy to tell them.

So you dug to the very soul of it, and created a blueprint.

Well, I found out, quote, how do you do it. When you go up to people and ask, ‘how do you do that?’ they go, ‘it’s a feel thing.’ With a feel thing, you either got it or you don’t. You can get it. Some people have it, and some people don’t. For the ones who don’t, there’s a door that they can go into, where they can get it. It takes great effort, but there’s a way to do it. It’s not complex. It just takes a lot of focus.

We like saying things like ‘playing from the heart.’ In any form of music, what do you mean when say, ‘play from the heart?’ I would ask people who told me that, ‘what do you mean?’ They would start trying to explain what playing from the heart is, but I wanted to know, how do you do it? No one, in my whole life, was ever able to tell me how they do that. So, I spent many, many years trying to find out how to do that, and now I know how to do it. It’s simple. It’s stupid. Those people who want to listen to me, I’ll tell them how to do it. Most people just want to know how to play the guitar, how to play more notes, how to play faster. That’s not my expertise. My expertise is giving people goose bumps every time I pick up my instrument.

Pardon the pun, but that gets to the very heart of it.

Not to put myself on a pedestal, because I’m still working on doing those things. Just because I can use my expertise to tell someone how to do it, doesn’t mean that I’m an expert in doing it. Some people can teach things that they can’t do themselves. I’m always working on this stuff, exploring it, and experimenting with it. I do know what separates one player from another. With blues, with classical music, with jazz, I just have those secrets. Most people aren’t interested in those.

You wrote a book along this very topic right?

The book is on dynamics; on intensity variation, between forceful and delicate. If you can be able to understand what that means, and actually accomplish it, you’ll get it. In my workshops, it only takes three or four minutes, because you have my guidance. There’s also things in my workshop that aren’t in the book. They have to do with rhythmic dynamics. I call it rhythmic dissonance. When you add that to your playing, it creates a lot of extra energy. You don’t even need to be an accomplished musician. It has nothing to do with skill. You can reach full-tilt expression, with a very limited amount of ability. That’s the amazing thing that I’ve discovered.

With your years of experience in tapping into the emotional levels of music, has that aided in your creation of the genre of Chamber Blues?

It’s an incredible boon to be able to do something like that. It doesn’t really matter what you’re doing in music. If you apply the dynamics, it’s really going to make is soar. People will love it much more, automatically. Without the dynamics, music is still great. With the dynamics, it becomes a spiritual thing. 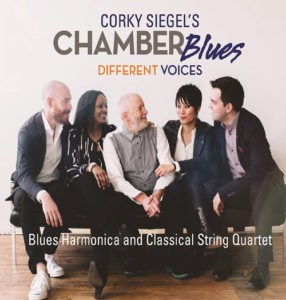 That’s correct, and it started in 1966. It was Seiji Ozawa’s idea. Bill Russo mentored me on it. With the creation of the first symphonic piece, that’s where all the exploration and experimentation happened. It turned out to be really interesting. Seiji insisted that I pursue it. Both Howlin’ Wolf, and Muddy Waters were very pleased with the idea. Sugar Blue was the first one who actually came up to me and said, ‘Corky, thank you so much for doing this, for bringing the blues to classical audiences.’ Of course, I never forgot that. No one else has really picked up the ball and ran with it. So far, I’m the only one still doing it, and it’s been a great success. But, it was really given to me. I didn’t create the idea or anything.

Today, you’re still doing it, with the release of Different Voices. Are you touring that album now?

Well, we can’t do everything, because some of the Different Voices are guest artists. But we can play most of the stuff, even without the guest artists. For example, if Sam Lay isn’t there, we’ll still do “Italian Shuffle” with another blues song, and I’ll sing it. We still do “Missing Person Blues,” even if Ernie Watts, the sax player, isn’t with us. We just do a slightly different version of it.

Speaking of Sam Lay, you have quite a history with him as well.

Most of the guys that you’ll be performing with at the Paramount Music Festival have a historical context with you.

Yes, and I love them all. I really appreciate them letting me come in and join them.

I think seeing all you guys, playing together on one stage, would just be mind-blowing. 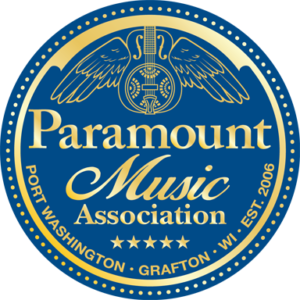 Well, we do have a history. I mean, we backed up Chuck Berry. In Chicago, at Pepper’s, we were backing up everybody. Of course Billy, John, Sam, and Eddy, were all in the mix then too, with their respective acts. We backed all the blues masters. But many times, people would just come and sit in. Little Walter we talked about, Howlin’ Wolf, Muddy Waters, Junior Wells, Buddy Guy, Lefty Dizz, James Cotton all sat in. Howlin’ Wolf used to come up to the North Side and sit in with us. He was actually a big fan of Siegel-Schwall. A lot of our contemporaries weren’t fans of us. They were very derogatory about us, because we weren’t playing ‘the right stuff.’ But Wolf and Muddy loved it, for that very reason. We were doing something a little different. It wasn’t on purpose, we were just playing what we felt we could play. It turned out being more of a jug band kind of feel.

That’s probably why Wolf and Muddy loved it so much. They did they same thing.

Right? You’re right. As Charlie Musselwhite said in a radio interview. Somebody said to Charlie, ‘What about the blues tradition?’ Charlie said, ‘What do you mean tradition? I thought tradition meant change. If tradition didn’t mean change, we’d all still be beating on logs.’ That’s my favorite quote from Charlie. I think we became really close friends because of that quote. I still talk to Charlie almost every week.

Shemekia Copeland is going to be in Port Washington as well. Did you ever play with her dad?

What’s next on the horizon for you?

You mean besides death? (laughs) Well, as you mentioned, the new CD came out in April. For August, I have a month off in Chicago, and I’ll be spending time promoting that CD. I think this CD is a culmination of all my experiences with Jim Schwall, and Rollo, and Sam Lay, and Pepper’s, and all the blues masters, and Joni Mitchell.

Yeah, Jim and I had produced Joni’s last demo tape that got her into the thing. It had “Circle Game” on it, so we produced her hit, “Circle Game.” I also worked with Janis Joplin. Being in the middle of the San Francisco scene, all the tours with Siegel-Schwall, my tours with Bob Hope, and George Carlin.

So you opened for these great comics?

Yeah, it was just me, Bob Hope, and a singer, and then it was just me and George, along with my wife and his manager. They were really fun tours with these people. All of that is part of this recording, Different Voices. Promoting this culmination of life is what I’m focused on currently.