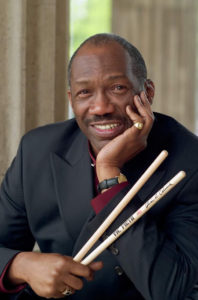 The word legend is thrown around a lot in the music business. In the case of Alvin Queen, the term fits like a glove. Queen, the former drummer for Oscar Peterson, has collaborated with a veritable who’s who of music royalty, including Nina Simone, Horace Silver, George Benson, Ruth Brown, Buddy DeFranco, Wynton Marsalis, and myriad others. Queen was set to perform at a concert in Washington, DC on November 15th, at the behest of The French-American Cultural Foundation. That is until the Department of Homeland Security stepped in.

You see, although he was born in the Bronx, New York, and has been a professional drummer since the age of 11, Queen has lived in Europe since 1979. Several other famous musicians had done it, including Memphis Slim, Champion Jack Dupree, Art Taylor and others, and Queen liked the fact that Europeans didn’t put pressure on him to water down his music.

Until 2016, he held dual citizenship with the United States and Switzerland. Over the course of his career, Queen worked numerous times for the US State Department as a Cultural Ambassador, and participated in several tours of Brazil, Africa and Japan. Queen has held a U.S. passport, and regularly worked under the auspices of the American government, for over fifty years of his life. Like many citizens, he’s had brushes with the law, but these have never impeded his ability to enter and exit his native country. That is until now.

The November 15th concert, entitled “JAZZ MEETS FRANCE,” has Wynton Marsalis as its Honorary Chairman, and Dr. David Skorton, Secretary of the Smithsonian Institute, is Master of Ceremonies. The event marks the centenary of the US entry into WWI and specifically honors the Harlem Hellfighters, African-American soldiers who served in WWI, and who introduced jazz music to France and the rest of Europe.

Queen was informed last week that, due to a run-in with the law as a youth, a half century ago, while a minor, he would have to apply for a waiver from the U.S. Department of Homeland Security, despite the fact he was born in the USA. This would take months, making it virtually impossible to participate, barring Presidential decree. For this occasion, the US State Dept had only to apply for an “O1B Work Visa” in order for Queen to enter the United States. This was done correctly, but after the process was completed, fingerprints matching a 1967 FBI file were dredged up and presented as a reason to prevent him from entering the country. Apparently the “travel ban” currently in effect, extends to a then 16-year-old drummer who once sat in with John Coltrane.

“Sadly, this doesn’t surprise me one bit,” commented Queen, now 67, from his home in Geneva. “I’ve spent months preparing for this concert. Dozens of others are also implicated in its planning. Funny thing, I gave up my U.S. passport to make life simpler at tax time. I never dreamed I would one day be denied entry, and with such ridiculous reasoning. I am frankly disgusted to be disrespected in this way, after a half century devoted to music.”

“If someone wants to apologize to me and make this right, fine,” Queen added. “But I’m not holding my breath. In the meantime, I’ll bring my music, this American art form, to every other country in the world. I know they like me in Canada. I’ll start there.”

Queen will be performing in Montreal, where he is set to give a master class with pianist Wray Downes on Friday, November 3rd, at 1:00 pm at Concordia University. He’ll then perform a full concert with his trio the following evening, at Upstairs Jazz Bar & Grill, for two sets, at 7:30 and 9:45 pm.