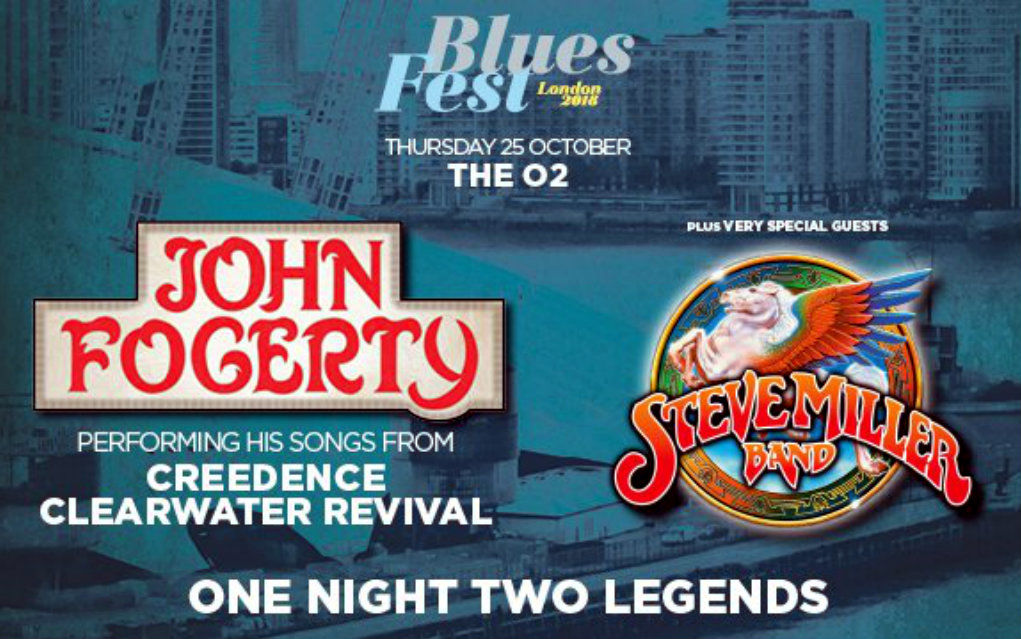 Grammy-winning Rock & Roll Hall of Famer John Fogerty is the first headliner announced for this year’s BluesFest, which returns to The O2 in London October 25th – 28th.

Fogerty will be performing songs from his days with Creedence Clearwater Revival. It is his first headline show in the UK since 2008. Fogerty will be joined on the bill by the Steve Miller Band, who this year celebrate 50 years since the release of their debut album Children Of The Future. Fogerty and Steve Miller Band will perform their own full sets on the opening night of the festival.

BluesFest celebrated a record year in 2017 with performances by Steely Dan, Hall & Oates, Kenny Wayne Shepherd, The Doobie Brothers and Gov’t Mule contributing to ticket sales of over 40,000 across three nights. This year’s festival will expand to run across four nights from Thursday October 25th – Sunday 28th and will once again utilize all areas of The O2 complex, including the 14,000 capacity Arena and Indigo at The O2. Further artist announcements will be made over the coming weeks.

“Of course it goes without saying that John Fogerty and Steve Miller Band are two acts that have been on our wish list for some time,” said Leo Green, Director Of Live Events for Live Nation. “We’re delighted to have confirmed exclusive shows with them for this year’s BluesFest.”

“BluesFest 2017 was a resounding success and I’m incredibly pleased with the progress we’ve made over the last seven years,” Green continued. “Once again we’ll be at The O2 for BluesFest London and following the success of the inaugural BluesFest Dublin last year, I’ll be looking at increasing our international presence and expanding into a number of new territories whenever and wherever appropriate.”

BluesFest 2018 will be the only UK appearances for both Fogerty and Miller.

The Steve Miller Band is currently on a North American tour that includes a stop at the New Orleans Jazz Fest. On June 12th, they begin their summer tour with Peter Frampton.

Fogerty has a six-night stint at Wynn Las Vegas before beginning the much anticipated Blues & Bayous Tour with ZZ Top on May 25th.

Tickets start at £45 and go on general sale on Friday, March 9th at 10 AM (UTC). The O2 pre-sale is already underway and the Live Nation pre-sale begins at 10 AM (UTC) on Thursday March 8th.