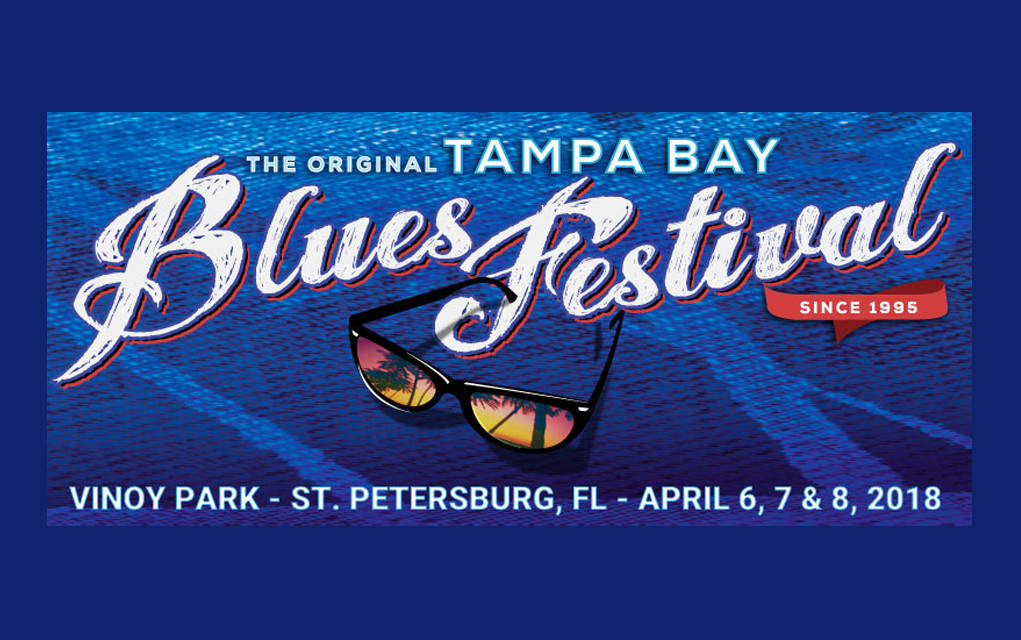 Local legend Chuck Ross has had his hand in the blues for the better part of 40 years. It all started with his band, Backtrack Blues Band. He then went on to own the Ringside Cafe, which has always been a staple venue for blues aficionados and music lovers alike in Saint Petersburg, Florida.

In 1995, he took booking bands to the next level by founding the Tampa Bay Blues Festival. This premier festival has been host to the biggest names in the blues genre. Devotees of the Tampa Bay Blues Festival will be happy to know that this year will see Buddy Guy and Delbert McClinton returning to the stage. In my latest interview with Chuck, he tells us everything we need to know about this year’s jamboree. The festival dates are April 6, 7, and 8, 2018 right on the shores of Tampa Bay in gorgeous Vinoy Park. Please join us in perfect weather as we keep the spirit of the blues alive.

Chuck, you’re the founder of Tampa Bay Blues Festival. How did that idea come about?

Well, back in the late 1980s I owned a nightclub here in Saint Petersburg called Ringside Cafe, and we were producing a lot of blues music shows there that included bands like Johnny “Clyde” Copeland, Delbert McClinton, Roomful of Blues, Rod Piazza & The Mighty Flyers… All kinds of bands were playing there back in the day. Well, I sold the Ringside in the early ‘90s. I continued to have an interest in producing music. And so, I transitioned from running a nightclub and booking bands to starting a blues festival. And that was back in 1995.

Wow. So, you owned the old Ringside?

I owned the old Ringside Cafe — started it. It was the first blues nightclub in Saint Petersburg.

You know, I didn’t know that about you. And I was always a huge fan of that place — the old one.

The old one when it was good.

It used to have great food and great entertainment. Once we sold it, a lot of things changed. They didn’t care too much about blues music, and I don’t think food was a high priority. So, it kind of went downhill.

Yeah. Think they had a house band last I went. Where does this festival take place?

Well, the festival takes place at Vinoy Waterfront Park, which is right in downtown Saint Petersburg on the shores of Tampa Bay. There’s a huge grassy, beautiful park right on the water within easy walking distance to downtown Saint Petersburg. It is truly one of the best outdoor music venues I’ve ever been to. And of course, being right on the water it’s truly magnificent.

Agreed. So, what other accommodations can people look forward to that downtown has to offer?

Well, downtown Saint Petersburg has been through quite a renaissance over the past decade; lots of new restaurants, hotels, nightclubs, entertainment. So, it’s a very bustling, vibrant, hip kind of community right now in my judgment, which makes coming to the Tampa Bay Blues Festival even more fun. Because you can go to the festival during the day and go downtown later at night.

The upcoming Tampa Bay Blues Festival is scheduled for April 6, 7, and 8, 2018. The festival technically begins Thursday night on April the 5th at the Palladium Theater in downtown Saint Petersburg, where we are doing a show with John Nemeth, who is bringing his large horn section along with his band this trip. So, it’s going to be a really fun party at the Palladium Theater. It starts at 8 PM, and you can buy tickets online at our website. That’s a great way to kick off the festival weekend and to catch up with all your friends from around the world who travel to the blues festival.

Can you tell me about the bands selected for 2018?

I believe that the lineup we have this year is probably one of the strongest, if not the best, that we’ve ever produced in our past 24 years. It has got some of the preeminent blues guitarists of all time on the roster, starting with Chicago’s legendary Buddy Guy, multiple Grammy Award winner Robert Cray, one of the best young female singers in the world, Beth Hart — is also appearing.

Other guitarists include Ronnie Earl from New England and Eric Gales, who is a young, up-and-coming, brilliant guitar player. So, there’s just so much talent. Of course, as you know, Delbert McClinton is also performing; John Nemeth; Janiva Magness; Mississippi Heat; Sugaray Rayford; Tad Robinson. The list goes on and on. It’s a great lineup, and it’s all spelled out at our website.

How do you usually go about the selection process for the bands?

Well, as you know, I’m a musician. So, I’ve been playing music since I was a very young guy…

With a lot of these musicians.

And have performed with some of these artists that we just discussed. You know, I know a lot about blues music because I’m a performer as well as a fan. I pretty much make the band choices myself, based on past experiences I’ve had seeing all of these artists perform in various locations and relationships that we’ve developed over two decades. Of course, I always get input from friends and colleagues and radio DJs; folks like that are more than willing to give me ideas. At the end of the day, I’m the one who is responsible for making the selections.

Right. So, have there been recurring acts that you are really proud to keep hosting?

Well, Buddy Guy comes to mind. He’s played a number of times. Last year, he performed. He was so good last year, and I think put on the best show of the entire festival — and a lot of other people agreed — and we thought that we would break precedent and have him return two years in a row.

That’s something we’ve never done in our whole history, but we are making an exception for Mr. Guy. I mean, he is 80 some years old; we thought that he certainly deserved a second return visit. He won’t be performing in Florida for an entire year, so it’s not like he’s in the area. So if you want to see Buddy Guy, you’ll have to come back to the Tampa Bay Blues Fest in 2018. That’s one example.

Delbert McClinton also comes to mind. He’s played a number of times. John Nemeth is a big favorite of mine, and he has likewise performed.

There’s quite a few other performers who are new this year. It’s a mixture of bands we have relationships with through the past and new acts. Robert Cray is also a guy who has played our festival a number of times over the years but probably hasn’t been back to the Tampa Bay Blues Festival in 6 or 7 years now. So, we’re happy to have him back.

Yeah, that’s a really good lineup. You have a special Blues Club VIP program. What does that entail?

The Blues Club VIP program is designed for the serious music lover who — and many of whom travel from outside of Florida — who want to make the weekend a truly special experience. They’ll sign up for a 3-day VIP pass, and they are listed in our program as a benefactor of the blues festival as a Blues Club member. They also have access to front stage seating throughout all three days; use of the multiple large shade tents on the waterfront; complimentary beer, wine, lunches, and dinners, air conditioning, restrooms, and other amenities.

So, it’s a really comfortable, classy way to enjoy an outdoor festival. We put a lot of effort and pride in what we present there. I think for those who want to try a little bit more of an upscale festival experience, this is the way to do it. We really work hard to be sure that everyone has a great time.

Are there product vendors at the festival?

Yes. Every year, there’s somewhere between 50 to 60 vendors throughout the park, quite a few really good food vendors that bring in all kinds of food from seafood to Cuban-style foods to Spanish cuisine, American treats… It’s all sorts of food.

Over the years, it’s gotten better and better, as we’ve had higher end vendors and food folks wanting to come into the festival. We’ve also had vendors that sell arts and crafts and clothing and hats and music and T-shirts and all other kinds of paraphernalia. It’s fun to kind of walk around and shop a little in between the musical performances.

In addition to the fest, do you have other music events playing for the weekend?

Well, I mentioned that we’re starting on Thursday at the Palladium Theater at 8 PM on April the 5th with John Nemeth. That’s going to be very exciting. And then on Friday and Saturday night, immediately following the Tampa Bay Blues Festival, we have free aftershows which we are producing at two nightclub locations that are famous for live music in downtown Saint Petersburg.

There’s the Ringside Cafe that I mentioned earlier, relocated to downtown. And we also have the Ale and the Witch nightclub, which is downtown. Each of those nightclubs will be offering artists from the blues festival — these are top national blues performers — and they’ll be playing for free at night. So, folks can go after the festival.

And that’s — everyone can go?

Yes. It’s open to the public, it’s free, and we hope that a lot of our blues aficionados will go from the festival right over to the club and keep partying until late at night.

Nice. Is there a charitable component to the festival?

Yes. We are a 501(c)(3) nonprofit foundation, and we raise money for a charity called PARC, which is an adult disabilities charity here in the Pinellas County Area. They have been our charity for the entire time that we’ve operated the blues festival, and we are very proud to have raised many hundreds of thousands of dollars for PARC through the blues festival.

That’s really great to know. What are some places your attendees hail from? Is it generally all ages and walks of life?

We do have quite a spread, from teenagers to grandparents, I suppose. It really is every walk of life. The thing I’m proud of is that we have so many people who plan vacations and tourism around our festival that they think it’s an important destination event, and they’re willing to give us their vacation time to do it.

We probably have guests from almost every state in the United States. We have folks from overseas, from Italy, Sweden, Australia, South America, and other points beyond. I don’t know them all, but we do literally have people traveling from all over the world to come to the Tampa Bay Blues Fest, which is quite a treat for us.

And does your April date have anything to do with the Spring weather in Florida?

Well, ok. I will confess. We try and take advantage of the most beautiful time of the year here in Florida. As you know, as a resident, it’s hard to beat early April in Saint Petersburg, Florida.

Of course, they call it the Sunshine City which means it’s normally sunny around here. And in April, it’s warm but not too hot. You usually have some nice, cool breezes blowing in off the Tampa Bay. And it’s about the perfect time of year to be at an outdoor event. The answer is yes; we do take advantage of the perfect weather we typically have in early April here in Florida.