The 20 Best Lines In Songs 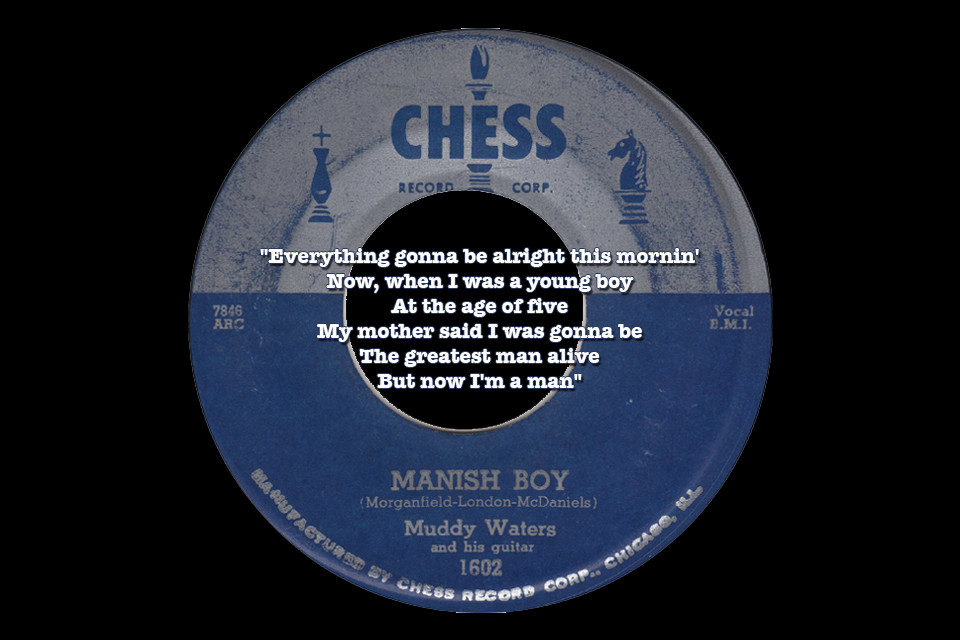 How many times have you been listening to a song and thought to yourself, “Man, that’s a really great line!” We have too, so we brought together 20 songs that feature great lyric lines. Here they are for your edification.

This 1956 Howlin’ Wolf performance has Willie Dixon on the bass and is actually a case of the Wolf taking from Tommy Johnson’s 1928 “Cool Drink of Water Blues.” Wolf’s rendition is almost a droning continuum that uses raised volume and intensity of the band in place of chord changes or other mechanisms to change the dynamics.

“Everything gonna be alright this mornin’
Now, when I was a young boy
At the age of five
My mother said I was gonna be
The greatest man alive
But now I’m a man”

Written by McKinley Morganfield a.k.a. Muddy Waters and Mel London as an answer song to Ellas McDaniel a.k.a. Bo Diddley’s “I’m a Man.” Recorded and released in 1955, this is the only Muddy Waters record between January 1953 and June 1957 not to have Little Walter playing harmonica on it.

3.  “See That My Grave Is Kept Clean” by Blind Lemon Jefferson.

Blind Lemon Jefferson recorded two versions of this song in 1927 and 1928 that differed only slightly. It eventually became one of his most famous works. The great Son House would later use the melody on his recording of “Mississippi County Farm Blues” in 1930, which was the A-side of the so-called “Holy Grail of Lost Recordings,” known as “Clarksdale Moan” on Paramount records. Many artists have covered the song under this title as well as well as “One Kind of Favor” including Bob Dylan, The Grateful Dead, B.B. King, Mike Bloomfield, and even Lou Reed.

4.  “Sympathy for The Devil” by The Rolling Stones

Originally included on 1968’s Beggars Banquet album, the song recounts great tragedies of human history as relayed through the Lucifer’s first-person point of view. From both a lyrical and musical perspective, this song has stood the test of time and remains a favorite among Rolling Stones‘ devotees.

Track one, side one from the album Indianola Mississippi Seeds, the original song is less than a minute and a half long, and these are all the lyrics. Although King was backed by an all-star cast of musicians, he goes solo, singing and playing piano on this opening track. Indianola Mississippi Seeds went on to be one of the greatest blues crossover albums of all time.

“Born under a bad sign, been down since I began to crawl.
If it wasn’t for bad luck, I wouldn’t have no luck at all”

“Born Under a Bad Sign” was recorded on May 17th, 1967 at Stax Studios in Memphis, Tennessee. It was an immediate hit for King, and was subsequently added to his first Stax album by the same name. The song was composed by Booker T. Jones, and the lyrics came from William Bell who said, “We needed a blues song for Albert King – I had this idea in the back of my mind that I was gonna do myself. Astrology and all that stuff was pretty big then. I got this idea that [it] might work.” Both the album and the song have been inducted into the Blues Hall of Fame.

7.  “Too Many Dirty Dishes” by Albert Collins

“I’ve done your dirty dishes
How much am I suppose to take?
When I left I had corn flakes for breakfast
Now there’s a bone from a T-bone steak”

This tale of domestic woe was written by John Newton and performed by Albert Collins a.k.a. “The Iceman,” “The Razor Blade,” and “The Master of the Telecaster.” Released on the Alligator album Cold Snap in 1986, it still brings knowing shakes of the head from boyfriends and husbands the world over. There have been many covers of this song including a partucularly wicked version by Tab Benoit.

From the desk the omnipresent hit writing team of Jerry Leiber and Mike Stoller, this classic was recorded in 1953 and released in 1954 on the Peacock Records label. It has been covered by everyone from Patty Griffen to The White Stripes and Buddy Guy.

Written by Tom Hambridge and Gary Nicholson, this appeared on 2010’s Living Proof album. Buddy Guy is the master at performing songs that express the downside of love and domestic discord. Not only are the lyrics snarky and spot on, we have the added bonus of enjoying Buddy’s hair-raising guitar excursions. Who could ask for more?

First recorded by Billie Holiday as the A-side of a 1939 single issued on the Commodore Records label, this powerful work originated as a poem written by teacher Abel Meeropol. The song was so controversial at the time that Columbia actually granted Holiday a one-session release from her contract so she could record it. They, along with her producer at the time, would not let her record it fearing the backlash from Southern retailers and radio outlets.  The song has been covered by Nina Simone, Jeff Buckley, and many others.

“Heroin, be the death of me
Heroin, it’s my wife and it’s my life
Because a mainer to my vein
Leads to a center in my head
And then I’m better off than dead”

With all the talk of an opiate epidemic these days, this song was light years ahead of its time in describing the depths of hopeless despair and surrender to addiction. Written by Lou Reed, it was originally released on the 1967 debut album The Velvet Underground & Nico on Verve Records. We have posted this intense live version by Lou Reed from his album Rock n Roll Animal released in 1974 on the RCA label.

Johnson recorded his song of futile and unanswered love in 1937 in the last of his recording sessions. The song was eventually released in 1939, two years after his death on a 78 rpm record on the Vocalion label. Another timeless classic, it has been covered by the likes of Eric Clapton, the Rolling Stones, Madeleine Peyroux and more.

“If I don’t love you, baby
Grits ain’t grocery
Eggs ain’t poultry
And Mona Lisa was a man”

Recorded live in 1972 at the Summit Club in Los Angeles after he’d left Chess Records and moved to STAX. This version captures Milton and his guitar at their very best: soulful, passionate, and simply breathtaking.

“I love the tip, I love the top, I love you better than a hog loves slop
‘Cause you’re a big legged woman, with a short short miniskirt
Promise me darlin’, you’ll never make me feel like dirt”

“Big Leg Woman (with a Short Short Mini Skirt)” was written by Israel “Popper Stopper” Tolbert and originally recorded and released by him in 1970. Charlie Musselwhite released his recording of “Big Legged Woman” in 1971. Freddie King released his recording of “Big Legged Woman” on his 1972 album Texas Cannonball on Shelter Records. There’s a reason he was known as “The Texas Cannonball,” and this shows why. His passion and energy were infectious!

Although credited to Allen Cole and Carlton Barrett, the actual authorship is surprisingly complicated. There are a great many people who believe that credit belongs to the Emporer Haile Selassie I who spoke of peace to the United Nations General Assembly in 1963. Whomever ultimately deserves credit for authorship can be debated but one thing is certain: This song is and always has been a powerful plea for equality and recognition for the rights of all peoples.

I jumped up and down on the chest of…
I injured the fur trapper.”

“Nanook Rubs It” appears on Zappa’s 18th album, Apostrophe as part of the “Don’t Eat the Yellow Snow Suite” consisting of the first four tracks. “Don’t Eat the Yellow Snow” transitions into “Nanook Rubs It” whereupon Nanook observes the Fur Trapper, strictly from commercial, jump up from behind his igloo and beat on his favorite baby seal with a lead-filled-snow-shoe. This makes Nanook angry and he gathers a generous mitten full of the deadly yellow snow and rubs it into the Fur Trapper’s “beady little eyes with a vigorous circular motion…” Frank Zappa at his best! After all, who among us would argue that the exclamation “Great Googly Moogly” isn’t priceless?

This song has worn many faces and carried many names through the ages even as its true origins remain uncertain. Perhaps contemporary audiences know the Led Zeppelin version best as it was issued on the now classic Atlantic Records Led Zeppelin III album in 1970. The story is thought to have originated in Europe and “The Maid Freed from the Gallows” is but one of numerous titles given to a centuries-old folk song handed down through the generations and still as relevant today as ever. Leadbelly, Neil Young, Uriah Heep, Peter, Paul and Mary, The Kingston Trio, and many more have recorded their own performances of this ever-metamorphosing classic under differing titles.

Although Let It Be was released after Abbey Road it was actually (mostly) recorded first, making Abbey Road the Beatles’ actual goodbye if you will. Lennon had originally wanted his compositions to reside on one side of the album and McCartney’s on the other. As a compromise, their individual works would be on the “A” side and the now famous medley occupied the better part of the “B” side. Even amid all the infighting and tension, the broken and disintegrating Fab Four still created a masterpiece.

19.  “Be Thankful for What You Got” by William DeVaughn

“Diamond in the back, sunroof top
Diggin the scene
With a gangsta lean, wooh”

Often miscredited to Curtis Mayfield, this was written and performed by William DeVaughn. The original was over 7 minutes long and so when it was released as a single, the singing parts were on the A-Side and the instrumental section(s) on the B-side so radio stations could play a short version that listeners would pay attention to. Among the players on this recording are members of the group MFSB, the same folks who gave us “TSOP (The Sound of Philadelphia)” including guitarist Norman Harris, drummer Earl Young, bassist Ron Baker, and vibist Vince Montana. This 1974 soul classic was part of a vein of soul that was documenting and commenting on the lives of people of color living in urban centers.

20.  “Papa Was Rolling” Stone by The Temptations

“Papa was a rolling stone
Wherever he laid his hat was his home
And when he died, all he left us was alone”

Originally written by songwriters Norman Whitfield and Barrett Strong for Motown artists The Undisputed Truth, the song was released by them in 1972. Later it was recorded as a 12-minute album mix and a nearly 7 minute single by The Temptations, who also released it in 1972. Recorded at Hitsville USA with the Funk Brothers as the backing band, how could you go wrong?

Think we misssed one of YOUR favorites? Well then, just let us know in the Comments section below!