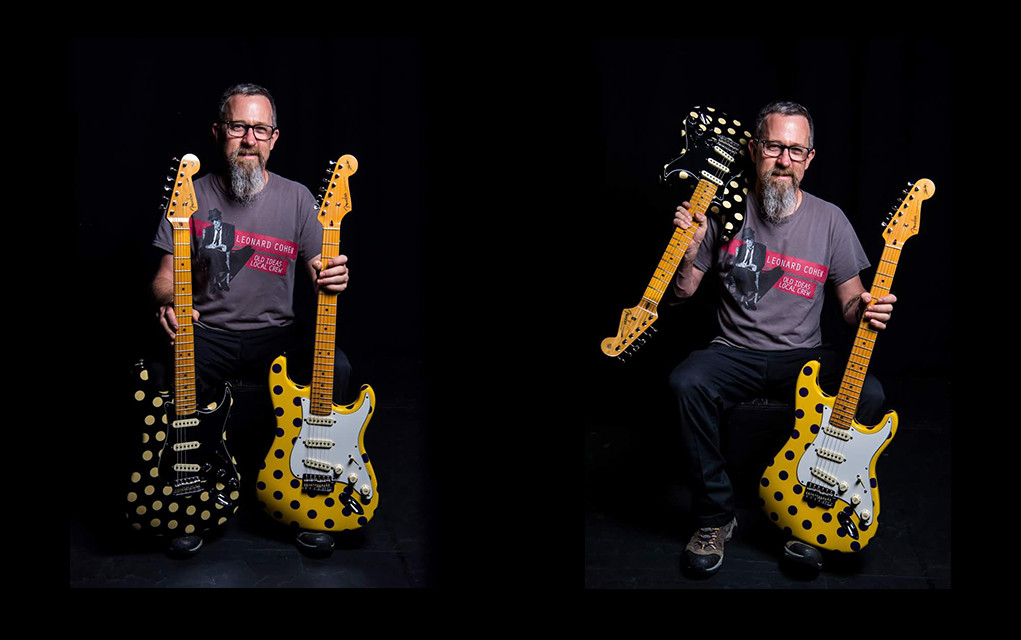 Since his time with Buddy began in 2015 Chris Bynum has traveled the world with the blues master and his black and white polka dot Strat, playing all kinds of gigs in all sorts of places but it was Buddy’s two sets at Byron Bay Bluesfest in 2017 that Bynum remembers as his favorites.

“Byron Bay Bluesfest was a really great gig, and that’s because it was such a great festival. Of all the festivals I’ve been to around the world, I really loved the line-up of music they had, the people there treat you well, they’re organized, the catering was amazing backstage, it’s stuff like that which makes an event.

“Festivals are usually a pain in the ass: It takes a lot of time, there’s confusion, and there are so many people. They’re generally not as much fun to do as a regular standalone theatre gig but Byron Bay was fun because the crowd was into it, and just the whole experience was great. I love Australia, anytime I go to Australia that’s a win for me. We didn’t get near enough time there, we just did that one gig, so we’d love to come back.”

Although Buddy may have been taking his time slow cooking beans during his recent break from touring the world, the 81 year old, spent a few hard working months on his latest album “The Blues is Alive and Well” last year, which hit number one on the Billboard Blues chart last week.

After working with producer Tom Hambridge on the songs, and recording demos with a selection of studio musicians, Buddy, Hambridge, and the team rolled into Blackbird Studios in Nashville for three days of recording, which Bynum recalls as a masterclass.

“The first day I loaded in at Blackbird Studios in Nashville and I set up three amplifiers for Buddy, two were owned by the studio, one was a 100-watt Dumble Steel String Singer, and guitar nerds will know what that is, it’s really a special amplifier. The second one was a little Fender Champ, and the third amp was supposed to be a ’59 Bassman but the one the studio provided sounded horrible and so in luck we’d brought some of Buddy’s amps, and so I put one of Buddy’s amps that he uses on stage, just a standard Fender ‘59 reissue Bassman.

“I hooked them up, and the way I hooked them up is I can isolate each amp, I can turn them off or on, or run them all at the same time. So the first night we got there I sat Buddy down with his cream guitar which was his number one guitar at the time, and we just played each amp until he got it where he liked it, and I never touched them for the rest of the sessions, we just changed guitars, but I never changed the amp settings, I left them all the same. Each morning I’d turn them on, I’d plug Buddy in, run all three of them the way they were, and then the producer and engineer would pick whichever worked best for that particular song or blended them to get the tone that they wanted.

“We did 18 songs in three days! Anyone who’s worked in the studio would know that’s an incredible amount of work.”

With a new hit record under his guitar strap, and adoring fans worldwide, Buddy and company have been playing a number of shows in honour of its release, but rehearsal still isn’t on Buddy’s to do list, one thing that him and Leonard Cohen approach very differently, amongst some big similarities says Bynum.

“He hasn’t rehearsed any of the songs off the new record with the band yet; they learned them on their own, and then he just goes into it. It’s so different to Leonard who we would spend weeks rehearsing, and months perfecting a song before it ever debuted on stage; very opposite. Leonard would do these hour and a half long sound checks with the full band whereas I’ve never seen Buddy at sound check, ever. Not that one is right or one is wrong, it’s just the way two different men do things.

“The other common theme that they both have is that they both respect people, and they both really are trying to carry a message of ‘let’s all be good to one another, let’s all treat each other right.’ I don’t know how much you know about the history of the Southern United States, but 81 years ago Buddy grew up as a sharecropper. His family would grow crops and the owner would take part of the crops as pay for them to live on his property, and then whatever was left over was what they got to keep.

“It was basically like being enslaved in a way, they were so indebted to their plantation owner, and Buddy really didn’t have running water until he was 17 years old. Black people were treated very differently, but I’ve never seen one bit of resentment in him about that, he’s just always like ‘hey look, we’ve got to treat each other right, we’ve got to be nice to each other.’ Leonard was the exact same way. It’s really funny the way the two of them are from completely different backgrounds but so similar in so many ways. Leonard grew up a middle-class Jew in Montreal writing poetry, and Buddy grew up working the fields in South Louisiana, and yet the two intertwined.”

“Leonard actually wrote the letter of recommendation that got me the job with Buddy. I called him and told I was applying for the job with Buddy Guy, and asked if he could help me out, and he wrote a very nice letter of recommendation to Max, Buddy’s manager. When I got the job I texted Leonard’s assistant saying ‘hey, I got the job!’ She told me later after he had passed away that when she told him I’d gotten the job he went over to his bookshelf and pulled out a CD, and it was Buddy Guy’s “Feels Like Rain,” which he loved. One of my big regrets is that I never got to introduce the two of them, because Leonard was a huge, huge blues fan and loved the old blues masters, and I know he would’ve loved to meet Buddy but unfortunately that never happened.”

Although Buddy and Leonard were never introduced, the blues giant has met a number of budding blues players throughout his career. Buddy has dedicated his recent years to giving back to the blues and keeping the genre alive, something he promised the late Muddy Waters he would do, and something that Bynum says he admires greatly.

“The thing that I really love about Buddy is that he does so much to promote the blues and young artists. I mean he’ll bring anybody on stage: If you can play guitar and you want to get up there, he’ll bring you up. He’s brought up Quinn Sullivan, Kingfish, he brought Leilani Kilgore up once, I also remember Dylan Salfer. It’s equal opportunity: man, woman, child; it doesn’t matter. If you want to promote the blues, if you think you can play guitar or play the blues, get on up there. I think that’s the most important thing to him right now at this stage in is life and that’s the thing I love about him.

“He really, really wants to make sure that young people like you, and Kingfish, and Quinn are carrying on the legacy of the blues. He’s so grateful to people like BB King, Muddy Waters, and John Lee Hooker, all the people that taught him and allowed him to get up and play guitar, so he’s trying to repay that, and I think it’s great that he’s doing so. To me, that’s the most special part of Buddy; his genuine sincerity and desire to help people, and [to] promote the blues. He also does a lot of things behind the scenes to help people out, and he’s out there doing it unselfishly.’

Through Buddy’s unselfish, direct, masterful, and lovingly sassy ways Bynum has learned a lot of lessons over the past few years, but none have been greater than his boss’s willingness to be kind, and give back to the people who have so enthusiastically given to him over his 40+ year career.

“What I’ve learned from all great musicians that I’ve worked for is that there’s so much more than the music and the rock star lifestyle, it’s really about how you treat people, trying to make things a little bit better, and what kind of mark you leave on this earth. So once again I go back to Tracy Conover teaching me about music and the blues, and then Leonard really, really trying to change the world, with him it was almost like we were on a five-year quest to try and make things better, and with Buddy it’s the same thing.